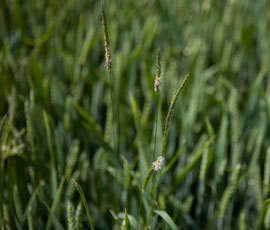 Non-chemical methods of controlling blackgrass will need greater uptake on farm in the future to keep crop production sustainable and profitable in the face of declining chemical control, according to a new study using the Savills and Farmers Weekly Virtual Farm model unveiled at the Cereals 2011 show.

The results showed a steep decline in gross margins, which were all based on 2011 crop prices and costs, once chemical control fell to a level where blackgrass populations were no longer being controlled effectively. “Initially, gross margins are relatively stable, but then you get to a point where you fall off the edge of the cliff,” Mr Makowiecki said.

But using non-chemical control options, such as rotational ploughing, delaying wheat drilling and increasing spring cropping in the rotation, showed that blackgrass populations could be contained sufficiently to allow returns to remain much more stable over the 10-year period, even if chemical control declined by 5%.

Rotational ploughing and increasing spring cropping netted the best margins overall, he said. Delayed drilling had the best impact on blackgrass, but margins suffered from a loss of 0.5t/ha yield in the model.

“But if you can successfully delay drilling without decreasing yields, it is definitely a good option to consider.”

Surprisingly, the model suggested that fallowing was not an economic option, however. “That’s based on current research suggesting you get 70-80% decline in the seed-bank from year to year. Our model suggests that isn’t enough to contain blackgrass, and with the loss in income from one year’s cropping, it doesn’t stack up.

“However, if you get higher levels of control from fallowing, or if it was not used in every field, it could become a better option,” Mr Makowiecki said.