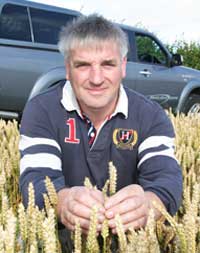 Arable crops that earn a premium and environmental schemes that pay their way are key in helping Cereals 2010 host farmer Robert Law to spread his farming risk, as Robert Harris found out when he visited

Every one of the 1500ha that Robert Law farms on the Cambridgeshire/Hertfordshire border near Royston has to earn its keep.

But this is no wall-to-wall monoculture beloved by the farmer-bashing press. It’s a patchwork of good-sized, workable fields growing premium crops, interspersed with hedges, woodlands and small areas designed to enhance the farm’s flora and fauna.

It’s a mix that makes the most of the mainly light soils in Mr Law’s charge. “Most of our fields are shallow loams overlying chalk,” he says. “Over the past 15 years we have averaged 584mm of rainfall a year, so every year is a drought year.

“That means we have to spread the risk as much as we can. Growing a wide range of crops that the market wants and maximising income on our environmental schemes helps keeps the odds in our favour.”

Arable land runs to about 1100ha, with a further 300ha of grassland, mostly permanent, supporting the 2500-ewe flock.

Cereals include wheat, barley, oats and rye aimed at largely local markets. Just as he likes to minimise physical risks, Mr Law believes marketing is no place to gamble, either.

“We don’t just put crops in on spec. We choose all our varieties with a particular market in mind.”

One-third of the wheats and all the barley and oats go to Jordans, the breakfast cereal and snack bar manufacturer in Bedfordshire, a relationship that stretches back 25 years. Everything is grown to Conservation Grade standards, which includes committing at least 10% of the farmed area to a range of managed wildlife habitats.

The rest of the wheat goes to other local mills. All varieties are soft, and include Consort, Wizard, Ambrosia, Scout and Istabraq.

“You can have a good time with milling wheats when all goes well,” says Mr Law. “But they are too variable and not worth the risk on this land. Provided you get the bushel weights and the retentions with soft wheats, then you are home and dry.”

Sticking with proven varieties helps. Consort has stood the test on droughtier soils. “Like every other variety, yields suffer in a dry year, but it consistently produces good specific weights,” he says.

Wizard, which came off the Recommended List in 2006, remains popular in the area. “It’s reliable in terms of quality and yield. In the appalling harvest of 2008, it was the last variety we combined, but quality and bushel weight were fine. Others had succumbed to sprouting and plunging bushel weights.”

Wheat yields average 9-10t/ha, but last year output ranged from 7 to 12.6t/ha depending on soil type and moisture.

Winter rye, Caratop, travels the furthest of all crops, contracted to Ryvita in Poole. “We have 89ha growing continuously on old gravel pit workings, surrounded by woods. It resists rabbits and geese, and produces about 5t/ha on land that would grow little else.”

The variety is a conventional one – hybrid seed is too expensive for such a return and prevents him saving his own seed. With up to 80% of cereals seed home-saved, that’s a big disadvantage.

Sugar beet has increased in importance in the eight years Mr Law has been growing it, and now fills the 8250t of quota and feeds sheep.

“We’re about where we want to be with beet. It’s a useful crop – we achieved 85t/ha last year, but even in a normal year we should achieve British Sugar’s 70t/ha target, and we can make money at that. We are still growing the crop on virgin land and that makes a huge difference.”

Zero 4 peas are grown for seed, and more unusual seed crops include two varieties of fodder rape as well as stubble turnips and mustard.

“We are growing a lot of different crops. But if I were a wheat/oilseed rape grower big into blackgrass production then I wouldn’t be too happy at the moment,” says Mr Law.

“It’s not second wheat country around here – we try to match a range of crops that suit the farm and spread the risks at the same time. Last year, the rape and turnip crops, along with sugar beet, were the best payers, while winter barley was a disaster. A couple of years ago it was one of our best crops.”

Most land destined for cereals is disced to encourage a good chit then ploughed and pressed before being sown with a Vaderstad 6m disc drill. Late wheats after roots are put in with a power harrow/drill combination, tight behind the plough.

The high cost of machinery and problems with sterile brome mean min-till takes a back seat. “Two passes – plough/press and drilling – that’s min-till to me,” he quips.

However, all fodder rape and stubble turnip seed crops are established using a Sumo subsoiler with seeder box. “We try to get the Sumo drill onto areas that we have to subsoil, once every three years.”

GPS technology is making more of a mark. All land is mapped by Soyl for P, K and Mg. Variable rate fertiliser applications were first used in 1993, evening out big fluctuations in P and K indices. N sensing is being trialled this season.

The combine has yield mapping, which helps to further fine-tune inputs and highlights consistently lower-yielding areas.

Many of these have been put into environmental schemes, along with other areas like field corners and land next to woods that never grow a decent crop.

“Provided they are put in the right place and managed in the right way, environmental schemes can pay just as well as cropping,” says Mr Law.

“I’m a businessman – I have a rent to pay and a mortgage to meet so it’s important to manage these schemes as a crop, carefully examining the options in every location.”

Eighteen environmental schemes are on the go across his farms, producing an annual income of £80,000. All land is in Entry Level Scheme or Countryside Stewardship, and 40ha of woodland has been restored and planted in the past eight years through forestry schemes.

Total of 1500ha in Royston area

Other crops: fodder rape for seed, stubble turnips for seed and mustard (90ha)

Most land farmed on a first wheat/break rotation. Some sandier land on a three-year rotation with winter barley as a second cereal.

Strutt & Parker’s Sam Harvey looks after all the agronomy on the farms.

Blackgrass is not a big problem and where it does occur it remains easy to kill.

Wheats receive a four-spray fungicide programme as standard. This season’s T0 was 1 litre/ha of Cherokee, 375g of chlorothalonil plus cheap, fast-moving triazole chemistry for early rust and septoria tritici control.

The T1 timing was variety-tailored, based on half-rate epoxiconazole rather than prothioconazole given the yellow rust pressure. Tracker at 1 litre/ha or Opus at 0.5 litres/ha were used, plus 500g chlorothalonil and mildewicide where necessary.

T2 will be three-quarter rate epoxiconazole as Opus, or Ennobe at 1.5 litres/ha to include prochloraz for septoria tritici sensitivity issues. A strobilurin will also be included, either azoxystrobin or pyraclostrobin. Rubric will be used as a reliable generic epoxiconazole.

T3 is considered a key timing as all of Mr Law’s wheat is destined for human consumption. “We cannot take any risk with mycotoxins. Although we may be in a dry area, all our wheats will get an ear spray to control fusarium.”

Barley gets a two-spray programme. Cyprodinil plus prothioconazole is the usual choice for rynchosporium, net blotch and brown rust protection but Mr Law will try Bontima, Syngenta’s recently launched fungicide, this season.

No chlormequat is allowed under Conservation Grade protocols, so Moddus is used at split low doses to keep wheats standing, at 0.15 litres/ha.