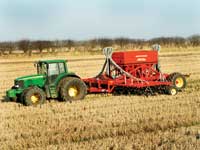 Establishing a crop with a no-till drill helps create an open soil structure, and because it’s easier to pull growers can save time and fuel.

But while no-till is good for the soil and the pocket, it also plays into the hands of troublesome grassweeds. Speaking at a recent controlled traffic farming workshop, independent agronomist Ruth East from Lincolnshire urged visitors to take a hard line with grassweed control.

The loss of key grassweed killers such as IPU, building resistance to current chemistry and the threat of more being lost to the Water Framework Directive meant growers would have to consider adding cultural controls to their strategy. Using higher seed-rates to increase competition, delayed drilling to encourage seeds to chit and spring cropping would help bolster control. But in extreme cases, rotational ploughing would be the only option, she said.

Blackgrass was the main concern with cases of resistance to key blackgrass killer Altantis (mesosulfuron + iodosulfuron) increasing, said Miss East. “I carried out eight tests on blackgrass populations in 2009 and they all came back positive for Atlantis resistance,” she said. “If you’ve got a blackgrass problem you need to get it tested – you can then come up with a strategy that works.”

Where resistance occurred, growers needed to take an integrated approach, using chemical and cultural controls, she said. Cultural controls included upping seed rates to increase competition against the weed. This helped steady blackgrass development, but increased straw yields which could then block some no-till drills, she noted.

Planting break crops such as oilseed rape allowed alternative products such as propyzamide and carbetamide to be used. “They also add different chemistry into the programme, helping to prevent resistance build-up,” she said. “But you need to watch out for the residual effect of these products in following crops.”

Spring cropping allowed an extended fallow period for blackgrass seeds to germinate, she said. “It’s also less competitive in a spring crop, as there is a shorter growing period.

Hygiene was also an important consideration and growers needed to check they were planting clean seed and all combines working on the farm were blackgrass-free. This was a particular concern when using contractors; pea viners were also a contamination source, she said.

But where the problem was bad, growers would have to resort to inversion cultivation, he said. “90% of seed germinates in the top 2.5-5cm of soil so the best way to prevent germination is to bury it.”

Using chemistry carefully would improve efficacy, reduce the risk of resistance build-up and compliment cultural control methods. “Optimising doses, applying products at the right time and in favourable soil conditions and weather is critical,” she said.

“You need to keep checking herbicide performance and if products stop working try and find out why. Get plants lab-tested and keep comprehensive herbicide efficacy records along with detailed maps of weed patches.”

Avadex (triallate) gave good control and there was no evidence of resistance, she said. “It’s the base of a very good programme and works well with CTF wheelings as you can spread to 24m.”

Brome species were a concern, but there is less pressure than blackgrass, she said. “Growers need to adopt a similar approach to blackgrass control; populations are often highest on headlands and they can consider mowing these areas or applying glyphosate with a knapsack sprayer.”

There was still effective chemistry to control wild oats and populations were less likely to spread, she said. “You also have the option to hand rogue.”

Masstock agronomist Andrew Murdock acknowledged the blackgrass threat, but reckoned it could be controlled without taking drastic action. “If you have a problem with blackgrass control you don’t have to resort to the plough – you need to come up with some lateral control and think carefully about crop rotations.”

Chemistry was a concern, but effective control was possible albeit at a bit of a compromise, he said. “If it means leaving ground fallow over winter and establishing a spring crop, so be it.”

Test your knowledge on managing blackgrass resistance see our Academy on the subject, click here.