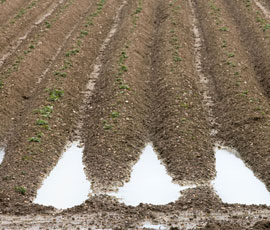 The unsettled weather has continued for many this week, providing tricky ground conditions and narrow work windows and our Crop Watch agronomists have some tough decisions to make.

Potato planting is a long way behind, especially on heavier land that becomes increasingly difficult to work in the wet.

“The dilemma is whether to move soil to dry it out, but you run the risk of getting it wet again which can put you back to square one,” says John Sarup of Spud Agronomy.

Fertiliser rates and seed spacing as planting is further delayed are cast into doubt, with many growers asking Mr Sarup for advice. However, Mr Sarup comments that it is not always straight forward.

“My view is that you should take each variety and field separately, focusing on compaction in the field and agronomic characteristics of the variety grown.

“As a rule of thumb you might consider increasing seed spacing by 10% for main crop varieties once the end of May approaches, however, I believe there is a limit once you get to 42-43cms.

“Any gaps or planter misses result in unproductive land, which impacts on overall yield,” he explains.

Fertiliser is more challenging, he notes, but growers might consider reducing nitrogen by 10-15kgs/ha for each week planting is delayed after mid-May.

Maize drilling is also slow going, especially in the South West where it is generally a month behind compared with recent years.

“Some crops were drilled in early April and are still struggling to emerge. These crops may be OK but I think on balance the seed may have been better still in the bag,” says Neil Potts of Matford Arable in Devon.

“Only time will tell if the early drilled maize will make a good crop.”

In cereals, the debate on fungicide timings rumbles on, with the major delay in many T1 applications leaving growers with the temptation to stretch the T2 spray beyond flag leaf emergence.

“My view is a definite no,” says Nick Brown of ProCam, who covers Berkshire and Oxfordshire. “Disease pressure, especially septoria, is high and the flag leaf is responsible for 50% of yield.”

Mr Brown points out that the SDHIs, although offering better kickback than the triazoles still give their best yield response at growth stage 39.

“In most cases I will base my T2 around an SDHI, using either a fluxapyroxad or isopyrozam-based product depending on disease pressure and yield potential.”

This is the case for AICC agronomist in Perthshire, Hamish Coutts, when considering his winter barley area, where awns are now appearing. “Any crops not recently sprayed will require treatment for rhynchosporium and ramularia,” he says.

“An SDHI plus triazole, with the possible inclusion of chlorothalonil, will be sufficient. The problem will be deciding which spray job is the most pressing.”

The UK sugar beet area has not escaped the wrath of the recent bad weather, with crops struggling to grow away, leaving them exposed to pigeon grazing and rapidly emerging weeds.

Agrii agronomist Will Foss says that the majority of the sugar beet area was being treated with a herbicide over the weekend of 12 and 13 May.

“In many cases it would have been the first post-emergence herbicide treatment, based on Broadacre or modified Broadacre-type programme.

“Activity on weeds, some of which were getting quite sizeable, will need to be assessed over the coming days and if necessary another treatment should be applied on a relatively short interval to try and get on top of large polygonums,” he says.

For more from our Crop Watch agronomists see their blog