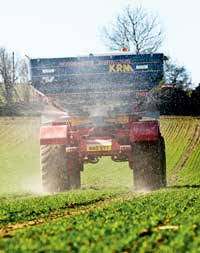 Kick-starting crops after the winter chill is top priority for our Crop Watch agronomists this week as well as protecting oilseed rape from pigeon damage.

In Kent, oilseed rape crops had been opened up by cold weather and were being hammered by pigeons, said Masstock agronomist Colin Sharp. “To compensate for leaf loss, we’ll be prioritising these crops for early spring nitrogen, with sulphur wherever required, as soon as we can get on the ground.”

Nutrient demand would be high when crops started growing and soil temperatures were still low, he said. “We’ll be keeping boron, molybdenum, magnesium and manganese levels up to scratch with an early foliar spray, accompanied by Nutriphite PGA to help encourage fresh rooting and to maximise nutrient efficiency.”

Arable Alliance agronomist David Martindale, from Yorkshire, said some winter oat crops had been battered by frosts and some fields would need to be re-drilled with a spring crop. Some winter bean crops had also suffered, and plant populations needed to be checked thoroughly before deciding whether to re-drill, he said.


Manganese needed to be applied to deficient wheat crops as soon as conditions allowed, he added. “It is always best to try and stay ahead of seeing any deficiency symptoms.”

Frost lift was a problem on some soil types, and he was encouraging growers to do more spring rolling than usual. “Applications of chlorpyrifos are now due on high-risk sites, as wheat bulb fly egg hatch has started.”

The spring drilling campaign had begun and a few spring barley crops had already been drilled, he said. Spring oat seed was becoming scarce due to the high number of winter oat crop failures, he noted.

In the west, phoma had appeared on older leaves in a number of oilseed rape crops, said Dan Dines from Wessex Agronomy Services in Wiltshire. “Given this and the forecast for increased light leaf spot incidence in our region, it is likely that most crops will receive a fungicide this month.”

To kickstart small oilseed rape crops, a small dose of nitrogen would be applied in mid-February, as long as weather allowed, he said. “These crops also need protecting from pigeons.”

Spring barley drilling would start on lighter ground once there was a suitable weather window, but growers should avoid forcing seed-beds, he warned.

Nitrogen programmes were being finalised for the spring and the new RB209 gave scope to increase recommendations this season according to the nitrogen/grain price ratio, he said. However, individual farm knowledge – like historic grain protein levels and yield – also needed to be considered, he added.

Swaran Bachoo, Agrovista agronomist in Hampshire, said there had been some tiller loss in winter barley crops, particularly Cassata. “It would be wise to apply some nitrogen once active growth has started to help promote new tillers and retain existing ones. Tiller number is crucial for maintaining yield potential in barley.”

Oilseed rape crops that only had one application of fungicide were showing phoma lesions and would need to be treated with a good fungicide, he said.

Light leaf spot was appearing in some fields and should be treated with prothioconazole and flusilazole, he said. Pigeon foraging was also a problem in his area, particularly on backward crops and urgent control was needed, he added.