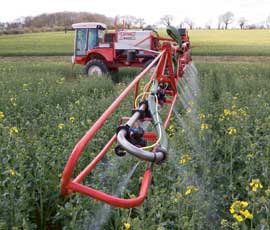 An early explosion in pollen beetle numbers means growers should monitor oilseed rape crops carefully and spray as soon as the threshold of 15 beetles a plant is reached, according to our Crop Watch agronomists.

In Buckinghamshire, winter oilseed rape crops were well into stem extension and pollen beetle numbers had exploded in the area due to the unseasonably warm conditions, said ProCam agronomist Nick Brown.

Increasing resistance of the pest to pyrethroid insecticides meant control could be difficult in some areas, he noted. “If problems controlling pollen beetle have been experienced in the past, other insecticides with different modes of action should be used.”

Further north, AICC agronomist Patrick Stephenson from Yorkshire was finding dead hearts in wheat due to wheat bulb fly infestation, even where chlorpyrifos had been applied. “Some crops have been badly affected and it will take extra care to nurse them through.”

Yellow rust had been found in some crops on the Yorkshire Wolds, but hadn’t been spotted any further north, he said. “T0 sprays are scheduled for next week on susceptible varieties.”

Some winter barley crops were suffering from leaf discolouration due to the dry weather and large temperature swings, he noted. “Disease and growth regulators will be scheduled for later in the month and some will receive the new SDHI chemistry.”

In Suffolk, Frontier agronomist Brian Ross reckoned some crops would be ready for their T0 fungicide by the end of the week. “Yellow rust has been seen both in Oakley and Robigus, which reinforces my belief that T0s are vital this year, especially as around 60% of the varieties in the ground are rust susceptible.”

Sugar beet had been planted in ideal conditions and all pre-emergence sprays had been applied, he said. “Remember to get all the nitrogen on at full cotyledon, as delaying can decrease yield and potentially scorch cupped leafs where they are present.”

Winter linseed crops were looking particularly well in Shropshire, said AICC agronomist Bryce Rham. “They are branching out well — some are now 15cm tall with good ground coverage. Winter losses are about 2-3% of plants, certainly no higher.”

Pollen beetle were present in the area, but he had not found any fields at threshold levels. “With frosts at night and day temperatures not set to get above 15C, I suspect that most of my crops will not need spraying.

“However, I will keep an eye on late-sown crops or those that have suffered from pigeon damage, as these may be at risk due to the lateness of coming into bud.”