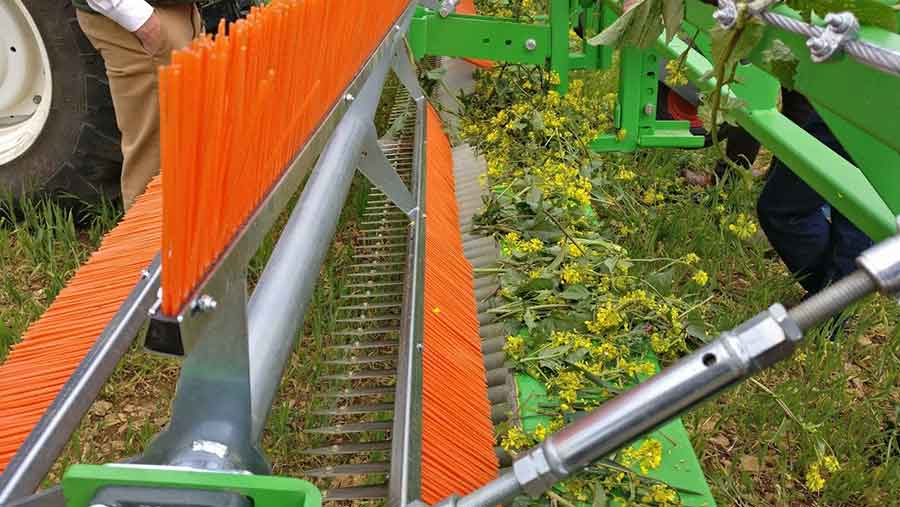 Four mechanical weeders were put through their paces on organic arable land at the Royal Agriculture University research farm as part of a demonstration day.

Hosted in collaboration with Innovative Farmers, a farmer-led research organisation supported by the Soil Association, the event was an opportunity to see both high- and low-tech machines being put through their paces.

With chemical weed control coming under pressure from resistance problems and regulators, a return to other forms of control as part of a broader range of integrated control measures may become the norm in the future for conventional and organic growers.

This 12m comb harrow from Opico was the widest offering on display and will look familiar to many as a tool for grassland rejuvenation, but has also historically been used for weed control.

Another machine designed to go at high speeds was this French creation from manufacturer Carré, and brought into the UK by Lincolnshire-based TRP Imports, is designed to throw shallow-rooted weeds out of the ground while leaving the deeper-rooted crop behind.

The most visually interesting implement was the Swedish designed Combcut selective weed mower, designed to separate and cut down stemmy weeds from among both grassland and arable crops.

The most high-tech machine was the inter-row hoe from Garford Farm Machinery, which uses a forward-looking camera to keep legs working between the rows of any precision-planted crop.