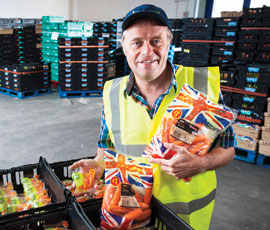 East Yorkshire grower Guy Poskitt has been named as the 2012 Farmers Weekly Farmer of the Year.

Guy, who is one of the largest carrot producers in the country operating across more than 2,600ha of land across Yorkshire, Lancashire and Scotland, was presented with his award at a glittering ceremony in London on Thursday (4 October).

He also walked away with a trophy for Arable Farmer of the Year.

Farmers Weekly editor Jane King said Guy and his family had built a phenomenal, sustainable business by innovating within the supply chain.

The business is a leader in carrot production, providing season-long crops to Asda and a range of customer outlets.

More than 500ha of carrots are complemented by 1,600ha of arable crops, which are needed to ensure a sustainable one-in-seven carrot rotation. Cropping includes everything from potatoes to parsnips, beet to barley.

All root crops are washed, packed and distributed from one site to ensure control in all aspects of production. And there isn’t anything from these crops that goes to waste; rejects are processed as ready-to-cook batons and shavings go into soup.

The judges said that Guy had worked with his customers, collaborated with buyers and farmers and sought added-value and cost saving opportunities at every turn to create a business that has increased three-fold in the past decade.

Turnover now totals £32m, following a major expansion of both the vegetable and arable enterprises.

Guy accepted his award from TV chef and farmer’s son James Martin. The evening was hosted by Lord Sebastian Coe, the chairman of the London Organising Committee for the 2012 Olympic Games (LOCOG).

The full list of winners of the 2012 Farmers Weekly Awards is: