Oilseed rape growers need to fine-tune their spring applications of fertiliser and growth regulator to avoid them getting too lush after a kind autumn and winter.

Adjusting inputs on a field-by-field basis is an essential part of the strategy for Matt Solley, of JS Crop, who farms 2,225ha of owned and contracted land just a few minutes’ drive from the white cliffs of Dover in Kent.

He says rapeseed crops have motored away this season after growth started a full month earlier than in 2016, when arid conditions left August-planted seed sat in the ground until mid-September.

“Conditions are so different this year, it is ridiculously forward,” says Mr Solley. “This autumn it was drilled into moisture and didn’t look back.”

Check out the state of the crop for yourself by watching the video:

Bigger crops mean there is more nitrogen stored in the plant, and a mild winter could have caused more to be mineralised in the soil as well, but heavy rains could have leached some of this away.

Frontier agronomist Nick Peters, who walks a portion of the 690ha of oilseed rape managed by Mr Solley, said that last spring there was between 180-220kg/ha of N applied to crops in two splits. 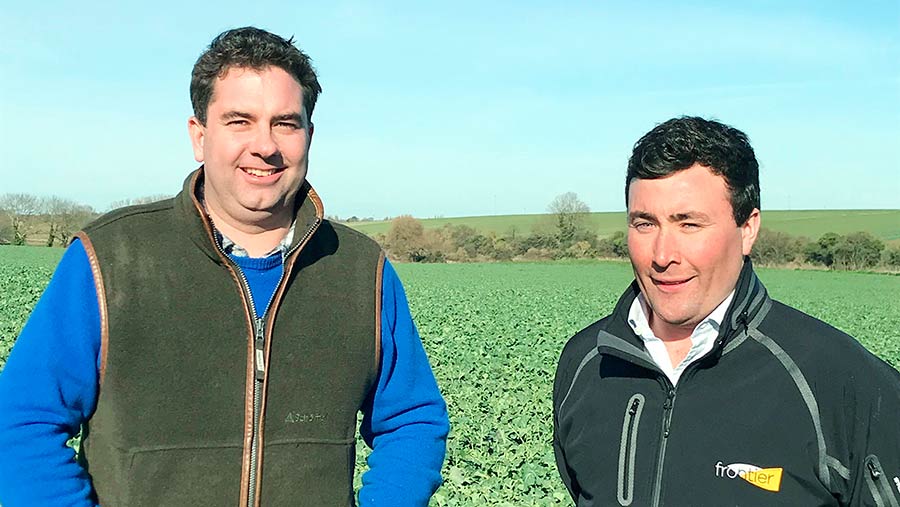 After walking crops and taking green area index (GAI) measurements this year, he expects the amount applied to be lower, but is still waiting for soil mineralisation data from the nearby Frontier research site.

Residual nitrogen from previous crops will also be a factor, and he says that with some cereal crops having failed to hit their yield potential last year, then this could be higher than average.

The first application of bagged fertiliser is set to go on in late February, with the second split as late as possible in March before flying prills will cause damage to plant heads.

Mr Peters cautioned growers not to delay the first application too long after the soil temperature is above 5C even with growth looking forward.

“There is a fine line between going too early and too late,” he says, explaining that early applications will increase the lodging risk. But if the crop is allowed to run out of steam, the plant will be shocked into entering its reproductive phase and bolt.

Early signs of light leaf spot are also being seen in Kent with Mr Peters saying that although there are no visible signs of lesions on crops at this stage, he is seeing it in incubated leaf samples.

“We will be looking to apply a fungicide when it warms up at the end of February – it is showing up in 20% of samples at the moment and the threshold for treatment has traditionally been 25%.”

Mr Solley is growing a mixture of Elgar and Extrovert, with a big factor in their selection being strong disease resistance, as each have a chart-topping score of 7.

However, his approach is to preserve gross margin by giving crops the gold-standard treatment and is planning on a prothioconazole + tebuconazole mix, as his first spring spray application.

Different mixes will be tailored for different conditions, with a greater proportion of tebuconazole used where crop height is more of an issue.

However, once the green bud stage is reached the focus will switch from controlling height to managing the canopy, with applications of mepiquat + metconazole at every 3-4 weeks until the yellow bud stage.

Mr Peters says this will allow more light to penetrate further down the plant and encourage the development of yield-increasing side branches.