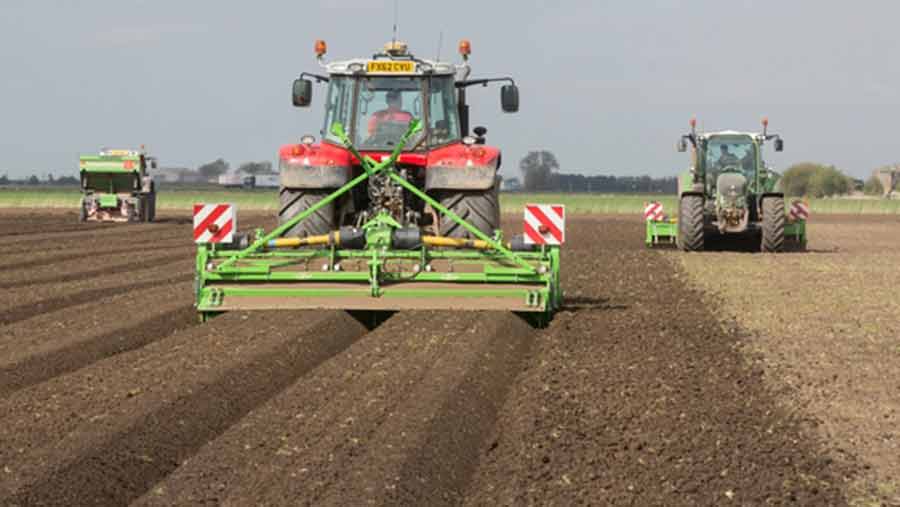 An investigation into the best cultivation strategies for potato production has found that growers could make savings without affecting yields by cultivating shallower.

The trial looked at how cultivation changes affected crop growth, yield and quality as well as fuel costs, speed of work and wear and tear of machinery.

Niab CUF research scientist Mark Stalham said it could be possible for growers to cultivate at a shallow depth, saving time and money without hurting yields.

“We want to try and understand why growers cultivate so intensively for potatoes. Largely this is for the packing trade where we want to have fine soils to avoid damaging diseases like common scab.

“However the findings over the past three years of the AHDB Potatoes-sponsored work is that we can cultivate appreciably shallower and actually maintain yield and quality and harvest potatoes.”

Wet conditions last April meant that the majority of the trial field was ploughed to a depth of 35cm. Meanwhile a smaller area was ploughed at a shallower depth of 25cm and another section was non-inversion tilled with a Simba SL.

“These primary cultivations have shown no effect on yield tuber grading or size distribution,” says Dr Stalham but he notes there was an increase in fuel use and a slowing of work rate when machinery was working on non-inversion tilled area compared to the ploughed areas of the field.

While bed-forming, the trial found that working at the shallow depth rather than commercial practice gave a significant increase in work speed and slashed labour and fuel costs by 23%.

“Deep-bed tilling was very, very costly in terms of fuel and cost – about £34/ha versus shallow-bed tilling, which worked out at about £13/ha,” says Dr Stalham.

He adds that the work speed of shallow-bed tilling was 48% faster than the same work done at the commercial depth.

“De-stoning is the most costly and slow of all the operations and we found that shallow de-stoning was about 43% faster than the standard depth used commercially and it saved 32% of the costs of the standard system.”

Crop yield was maintained over all different cultivations techniques but big cost and work speed advantages were found when cultivating shallower. Dr Stalham says this timeliness could really benefit growers in trickier seasons.

“The deeper we bed tilled, the lower the yield. So actually by avoiding bed-tilling we achieve adequate seed-beds, reduced costs by eliminating this operation and got better yields.”

“At standard depths or shallower, we can actually get away with no bed-tilling or going much shallower than current practice.”

Watch the video for all the trial findings