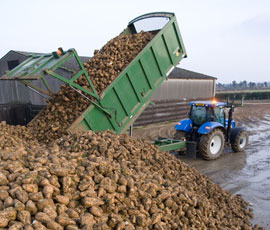 Sugar beet seed that emerged erratically this spring underwent rigorous germination tests before it was sold to farmers, says the processing company.

Farmers have complained that some crops are emerging at less than half the targeted 100,000 plants /ha – forcing growers to redrill or face an uncertain harvest.

At least six sugar beet varieties from more than one seed house have been affected.

Seed for all sugar beet grown for British Sugar in the UK is primed and pelleted by Germains Seed Technology, a Norfolk processor owned by British Sugar parent company ABF.

Germains told Farmers Weekly all the seed it processed was subjected to strict tests.

“All seed bulks processed by Germains for the UK market, pass through rigorous quality test and quality assurance controls for germination,” it said in a statement.

Those tests and controls were externally recognised by and accredited to the International Seed Testing Association standard, said the statement.

“All seed bulks processed by Germains for the UK market, pass through rigorous quality test and quality assurance controls for germination.”
Germains statement

“Average laboratory germination across all varieties was 97.8% in line with that of previous years and well in excess of the 90% germination specification agreed with industry stakeholders.”

Germains said it was “very closely” with the NFU, British Sugar, the British Beet Research Organisation and seed breeders to evaluate and understand the cause of emergence problems.

An independent scientific review commissioned by the BBRO will attempt to mimic the challenging field conditions when beet was drilled this spring.

Results will be made available to growers once completed.

With a mean temperature of just 2.2C, this March was the UK’s joint second coldest since records began over 100 years ago. It was also drier than usual with 62.1mm of rain, 65% of average.

“We recommend that growers follow the BBRO advice on re-drilling where plant populations are considered to be less than acceptable,” said Germains.

“If a grower has concerns about emergence of their drilled sugar beet, they should contact their British Sugar area manager,” it added.