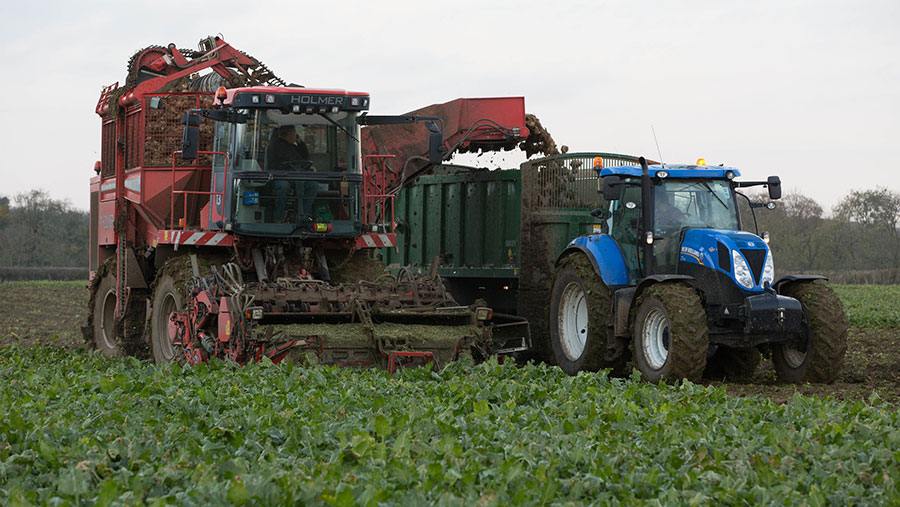 This season’s bumper sugar beet harvest is progressing well with about one-third of the 107,000ha planted now out of the ground and a quarter of the crop already processed.

In Long Sutton, Julian and Stafford Proctor have seen good harvesting conditions with half of the 170ha they are growing this year already lifted, with average yields surging from 75t/ha to 95t/ha between September and November.

They say they normally hit 100t/ha on one field per year, but are hoping for two or three to break the barrier this season.

The father-and-son partnership oversee operations at Proctor Bros (Long Sutton), a 2,000ha mix of owned and rented land on light and heavy land in south Lincolnshire.

Sugar beet forms part of an eight-year rotation on their lighter land, alongside potatoes, peas, and a small amount of mustard, with the heavier land being home to combinable cropping.

Test digs and harvest results mean they are confident of exceeding their 14,000t British Sugar quota, with good growing conditions through the summer coming as a relief after a difficult spring.

Beet drilling this season was completed by the middle of April, and Stafford says conditions were difficult after the prolonged spell of dry weather meant some of the seed didn’t go into sufficient moisture.

“In hindsight, we wished it had gone in by 1 April, as establishment was about 70% rather than the 80% we were looking for,” he says.

However, the weather eventually came to the rescue, with regular rainfall alongside prolonged periods of sunshine meaning they are hoping for a number of fields will break through the 100t/ha barrier.

And with sugar levels exceeding 18%, well above the benchmark figure of 16%, they say the gross margin achieved from the crop could get close to £1,500/ha.

That would be an improvement on the previous five years. when tight prices have seen gross margins nearer £1,100.

Dan Downs, British Sugar’s head of agriculture for the Wissington factory region, says the factory’s 900 growers are likely to average about 85t/ha this season, but expects several to hit 100t/ha even outside the most fertile areas. 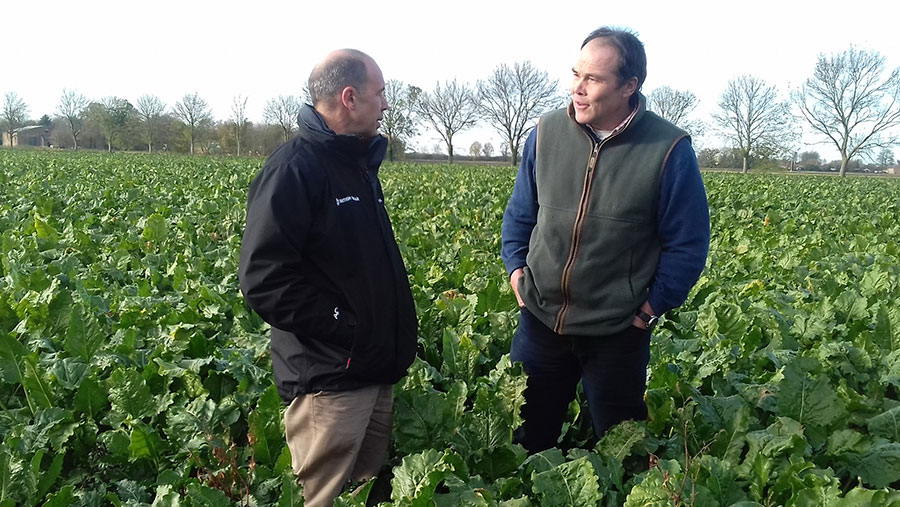 Sugar beet processing is about 25% complete after a difficult start to the season in late September when teething problems with new equipment took a few weeks to fully resolve.

The factory is now back to normal operations, Mr Downs says, with about 800 lorries coming through the gates daily and a processing speed of 750t/hour.

They kicked off this year on 21 September, just nine days later than their earliest ever start in 2014, the last year the factory was operating with a normal crop area, after a record-breaking yield that year saw contracted areas slashed in 2015 and 2016.

The increased throughput this season is likely to add another five weeks to the campaign at Wissington, but the most recent update from British Sugar’s parent company, AB Foods, doesn’t forecast the total UK output to quite beat the 2014 record.

Mr Downs says the company is upbeat about the prospects for increasing domestic market share and selling overseas with the demise of the quota system.

British sugar beet farmers are already the most efficient in the world according to market intelligence firm LMC international, and this can hopefully power them to take advantage of the changing system.

UK sugar beet farmers produce 60% of the sugar consumed in the UK, and he thinks increasing this to 75% would be a reasonable target while also looking to exercise our new right to sell into the EU.

Despite sugar consumption per person falling, the global consumption of sugar is rising between 1-2m tonnes per year thanks to a growing world population.