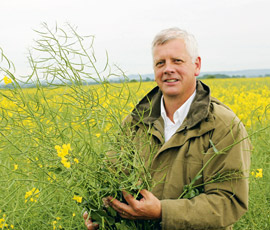 The wide range of flowering and pod maturity in oilseed rape this season means the timing of desiccation sprays will be critical, with growers advised to split timings in worst affected areas.

The UK has never seen the breadth and diversity of flowering experienced this year, according to Openfield arable technical manager David Leaper, who says getting the desiccation timing wrong and going too early could cut yields up to 10%.

“Growers not only face yield reductions but you tend to see more red seed in the crop if you desiccate too early, which could lead to rejection,” he says.

Desiccation has proved one of the most effective and cost-efficient ways of speeding up the natural senescence of an oilseed rape crop.

The overall effect it to dry up all the green material in a field, easing combining and reducing contamination. Timing is key in order to allow enough time for the pods to fill.

Mr Leaper suggests growers should be assessing their fields now to plan the timing of their desiccation sprays, especially with many thin crops with a large number of side branches.

“There will be different levels of maturity within the canopy with the branches maturing much later than the main raceme,” he says.

Glyphosate (Roundup) is likely to be the most popular choice, according to Mr Leaper, as it offers growers a relatively cheap and efficient way of speeding up the natural senescence of the crop.

“The majority of the market has moved towards desiccation (over swathing) because you have a canopy that is kept above the ground and you are using the stems and natural air movement within the canopy to facilitate desiccation,” Mr Leaper says.

“Where we have seen diquat being typically used is where we have very uneven crops due to lodging and you’re compromised using glyphosate because the kinking of the stems limits the translocation of glyphosate,” he adds.

As the use of glyphosate is a benign and slow process – which takes typically two to four weeks to work – the oilseed rape pods are more likely to be rubbery and less likely to shatter, he says.

“Because of the additional branching, we recommend you should be taking a representative sample not just from the terminal spikelet but also more from the canopy. Normally you are looking at having two-thirds of the pods turning from green to brown within that sample,” he says.

Conditions when spraying glyphosate must also be taken into account.

“Because glyphosate affects photosynthesis it is best to put it on in the morning, particularly if there is a dew, so it has a whole day to work,” Mr Leapers says.

“It’s critical you avoid the heat of the day because it works best when it sits on the leaf in a film of moisture so it diffuses across the cuticle. If it dries it sits their as a salt on the leaf,” he explains.

Mr Leaper suggests a lower rate of glyphosate for straight desiccation and a higher rate where weed populations are large.

“After the late spring and slow growing conditions, a few extra days could make a significant difference,” he says.

Those choosing desiccation will need patience and Mr Leaper admits it’s looking likely the oilseed rape harvest will clash with the wheat harvest.

“The speed of desiccation is always frustrating for grower. It is dependent on light conditions. If you have low light then the speed of photosynthesis will be slow, low transpiration and low speed of kill. You will start to see an effect after two weeks but you often have to leave it up to a month,” he says.

The option of a pod sealant application is one that will be popular this year, according to Mr Leaper, who says mixing with glyphosate is what most growers will choose, although with the breadth of maturity growers may choose to go two weeks early.

“It may be a case of going on two weeks prior to the Roundup application. However, growers will be wary of having to do two passes on the crop,” he says.

Mr Leaper notes there is no evidence to suggest pod sealant products affect the desiccation process but says those with pod shatter resistant varieties will probably be OK without.