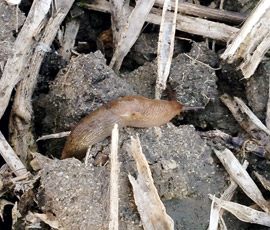 Farmers are fighting what seems like an unwinnable war against slugs, with crops being grazed off as they emerge and widespread signs of seed hollowing.

A wet April, the a key breeding time for slugs, coupled with continued rain this summer and autumn has proved perfect for slugs with populations at record highs. And growers are being warned not to become complacent, even if battle seems to be won.

Farmacy agronomist Philip Vickers advises farmers to keep a very close eye on their slug problems checking at least every other day such is the nature of the damage they can cause.

“You have to be relentless until the crop is 100% established, it’s vitally important not to back off and be extremely vigilant,” he says.

One of the most lethal weapons in growers’ armoury is metaldehyde. A cheaper alternative to methiocarb and ferric phosphate, it has been sold in large amounts this year. However, there are fears it will be found in surface water.

“You have to be relentless until the crop is 100% established, it’s vitally important not to back off and be extremely vigilant.”
Philip Vickers, Farmacy

The autumn limit for metaldehyde applications (1 August to 31 December) is a maximum total of 210g/ha of the active ingredient, which may be reduced to 160g/ha or less upon the recommendation of a supplier or BASIS qualified advisor. At 160g/ha this means no more than 4kg/ha of a 4% product, 5kg/ha of a 3% or 10kg of a 1.5%.

Ferric phosphate is a more environmentally sound alternative which is growing in stature and seeing more farmers using it this year, says Mr Vickers.

“From what I’ve seen so far, it certainly matches metaldehyde if not bettering it. Confidence is growing in it and although it’s more expensive than metaldehyde there’s certainly being a reduction over the past few years.”

Mr Vickers highlighted how this year’s weather and slug problems had shown some of the frailties of the newer cultivations techniques particularly in oilseed rape.

“Traditional methods such as ploughing have faired much better in these conditions. Fields that have been ploughed have drained much quicker reducing the amount of time they’ve been waterlogged and ultimately this will pay off come next harvest.”