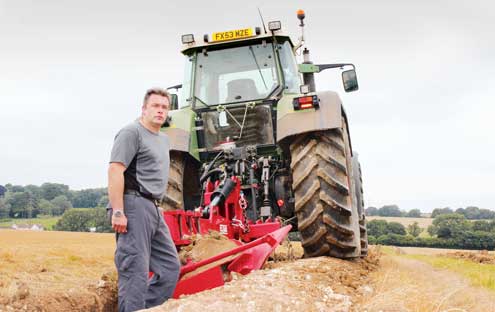 A farmer has dug trenches around his fields in a novel way to ward off poachers and stop joyriders damaging his crops.

“We used to get two ‘hits’ a week from joyriders charging across the farm in four-wheel-drive vehicles, but since we’ve been trenching the perimeters of fields our problems have stopped overnight,” said Mr Gardner.

Two students were employed last summer and trained to use a 3t mini digger to prepare the way. They dug 2,000m in 10 days at key, main road sites.

To complete the trenching, Mr Gardner purchased a single-furrow “forestry” plough for £10,000 from Clarke Engineering in Scotland last summer. The plough has a 60cm furrow and it is capable of digging trenches up to 2ft deep, leaving the spoil to one side.

Mr Gardner had considered fencing off his fields, similar to Berkshire farmer Colin Rayner who was featured in Farmers Weekly on 24 August, 2012. However, he decided it was too expensive.

“No-one wants to trench their farm, but what else do you do? Either you have people riding roughshod over your fields or you do something about it,” said Mr Gardner. “For us, trenching was the cheapest, most effective way of solving the problem.”

While trenching he leaves a gap of about 6-8m on each field to allow farm machinery to enter and exit. Some fields have to be gated and/or protected by posts.

He feels trespassers will think twice about entering fields with single entrances because police can easily block them off.

Since hunting with dogs was banned in England and Wales in 2005, Mr Gardner has seen an increase in people driving across his farm.

“Some of it is joy-riding, but about 70% is more likely to be people hare coursing or chasing any living creature,” he added.

Manor Farm is not in an environmental stewardship scheme, but Mr Gardner tries his best to control his margins in the trenches.

“You can be a bit lazy about letting them grow weeds, but the money it costs to reseed is nothing compared to what the area would cost us in terms of fencing,” he said.

“The farm is surrounded by a lot of public walkways and there are walkers and horse riders. We haven’t had any complaints about people falling into the trenches, so provided they can see them, there should be no problem.”

Manor Farm intends to use the plough on a contract basis to complete work on other farms.

“The farm was subject to criminal activity so often that it qualified as a ‘Gold Victim’ of crime on our system, but sadly there are no prizes for this ‘gold’ medal.

“Since the plough has been used, it has been superb. The problem is that if they cannot get on here they will go to other farms.”

Mark Wilson, a senior agent at NFU Mutual, based in Dummer, near Basingstoke, said: “NFU Mutual is very keen to promote this type of innovation.

“Such practical solutions should encourage a further uptake of effective farm security. This example is clearly proving successful with big reductions in trespass seen.”

Report a crime or check crimes in your area on our Crime Register.