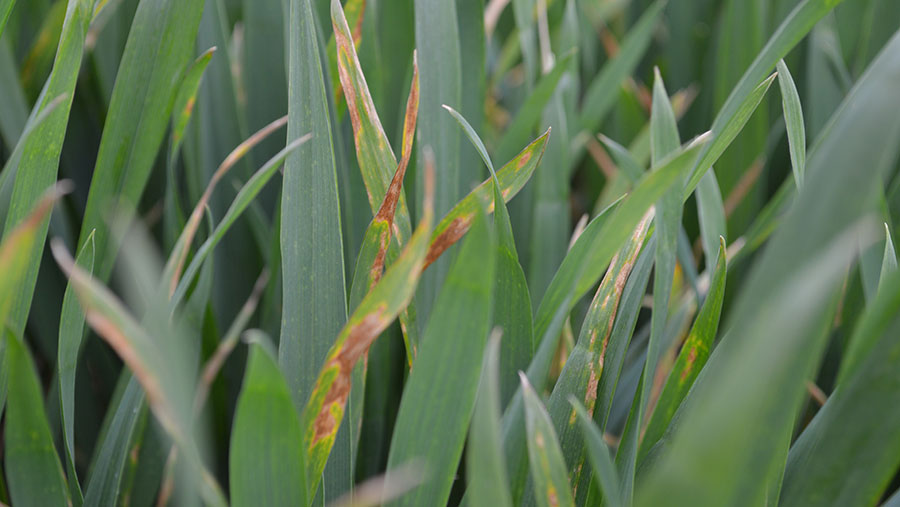 Wheat growers should be spending £100/ha-plus on fungicides to get the highest profit margin possible, even in a moderate disease year like the current one.

Many growers may have saved money in the early spring due to cool dry weather, but wetter warmer conditions from mid-May onwards have exacerbated the disease threat from septoria and rusts.

“There are not many sites and not many varieties where growers should be spending much under £100/ha,” he told Farmers Weekly at the Cereals 2017 site at Boothby Graffoe in Lincolnshire.

He has looked at low, moderate and high-risk wheat varieties based on their disease resistance levels, and said all these give the highest margin over fungicide costs at the £100/ha level and above.

The low-risk variety Siskin gave its best response at a spend of about £100/ha, the moderate-risk Santiago at £120/ha and the high-risk and very disease susceptible Cordiale at more than £130/ha.

“Even in a moderate disease season it would be worth spending £100/ha-plus on these varieties,” he added.

Despite the relatively dry early spring, there was plenty of septoria and yellow rust in the base of wheat crops, and then the move to warm and wet weather caused a pickup in the level of these diseases, and also brown rust.

With many wheat crops having already received their T3 ear sprays, Mr Clark added there could still be a threat from late attacks of rust.

Rust-susceptible varieties, such as Reflection and Zulu, which may have seen an ear spray at the start of June could need a further spray to keep out rust.

“For these varieties which have had a spray at the start of June of a half rate of the azole tebuconazole, this might not be enough,” he said.

He suggested growers might have to go in with a further azole fungicide soon to control any late yellow or brown rust attacks.