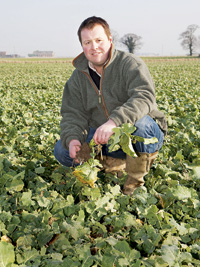 Oilseed rape crops are emerging from the winter with larger differences in canopy size than previous years, making it critical to get nitrogen and growth regulator inputs right this spring to maximise yields.

Pete Berry, principal consultant at ADAS, says the drilling date and how crops survived the early harsh winter have been crucial factors in determining their current appearance.

“Crops that were planted early, around mid-August, romped away and produced very large areas, compared with those planted around September,” Dr Berry explains. “Additionally, some regions had snow cover, which insulated crops and stopped them desiccating in the wind.”

It is also possible that some varieties are more prone to losing their leaf area in cold conditions, he says. To maximise yields, the ultimate aim for growers is to achieve a green area index (GAI) of 3.5 at mid-flowering.

“Seed number is determined by the amount of photosynthesis carried out during two to three weeks after mid-flowering. If your canopy is small then it will not intercept the sunlight, but if it is too big then the light will just reflect back up.”

Lincolnshire grower Ben Atkinson is used to seeing such large differences in canopy size in early spring and is tailoring his nitrogen and growth regulator inputs accordingly.

Oilseed rape accounts for 1100ha of his total cropping area of 3000ha, and this season he is growing four different varieties to spread his risk and harvesting load.

He is growing hybrid varieties Excalibur and DK Expower, both early maturing types, with good autumn vigour, standing ability and disease control, which can be harvested first. For later harvesting, he has planted conventional varieties, DK Cabernet and Sesame, which have stiff straw and good disease resistance.

Mr Atkinson starts by measuring the GAI of his crops around late February or early March. “With the difficult establishment conditions of last autumn, differences in GAI are quite pronounced with drilling date, land type, and varietal differences all showing,” he says. “However, hybrids generally have the greater GAI due to their autumn vigour.”

With the help of his agronomist, Jon Sanderson, of Frontier Agriculture, the GAI scores are used to form the basis of his nitrogen and growth regulator strategy.

Deep core nitrogen samples will be taken to assess residual nitrogen in the soils, and the results will be taken into account when calculating nitrogen rates, Mr Sanderson says. A treatment of nitrogen and sulphur, either liquid or granular, will be the basis of the first application on crops around mid-February, he adds.

Crops will also be assessed for a possible application of Galera (clopyralid + picloram) to control a range of broad-leaved weeds, in particular, thistles, cleavers and mayweed. Checks will start mid-February, especially on forward crops (GAI of more than 1.0), and the cut-off point will be when flower buds are visible.

“Not all crops received two phoma sprays in the autumn, so if there is active phoma in the crop around now, we would be looking to add a triazole, such as Proline (prothioconazole) in the Galera tank mix,” Mr Sanderson says.

Once there is good active growth in the spring, Mr Atkinson will assess his crops for PGR requirements. However, it is unlikely that backward crops (GAI of less than 0.5 in mid-February) will need any growth regulation through the use of PGR fungicides, he says.

Thin or later-developing varieties may require an early dose of nitrogen to stimulate the GAI and rebuild canopies, adds Mr Sanderson.

Sunorg Pro (metconazole)/Corinth (prothioconazole + tebuconazole), as well as boron, will likely be applied – but only when crops have some good active growth in the spring. Spring tissue analysis will be carried out to assess any requirements of other trace elements, such as magnesium, to include in tank mixes.

Pollen beetle will be monitored carefully and insecticides will be used where required, he adds.

If light leaf spot appears, prothioconazole-based chemistry, such as Corinth or Prosaro (prothioconazole + tebuconazole), will be the products of choice. Then, a two-spray fungicide programme for sclerotinia will be applied, based around boscalid.

David Leaper, technical manager at Monsanto, urges all growers to monitor for light leaf spot, and disease forecasts can be checked at www.rothamsted.bbsrc.ac.uk

On Mr Atkinson’s farm, late applications of foliar nitrogen may be carried out to boost seed fill on crops with greater yield potential. Mr Sanderson recommends 30kg/ha for each 0.5t above 3.5t/ha on these higher yield potential sites.

Likewise, he suggests 40kg/ha for foliar nitrogen at the end of flowering for higher-yielding varieties, but warns this can slightly reduce oil content. Growers who are unsure should refer to HGCA information on foliar nitrogen rates.

A two-spray strategy will be adopted on farm to tackle sclerotinia, he adds, and timings will be three weeks apart – early flowering, followed by mid-flowering,

Sclerotinia spraying programmes should be tailored to individual varieties, says Mr Leaper. Sprays should be considered as routine at early mid-flowering, while a second spray should be applied if the flowering period is protracted, he says.

“The start of flowering is going to be significantly different in Excalibur, compared with Cabernet and Sesame, so treat those almost as different crops.”

Mr Leaper says despite the significant improvements in disease resistance, all varieties should still be monitored in the spring for disease, and he believes a two-spray fungicide programme is still the best option. “Improved genetics offer greater yield consistency on farm, but there is still the need to monitor and spray.”

Mr Atkinson, who uses a “robust but sensible” spraying programme, which helps him achieve yields approaching 5t/ha, agrees that slashing crop inputs this spring to save money could be costly now.

“You have put all your inputs in the autumn and to lose it now at the very end would be very expensive,” he says.

“With crop yields moving towards 5t/ha and the price of commodities where they are, everyone should try to get the best return they can.”

PGR strategy a must for canopies

A thick crop canopy can give excellent weed control in oilseed rape, but it could also increase the risk of disease and lodging, without the right PGR strategy.

Trials have shown that lodging can result in a yield penalty of between 13-50%, equivalent to £110/ha-£420/ha, according to Jon Williams of BASF.

“Seed yield is determined by photosynthesis, so if you have got an overlarge canopy, the light will be hitting your flowers and reflecting, which you don’t want,” he says.

Trials by ADAS show that up to 60% of light can be reflected from the flower layer in a large canopy of oilseed rape. “The lower pods will start to abort because they won’t be getting the energy or seed fill.”

A lodged crop lying flat to the ground also has the effect of creating a microclimate, which is more susceptible to disease, he adds.

“It’s going to be humid and sclerotinia is going to develop in a larger crop and hit your yield.”

The BASF Mobile GAI Tool is being released in association with Farmers Weekly in mid-February. The download fee is £1.49 from the Apple iStore.

The app has been designed to provide the same functionality as the BASF GAI tool, available on www.totaloilseedcare.co.uk for several seasons.