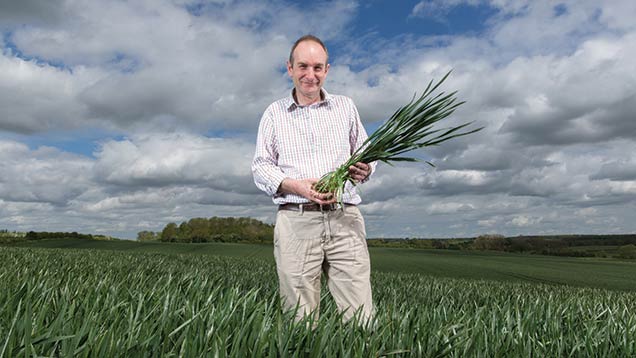 Gordon Edwards has increased his area of breadmaking wheats to match the rapid growth of the UK’s leading bakery brand, Warburtons.

He started producing milling wheat for the breadmaker more than 10 years ago and has watch the group grow from a regional to national baker.

Now all the wheat he produces on the 720ha Northamptonshire farm where he is manager heads for Warburtons, as he benefits from rising demand and premiums.

See also: What are the milling wheat prospects for harvest 2015?

He is one of group of growers organised by grain co-operative Openfield to supply the Bolton-based baker with grain that meets its quality standards.

“It is the best of both worlds. As a business, we are committed to producing quality grain, which is exactly what Warburtons needs. It also helps that the farm workforce knows where our wheat is going and why the end result is important,” he says.

The view that milling wheats bring additional on-farm risk is not entirely shared by Mr Edwards, who has experienced difficult growing seasons and the introduction of new varieties while he has been growing for Warburtons, with few penalties.

“We have largely managed to achieve the specification and earn a premium, so it hasn’t exposed the business at all,” he adds.

Of course, grain prices and premiums have fluctuated in that time, but fortunately Lowick Manor Farms, just north of Kettering, has been somewhat sheltered.

“Interestingly, over the past four years the farm’s average wheat price has only varied by £10/t. So we haven’t been subjected to huge price volatility, thanks to the terms of the contract and some good fortune,” he says.

The Openfield/Warburtons contract is based on a £20 minimum/£40 maximum premium, in recognition that milling wheats cost more to grow than feed wheats.

It also stipulates a slightly lower grain protein content of 12.5%, compared with a traditional millers’ standard of 13%, and a Hagberg of 225, but prohibits the use of late foliar nitrogen.

Initially, the variety Hereward was grown as it was Warburtons’ preferred choice. It always met the grade in terms of breadmaking quality, but became outclassed on yield as newer varieties were introduced.

“As a result, there was a £5/t premium over the Group 1 price paid for Hereward. That made it worth doing,” he says.

However, after an agronomic review and in consultation with Openfield, he was persuaded to switch to Cordiale and Crusoe, which suited his needs for early- and later-maturing varieties and were also approved by the end user.

“We have since moved on again, replacing the Cordiale this year with Skyfall. This newer type of milling variety, which offers both yield and quality, is a real step forward,” he says.

Drilling starts in late September, with bad blackgrass fields being delayed until late October. Multiple applications of nitrogen are made, using variable rates based on satellite imagery, so that the nutrient is supplied according to crop need.

Apart from meeting the nitrogen requirements, applying sulphur early on and using certified seed from Openfield, Mr Edwards says there are no additional prerequisites, so breadmaking wheat doesn’t create much extra work.

“We have a green composting site on the farm, so soils have benefited from their application every year,” reveals Mr Edwards.

“It has lifted our soil organic matter content, made soils easier to work and helped to provide nutrients, including nitrogen,” he adds.