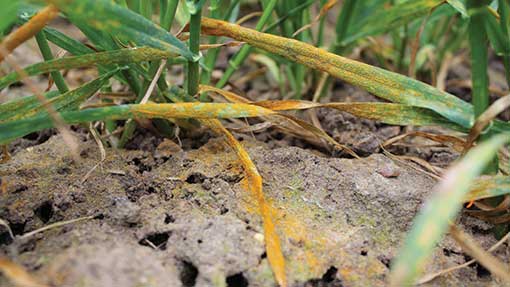 Warrior race yellow rust is enemy number one of wheat crops in the east, and is now becoming more of a problem in the west and south-west. Jonathan Blake, principal research scientist at ADAS, looks at the growing threat

Just why are we seeing high levels of yellow rust this year? Three factors have combined to create this firestorm: the propensity of susceptible varieties, a new more virulent and aggressive isolate of yellow rust, and one of the mildest winters and springs on record.

The warm October followed by a very mild winter gave yellow rust a chance to spread into crops in the autumn and early spring. The south of the UK usually expects 37 air frosts during the winter but in 2013-14 it only got 17, whilst the north on average gets 65 and received just 26.

A lack of frosts meant that lower infected leaves were not severed from the plant (a process that removes infection and prevents yellow rust spread), and permitted recycling of the disease.

See also: Yellow rust on course for worst ever season

Mild damp conditions during canopy expansion allowed re-infection to occur, and many early fungicides were applied in reaction to the yellow rust being seen.

Re-infection occurred between T1 and T2 in some cases on more susceptible varieties. This season was particularly testing due to slow leaf emergence. The early emergence of leaf 3 has been followed by a slow emergence of leaf 2 and the flag leaf.

Almost exactly the same pattern occurred in 2012, and it is due to the influence of day length on development. As crops move through the growing season their development is initially governed in the winter by vernalisation.

Then in early spring temperature is key, and as the spring progresses photoperiod (or day length) takes over. In a season such as this, temperature drives early development and leaf 3 pops out early. From there on, as day length takes hold, leaf emergence slows down to bring the crop back on track and ensure flowering does not occur too early.

More than 80% of the yellow rust in the UK is understood to be the Warrior race, and the indications are that it is quicker cycling, produces more spores and may possibly even be tolerant of higher temperatures.

Work by Mogens Hovmøller at the Global Rust Reference Center in Denmark has shown it may produce twice as many spores as previous races of yellow rust.

Yellow rust will be the focus of wheat fungicide demonstrations at the ADAS Boxworth open day on 3 June, near Cambridge. This free event will run from 12-4pm, is open to all, and will feature a number of other demonstrations. For more information call ADAS Boxworth on 01954 267666 or visit aplus.adas.co.uk

Also, whereas previously under ideal conditions, it would have taken 14 days for a UK yellow rust isolate to complete a cycle, this race may take 12.

The work has still to be done to show if, like American yellow rust isolates, the Warrior race is high temperature tolerant. If it is, yellow rust control will not just be an early spring problem and could also plague wheat crops during grain filling.

Controlling yellow rust is most easily achieved by growing varieties that are resistant, although this decision is not always straightforward. There is a clear yield penalty for disease resistance in wheat, with the highest-yielding varieties usually being the most susceptible to disease.

Virulence can also change with time, which means that varieties previously understood to be resistant can become susceptible. Oakley has been the worst offender. For some farmers, yellow fields have been an uncomfortable reminder of where they put their Oakley.

Unusually, the west and south have not escaped either. The lower density of wheat cropping in these areas, and robust fungicide strategies to keep septoria at bay, usually keeps yellow rust in check.

This year it is being found in a wide number of crops such as Kielder, Solstice, Santiago, and a host of other varieties have been found with it. Late-sown varieties have often appeared to be worst hit.

All fungicides work most effectively preventing rather than curing infection. With a fast cycling pathogen like yellow rust, fungicide timing is almost as important as product choice.

Early control, ideally just prior to the infection challenge, keeps the disease out of the crop, but once established fungicides can only slow the epidemic. Of the wide range of modes of action with efficacy on yellow rust (azoles, SDHs and strobilurins), the azoles are the most effective.

The SDHI’s and strobilurins come a close second and can effectively add to the control achieved by the azole.

Can we break the yield record at Boxworth?

In 2013 the biggest failing of entrants in the Yield Enhancement Network – or YEN – cereal yield competition was missing out on potential photosynthesis in late July and August.

Even the record crop of 13.4t/ha achieved less than two thirds of its potential.

This year, ADAS is testing some “extreme husbandry” and some “wacky” ideas, just to see how much it can enhance late grain filling. We sowed Kielder as a first wheat, using a low plant population, and threw “the kitchen sink” at it this spring.

Now, in addition to extra late nitrogen and a prolonged fungicide programme, plans are being laid to irrigate, irradiate and refrigerate some of the plots!

We think those last few weeks of growth are crucial in making or breaking wheat yields, so we are testing whether extra water, extra light or extra coolness (so less respiration) might enhance late yields significantly.

The hope is we can find a combination of treatments that breaks the world record yield of 15.7t/ha, but more importantly we are seeking pointers for new ideas that might help to enhance wheat yields.