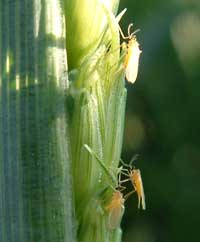 Cereal growers on the lookout for orange wheat blossom midge this year are being warned about its close relation, lemon blossom midge (LBM).

The Arable Group sites in Hampshire and Gloucestershire were infected by LBM last summer, confirms the organisation’s Jane Evans. “In Hampshire, we found significant numbers. It’s possible that the warmer wetter summers are favouring the pest, so growers should be aware of it.”

An obvious colour difference is just one way of distinguishing between the two midge types, she adds.

“It’s earlier than orange wheat blossom midge, emerging as the flag leaf sheath begins to extend,” she says. “It also lays its eggs in larger batches of 5-20 per floret, so the larvae form large wriggling clusters.” 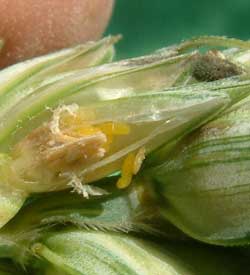 Minor LBM infestations have little impact on yield, as its habit of laying all its eggs in one place means that fewer grain sites are affected, continues Ms Evans.

“The difficulty with assessing the LBM threat is that they are not attracted to the pheromone traps used for the orange midge, and due to their sporadic nature the threshold for control, one per ear, hasn’t been tried and tested.”

“But we’re not advocating control measures for LBM yet,” he stresses. “At this stage, it seems to be a regional pest which does less damage than its relation. The important advice for this year is to keep a look out for it – don’t forget that OWBM used to be a sporadic problem.”

Wheat varieties with orange wheat blossom midge resistance may be susceptible to LBM, as high larvae numbers have been found on them, he adds.

“This is important because growers who select varieties with OWBM resistance could find that LBM becomes more of an issue.”

Fortunately, there appear to be varietal differences in LBM susceptibility which could be exploited, reports Mr Freer.

“Ear structure might help – a tight floret makes it more difficult for the midge to lay its eggs. And early or late maturity means that the variety may not be at the vulnerable stage when the midges emerge.”

TAG will be starting its OWBM monitoring slightly earlier this year, in order to help with the detection of LBM, confirms Ms Evans.

“It is assumed that, as with orange wheat blossom midge, a period of warm wet weather in May, with soil temperatures above 13C, will activate pupation.

“Female flight then occurs when temperatures are above 15C, so this is when you should monitor for midge activity,” she advises. “And temperatures have to remain warm for the eggs to hatch.”