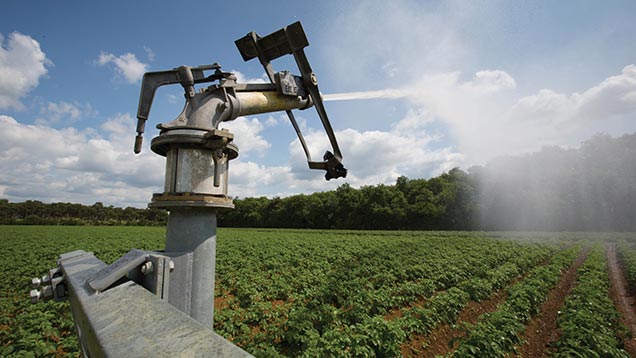 Potato growers could be forced to scale back production by more than 30% if the government pushes through proposals to limit water abstraction for irrigation, says a major study.

Environment Agency plans to restrict licences so growers can abstract only the average annual amount of water used during 2003-2009 fail to take into account how farmers use water, according to the study by Cranfield University.

The study examines licensing issues in the Cam and Ely Ouse catchment in East Anglia, where irrigation for potato and vegetable production is worth £91m annually. Restricting abstraction to average needs would reduce both yields and quality, says the study.

“Quality premium losses would be additional and substantive,” it warns. “If the farmer chose instead to reduce the area of potatoes grown in response to the new limits, the reductions would be  about 22% and 39%, respectively, with negative effects every year.”

Future abstraction licensing should recognise the importance and value of groundwater for supporting high-value horticultural production, says the report. It should also recognise the additional benefits generated for the rural economy and local employment.

The study, commissioned by the NFU, comes at a time when the Environment Agency is due to decide how to make abstraction licences which are time-limited compliant with the requirements of European Union environmental rules.

The Water Framework Directive says abstraction must not cause environmental deterioration. Time-limited abstraction licences are typically renewed for a decade or more, but some 200 licences have just been renewed for only three years while the agency considers the WFD requirements.

One option is to base annual abstraction limits on the average amount of water used during 2003-2009. But growers argue this would be unfair because the period encompasses some particularly wet summers when less water was abstracted than had it been drier.

NFU national water resources specialist Paul Hammett said: “This report reinforces our view that alternative and smarter solutions must be found to the simplistic solution of clawing back those licensed volumes of water that farmers currently hold in reserve for spells of dry weather.”

The Cranfield study says the proposals will have a disproportionate effect on growers because time-limited licences account for more than 90% of agricultural water used, but only one-third of water company use – and water companies can spread their requirements across different licences.

An Environment Agency spokesman said: “We are currently working with local farmers and the NFU to see how we can meet the environmental duties of the Water Framework Directive, while minimising the effect on farmers.

“While decisions on many of these licences will be required by 2018, we plan to communicate our approach once the joint work with farmers is complete. This will give local farmers time to adjust to any changes to the licences if necessary.”

Fears for future of irrigated crops

Eastern region growers fear water shortages will leave them unable to grow crops – despite taking steps to protect their businesses from drought.

Irrigated crops account for more than half the farmed area along the Lark catchment in Suffolk and the Wissey catchment in Norfolk. Although most growers here abstract less than their entitled volume of water in normal years, many require much more in drier years.

Farmers who irrigate crops in these catchments use two-thirds of the water allocated to them by abstraction licences during an average year, according to an NFU survey. But two-thirds of Lark farmers and half of the Wissey farmers use 100% of available water in dry years.

Surface water and/or groundwater were used relatively equally. Three-quarters of farmers in the Wissey sub-catchment had built a reservoir to store surplus water, but less than half of Lark abstractors had invested in storage. Some farmers had two, three or even four reservoirs.

Even so, growers still lack confidence about securing adequate long-term access to water for food production – often due to a combination of greater drought risk and government proposals to reform the abstraction licensing system.

Three-quarters of farmers in both sub-catchments said they were very or quite confident about water availability for 2015. But only one-third of farmers said they felt similarly confident for the outlook in five years and only one-quarter of farmers were confident over a 10-year period.

Perhaps surprisingly, four-fifths of all reservoirs are more than 10 years old, indicating that water security is not a new issue for growers. Reasons for building reservoirs varied, but the main drivers focused on ensuring access to water during periods of shortage.