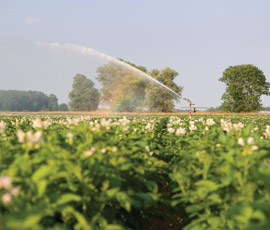 A lack of available water could force growers to cut potato areas next spring.

Groundwater levels at the end of October were in a worse state than at the same period in 1975 in many places in England, he said.

A dry autumn had only exacerbated problems. “Current soil moisture deficits in the Midlands are around 100mm deficit, and only slightly better in East Anglia.

“At the same time last year, deficits were almost back to field capacity, which is what you would expect by the end of the year. We’re in a very different position to previous years.”

Average rainfall for the next three months would take deficits back up to field capacity. “Anything less would be a deficit going into planting.

“The problem is with groundwater and river water licences you have to get to field capacity and beyond before you can start abstracting. That is why so many licenses have a restriction on them currently because they are below the hands-off flow level.

“Many could easily not pump a day between now and March. It is why a winter drought is so much worse than a summer one.”

A cold dry winter, with low rainfall and frozen ground, would make the situation worse, he added, because rainfall on frozen ground didn’t infiltrate and recharge the aquifers.

Around 50-60% of irrigated potatoes are in a region the Environment Agency is classifying as high risk for water.

“Think about what you would do in a drought. We do seem to get away with it – just. But this is one we shouldn’t take out of our sight. Could you go into next spring if you haven’t pumped? You have to have a plan.”

Ross Haddow, farm and estate manager at Stody Estates in Norfolk, said planting of potatoes and other vegetables on the estate would be cut back, if not enough water was available. Abstraction had not been possible this autumn because flow rates in the river were too low.

“Water levels are lower than many years and we are concerned about filling our winter storage reservoir and abstracting from groundwater next year.

“We will not plant crops unless we are fairly sure water is or will be available, as the risks of poor yield are not worth it. The vegetable sector is not very profitable; the risk/reward balance is already inadequate. Planting crops to supply to supermarkets without adequate water stretches that risk.

“It is possible that 2012 will be a wet summer with low irrigation requirement, but if it were to be dry, crop yield and quality could be compromised because of inadequate water supply.

“It really is the horns of a dilemma. Not planting would also have massive consequences – reduced income, reduced labour/job losses, reduced purchases – so impacting someone else.”

Potentially regulators could look at allowing growers to abstract for reduced periods or at reduced amounts a day from lower winter flows to alleviate any food production concerns, he suggested. “This is also the time to consider how winter storage can be funded, better facilitated through planning, and whether winter abstraction licences can be converted to abstraction from high flows whenever they occur.”