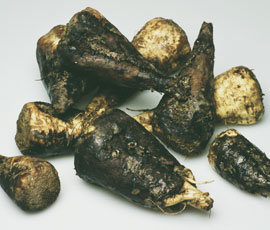 This autumn’s mild weather is being blamed for the rise in violet root rot seen in sugar beet crops.

An increasing problem throughout Europe, it is caused by the soil fungus rhizoctonia crocorum that can develop throughout the field, says the BBRO in its latest newsletter.

It spreads from plant to plant through mycelium that creeps on the soil surface. It can survive for at least four years, mainly as sclerotia, but also as mycelial strands.

The fungus becomes active and affects roots when soil temperatures are above 13C, usually mid to late season, and BBRO believes that the warm autumn has exacerbated the situation this year. Other favourable conditions are high moisture, poor drainage and alkaline soils.

Symptoms include a dark purple rot on the tap root surface and it often, though not always, starts near the tip of the tap root and spreads upwards, and may eventually cover most of the root surface.

However, normally the rot does not penetrate deep into the tap root tissue, though infection by secondary rots such as fusarium, affecting the entire root, may follow. Typically, the disease occurs in patches and is aggravated by short rotations of root crops, says BBRO.

Growers seeing the problem should consider reducing the frequency of host crops (see table below) in the rotation as well as having no beet for three years, or ideally five in rotation with cereals.