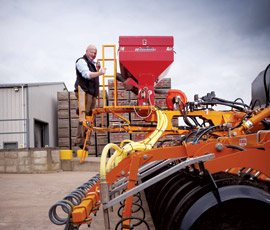 Colin McGregor is looking forward to the welcome task of managing forward crops this season after a year of struggling with backward ones in the Scottish Borders.

Harvest and drilling progress is now around three to four weeks ahead of last summer, as good weather has allowed him to catch up from a slow start to the season.

Once the first winter barley was cut on 8 August, progress gathered pace and combining should be completed by the end of this week, apart from spring beans, he says.

Mr McGregor says this summer was all about catching up and getting crops in the ground early to prepare for a hopefully better 2014.

“We are set up well this year as the weather is playing ball. All oilseed rape is drilled and 23% of the wheat will be in the ground by the end of this week,” he says.

He has drilled 582ha of rapeseed, and after starting drilling winter wheat on 25 August, should have sown around 383ha by the end of this week.

“Soil temperatures are warm and crops are emerging in five to six days. We are making good progress and we are around three to four weeks ahead of where we were last year,” he adds.

For the harvest so far, all yields are below the long-term farm average, but above harvest 2012 due to forced late drilling and poor establishment followed by a late and cold spring.

“This week we should finish the last oilseed rape, winter wheat and spring wheat which should complete the harvest, apart from spring beans,” he says.

Winter barley yielded 6.7-8.3t/ha and despite the late start, good progress was made as soon as the combines started rolling.

Winter wheat showed yields of 6.8-11.1t/ha with the wide variation due to drilling dates with the later sown ones yielding poorly and the early ones producing good yields.

Oilseed rape yields came in at a relatively tight range of 3.5-4.6t/ha for this season, but as 55% of the planted area was ripped up, only the better crops came to harvest.

Spring barley flattered to deceive and was hit by the dry spell in the early summer and only yielded some 6.0-7.5t/ha. 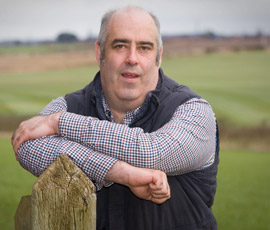 Graham McIntyre pays tribute to his local machinery dealer as swift action minimised his combine’s downtime to just three hour after a major breakdown on his Nottinghamshire farm.

Mr McIntyre reckons people are often too quick to moan about bad service, but on this occasion he couldn’t thank his dealer enough.

As his New Holland CR9080 combine ground to a halt last Friday (30 August) it looked like there would be a major delay to harvest.

With a technician from local dealer Platts Harris, Tuxford, arriving to diagnose the problem, it was predicted it would take days, rather than hours to fix.

“The firm had a CR9090 demonstration machine on the farm and we were up and running within three hours, so we couldn’t ask for more,” says Mr McIntyre.

Despite the demonstration machine being destined for another customer, its diversion allowed the farm to continue combining wheat until the repairs were finished on Sunday (1 September).

As a result, Mr McIntyre now has just 50ha of Mulika spring wheat left to cut on his heaviest land and says it will be complete by the weekend, bringing the curtain down on harvest 2013.

“With oilseed rape all drilled this week too, our priority will be turning around the heavier ground for drilling winter barley,” he adds.

Looking back at the Broomhill Grange harvest, wheat yields and quality have been pleasing.

Variety Santiago has performed well as both a first and second wheat and Mr McIntyre reports yields of 9-10/ha for first wheats and 8.5-9t/ha for second wheats.

The farm’s 120ha of high erucic acid rapeseed (HEAR) has also performed admirably, achieving the farm average in what has been a difficult year for the crop.

“Overall, we can’t complain, we just need some rain now as things have really dried up,” Mr McIntyre says.

“We have had to irrigate the grass and stubble turnips we have for our sheep, and the sugar beet has gone flat,” he adds.

Fighting back against the drought