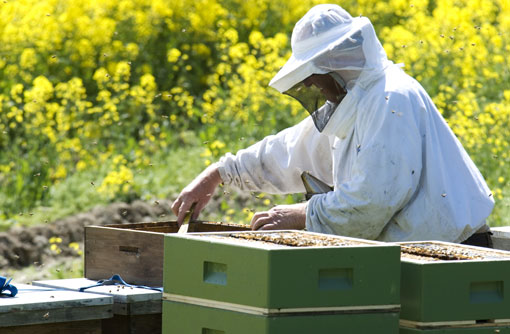 They’ve had a key role in early season oilseed rape pest control for more than a decade, but growers now face a future without neonicotinoid seed treatments.

Some growers are even considering abandoning growing the crop as they consider the implications on future cropping plans.

Back in April, the EU Commission pushed through a two-year EU-wide ban on three neonicotinoid actives for flowering crops, covering oilseed rape, maize and sunflowers.

The two-year ban is to allow time for research to gather more data to determine whether the use of neonicotinoid seed treatments has an effect on pollinators of flowering crops.

Due to come into effect on 1 December, the ban has been described as a severe blow to farmers, with estimates of up to 30% yield penalty in severe cases.

James Wallace, Dalton Seeds director and a board member of the Agricultural Industries Confederation, believes it will ultimately result in a reduction in the area of oilseed rape being grown in the UK, as well as narrowing the profit margins.

“People say the yield reduction could be up to 5%, but within that 5% there are those who could lose the whole crop.”

“Turnip yellows virus can cause anywhere between 7.5-30% yield reduction and cabbage stem flea beetle can have a 1-2% effect, however within that it can cause total wipe-outs in some crops.”

Independent agronomist Sean Sparling believes it is unfortunate growers are having to revert back to “much older” chemistry, but does not believe there will be a huge difference in the amount of sprays being applied.

“In many cases where the seed treatments have not been used, there are on average only one or two pyrethroids being used in the autumn.

“But even where the neonicotinoids are used people, will still often use an additional insecticide,” he explains.

Mr Sparling, however, does suggest growers will have to pay more attention to their crops in the early stages as they do not have the safety net of the neonicotinoid seed treatment.

“Poor control of aphids could lead to transmission of turnip yellows virus which can have a huge effect on yields and is one of the most worrying things in the industry at the moment.”

“If you can’t get your pyrethroid on at the right time because of the weather, which is highly likely, you will lose plants and a crop.”

“I know that some of these pyrethroids have minimal effect on one of the key aphids [peach potato aphid].”

Poor control of aphids could lead to direct feeding damage on emerging seedlings and transmission of turnip yellows virus.

The other key pest is cabbage stem flea beetle and Mr Cade suggests growers could see higher populations, forcing them to increase the amount of spraying, resulting in a much less profitable crop.

However, not all growers believe the impact will be that severe. Peter Lundgren of White Home Farm in Lincolnshire believes the worries surrounding the loss of the neonicotinoids are being exaggerated.

“It’s not surprising there are such concerns when the industry publishes such inflated figures for the potential loss, such as £230/ha, and when the NFU claims the loss of neonicotinoids will lead to a situation where many growers will be unable to grow OSR.”

Mr Lundgren believes farmers will not lose out from the current ban on neonicotinoids. “Purely on the cost basis, I don’t think farmers are going to lose out. I’ve had a long chat with my agronomist on this matter and our take is that we can cope without them and at a lower cost than the £15-20 I’m currently paying for the seed treatment.”

Mr Cade on the other hand believes that oilseed rape will no longer be the break crop it once was and with margins becoming tighter, the possibility of dropping the crops in high-risk areas may be a possibility.

He also has wider concerns with agchem companies being more unwilling to invest in new actives for EU market in the future when “knee-jerk” reactions can create such a response.

“Will they be putting these products in to try and get approval if they are likely to get cancelled.”

He points to the way the neonicotinoid ban on flowering crops came about despite DEFRA, the chief scientist and researchers arguing that there is no science linking the use of these pesticides with the decline in bee numbers.

The EU two-year ban at a glance

What products does the ban cover?

Three neonicotinoid actives are covered by the ban: clothianidin, thiamethoxam and imidacloprid. They are primarily used in oilseed rape and are contained in the following products:

What are they used for?

What crops are affected by the ban?

When does the ban start?

It kicks in on 1 December 2013, which means the seed treatments will still be available for drilling this autumn, but not for next spring.