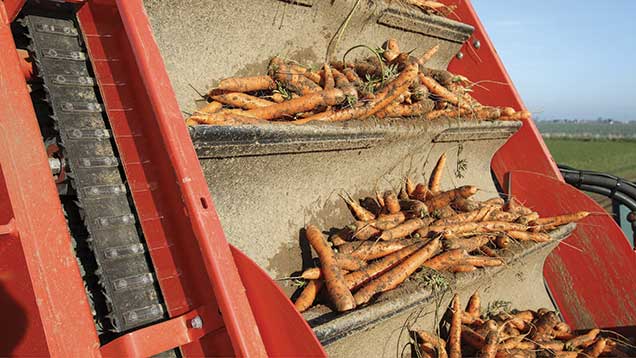 Carrots are one of the UK’s most important root vegetables, with around 700,000t produced annually and year-round availability of home-grown produce in many retailers.

But, like other sectors, production is increasingly concentrated among fewer, larger-scale growers, who are better able to spread the cost of growing a crop which requires significant specialist kit.

Growing costs can vary from around £4,500/ha for maincrop carrots (harvested October to January), to £9,000/ha for “strawed crops” (harvested January to May and covered with straw over winter), says Howard Hinds from Root Crop Consultancy.

However Nottinghamshire, Yorkshire and Scotland have become important production areas over recent years as growers seek land not used for the crop before and use climatic variation to help balance supply.

Seed-bed preparation for carrots has a lot in common with potatoes and a similar need for irrigation means the two are often grown in the same rotation.

A de-stoned or de-cloded tilth is required with a loose depth of soil which, according to the British Carrot Association, is usually 50-75mm deeper than the required length of the carrot – a depth of 250-300mm is typically needed.

Drilling with a suitable precision drill is essential to ensure crop uniformity, the BCA says.

Cover crops, such as barley, are widely used to prevent wind erosion from exposed soils after drilling, continues Mr Hinds. “Carrots are typically only sown 15mm deep so there’s very little soil covering the seed. Barley is sown at the same time as carrots to cover ground quickly and reduce the risk of wind blow.”

However, it is vital any cover crop is sprayed-off before it starts competing with carrots, he says. “This is usually when the barley is at the six-leaf stage and carrots are at one true leaf.”

Most growers apply a nematicide (Vydate – oxamyl) at drilling to control free-living nematodes, although biological control agents based on garlic extract or Bacillus firmus bacteria have future potential, he notes.

Reducing early crop competition with a robust post-emergence herbicide programme for a broad spectrum of weeds is key, alongside an insecticide for carrot fly and aphids.

Maincrop fungicide programmes typically run from mid-July to September, with alternaria and sclerotinia being the main disease targets. Insecticides are often included for both aphid and carrot fly control and spray intervals are typically around 14 days, says Mr Hinds.

There are no issues with fungicide resistance, but spray coverage can be a challenge when crops fall over and some growers clip sides of beds to open air flow up at this stage, he notes.

Perhaps the biggest threat to UK carrot production is the soil-borne disease cavity spot, a problem caused by pythium species and exacerbated by close rotations in a similar way to many cereal and oilseed diseases.

“We are seeing more cavity spot problems, especially where carrots have been grown in the rotation before,” says Mr Hinds, who points out the main variety grown in the UK, Nairobi, accounts for around 80% of production and is quite susceptible to cavity spot.

“Early-lifted carrot crops harvested before infection begins need at least a six to seven-year break and maincrop carrots need even longer, but everyone is running out of fresh ground.”

Current management relies on partially resistant varieties and just one chemical option based on metalaxyl-M, he says. “That’s typically applied soon after emergence and often has to protect crops through to the following year.”

On average, 10% of production is lost to cavity spot each year, adds Tim Lacey from Bayer CropScience. He believes integrated crop management with chemical control alongside cultural methods such as rotation, varietal resistance and new biological control agents is key to future control of cavity spot and other carrot problems, such as sclerotinia.

The company is developing a number of biological control products which can perform as well as standard chemistry as part of integrated programmes, he says.

Serenade ASO, for example, is based on a bacteria strain called Bacillus subtilis QST 713, which is incorporated pre-drilling and colonises the developing carrot root, out-competing pathogens, providing direct anti-fungal and anti-bacterial action and also triggering the plant’s natural defences.

Four UK trials and two Dutch trials found cavity spot control was comparable to or better than metalaxyl-M, while the product also performed equally well when substituted for part of a chemical programme against sclerotinia, he says.

The lack of available herbicides for specialist crops such as carrots is another major challenge and one exacerbated by EU reviews of active ingredients, says Yorkshire-based grower Guy Poskitt, whose business produces over 50,000t of carrots a year from farms across the UK.

Volunteer potatoes are a particular issue and there is only limited potential for cultural control, he notes.

Mr Hinds says one of the biggest threats is the potential loss of linuron from 2017. “It’s one of the main herbicides for carrot growers and there’s not really anything else in the armoury for volunteer potato control.”

Fewer herbicide options may force growers to rely on more cultural control methods such as hoeing, band and spot spraying, he says.

Mr Poskitt says another big challenge is balancing production against demand, especially when carrot yields can vary by 20-25%. Maincrop Nairobi, which accounts for 60-70% of his carrot area typically yields 40-45t/acre, but drought or early frosts can have a big impact.

Some 90% of his carrots are grown on irrigated land, which brings the added challenge of dealing with tightening abstraction licencing, he notes.

“Carrot growers take on a lot of risk for quite limited reward.”

Nutrition (example rates all depend on individual soil index):

Cavity spot, sclerotinia, alternaria, carrot root fly and aphids. Volunteer potatoes and mayweed are two of the most difficult weeds to control.