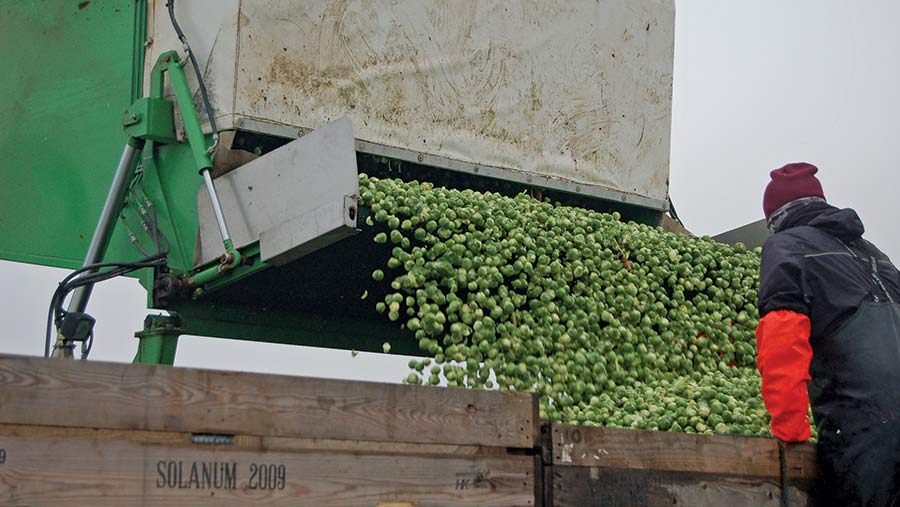 Loved and loathed in equal measure, Brussels sprouts are the epitome of British taste. But while the shops are stocked ready for the festive period, it has taken months of preparation to produce this very special vegetable.

Growing sprouts is a year-round operation, with a spread of harvest from August for the earliest-maturing varieties right through to April. But it is the Christmas period that has the biggest effect on which varieties are chosen and the fields they will be grown on, and their yield is crucial as 40% of the UK area will be harvested in December, explains Farmacy agronomist Stefan Williams.

One of the most challenging aspects of growing sprouts is scheduling harvest over the busy Christmas period. Harvesting is a very slow and expensive process, Mr Williams explains.

“The operation to harvest the crop starts around 10 December to ensure the tonnage is accrued in cold store.

But this year, due to the mild weather, many crops destined for Christmas harvest reached maturity a month earlier, resulting in larger buttons with more defects which had to be harvested in November, adding to the scheduling headache for growers.

Production is centred on Boston in Lincolnshire and along the east coast into Scotland, where the sprouts hug the coastline for frost protection.

A strong soil to support the plant’s height, high biomass and long growing season is best for the crop, which has one of the longest growing periods of all the brassicas. This makes it important to leave a gap of at least five years to prevent the build-up of soil-borne diseases such as clubroot and sclerotinia, says Mr Williams.

Rotationally they fit well with potatoes, cereals and onions, but not with oilseed rape, as the volunteer burden is too high and herbicide choice is limited.

A lack of herbicides and insecticides is a constraint for growers and one of the reasons sprouts are transplanted from glasshouse-raised modules rather than drilled directly into the field. Modules are treated with insecticide to protect against cabbage root fly, negating the need to treat in the field.

Most varieties are planted out in May with a row spacing of 60-65cm using specialised transplanting machinery, says Mr Williams. This wide spacing facilitates inter-row cultivation, used to aerate the soil and control weeds, which is carried out two or three times before the canopy closes at about six to seven weeks after transplanting.

Charlock and runch are especially troublesome, as are later-germinating summer weeds since there are no contact materials except clopyralid, used for volunteer potatoes, he adds.

With canopy closure come difficulties with pests, which can reduce marketability and cause feeding damage to the plant and buttons which begin to form from the bottom up once the plant reaches 80% of its final height.

“By July and August, pest pressure is most prevalent. The diamond-backed moth, caterpillars, aphids and whitefly are quite an issue and we have to be fairly rigid in checking crops.”

One of the biggest challenges is getting the spray to the target. Some growers use air assistance or sprayers with drop-leg nozzles to try to penetrate into the canopy.

Moths and caterpillars are easier to control than mealy aphids and particularly the peach-potato aphid, so active ingredient rotation is important to avoid resistance, adds Mr Williams.

Slugs also cause a problem and are treated with pellets or, in some circumstances, with the biological control nematode Nemaslug. “It is expensive, but it works.”

The sprout canopy not only shelters pests, it also creates a microclimate, and when temperature and humidity build up so does disease.

This increase means later sprouts may need an additional fungicide application in February/March to combat the disease.

A typical fungicide programme will comprise four to five sprays through the season in the South and an extra couple in Scotland due to the longer season. “Fungicide availability is good and we have a lot of products we can alternate.”

The buttons themselves don’t tend to get disease, although they can suffer oedema, a physiological effect which causes spotting.

Nutritionally, sprouts are big users of nitrogen and potash, and they love calcium and magnesium too, explains Mr Williams.

“In the vegetable world it is one of the hungriest vegetables because of the frame and size of the plant. So you have to feed it accordingly.”

A typical fertiliser regime would involve top dressing every two to three weeks until 80% of final height with nitrogen rates between 230-290kg/ha.

Achieving height is critical for yield, pest pressure and ease of harvest. Nitrogen and water are crucial to achieving this and crops in Scotland are often irrigated to get sprouts through a dry summer.

Growing Brussels sprouts is not without its worries for John Mason, the production manager for Lincolnshire Field Products, a business that grows 485ha of the crop on its network of farms in Lincolnshire and Suffolk.

“Sprouts are a very expensive crop to grow. It is a long season with high inputs and the harvesting season lasts for eight months – longer than most people realise.”

“The pressure is really on in the 10-day run-up to Christmas, as up to 200t/day are harvested, graded and delivered to our customers, with only about 60% of the harvested yield [18-23t/ha] actually marketed once blemished, and over- and undersized buttons are graded out,” he says.

But it is in the five- to 10-month growing season where a lack of available chemistry for weed and pest control challenges production. Restrictions on herbicide approvals prevent a comprehensive armoury of products. Fat hen and redshank are particular problems and there is a lack of chemistry available for post-planting weed control. Metazachlor and clomazone are used, and although other products are available, crop safety is a concern, he explains.

Mr Mason says another challenge is pest control, not just due to the difficulty in reaching the target within the canopy, but also resistance and product availability.

Aphid control is now more difficult since the recent loss of the dummy pill, a seed pellet coated with insecticide, which is planted next to the living seed in the module. This provides the young plant with the right amount of insecticide without exposing it directly to the chemical, he explains.

Dummy pills are used on a range of brassica crops to control various types of aphid, but were removed by Defra and the Chemicals Regulation Directorate at the beginning of last season and then reinstated under an emergency authorisation for 120 days partway through the growing season. This meant some crops were treated, but others not.

The six- to eight-week window of protection afforded by the dummy pill reduces the need for insecticides to be applied early in the season.