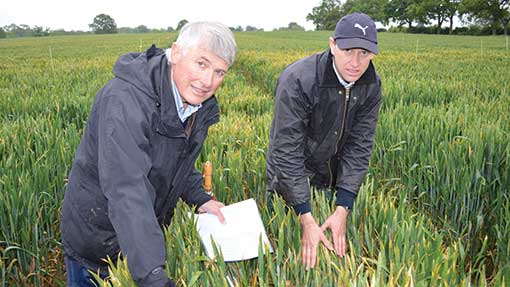 Wheat growers are being urged to use high rates of fungicides for their T3 ear sprays this month due to widespread septoria and rust diseases and the threat of fusarium.

Septoria and yellow rust are already at the highest levels seen in a generation, and if the warm and wet weather continues this month, fusarium could also be a danger.

Experts are warning that humid conditions around flowering during June could bring a fusarium outbreak similar to the severe ear infections seen in the wet summer of 2012.

Phil Bounds, research scientist at Adas, says disease pressure is so high in the area surrounding his base in Herefordshire that the benefits of fungicides are set to be high this season.

“In the West, the level of septoria is phenomenal, and in this showery weather crops are not growing away from the disease,” he says.

In the low-disease year of 2013, the yield response of using fungicides in winter wheat was 1.6t/ha, but this season Mr Bounds believes the benefit could be as high as 5t/ha.

Adas says the T3 head spray, applied at early to mid-flowering in wheat, should be aimed at fusarium and also to top up control of septoria and rusts.

“The risk of fusarium depends on the weather – if there is high humidly there could be a high risk. Conditions at early to mid flowering will be critical,” he adds.

The disease causes yield loss when the ear becomes infected during flowering, while it can also produce mycotoxins in the grain that are harmful to humans and animals.

No treatment gives 100% control, but an earwash azole fungicide, applied at early to mid flowering (GS61-GS65), normally in mid-June, is seen as the best approach.

The best fungicide yield responses to fusarium comes from the azole fungicides, with Adas seeing prothioconazole as the most effective azole, followed by metconazole, and then tebuconazole.

Top-up septoria control would come from prothioconazole and epoxiconazole, while rust control can come from all four these azoles and also strobilurin fungicides.

Adas suggests using a base level of a half rate of prothioconazole in a high-risk situation, and then adding in different azoles and a strobilurin if needed to boost overall disease control.

The shortage of prothioconazole, due to a production disruption earlier this year at a Bayer plant in Germany, could mean some growers will have to chose other azoles such as metconazole and tebuconazole.

Mr Bounds says in untreated fungicide trial plots, leaves three and four of wheat plants are completely lost to disease and these two leaves account for 10% of final yield, while leaf two and the flag leaf are already infected.

“There is more septoria than we can see today, as it takes about three weeks from infection to see visible disease,” he says.

Agrichemical group DuPont’s Jeremy Cartwright, based in Western England, says septoria has moved up with the growth in the crop and the disease pressure is high, even in treated crops.

“We were shocked by the level of disease when looking at untreated crops in May,” he says, referring to Adas trial plots near Dymock on the Herefordshire/Gloucestershire border.