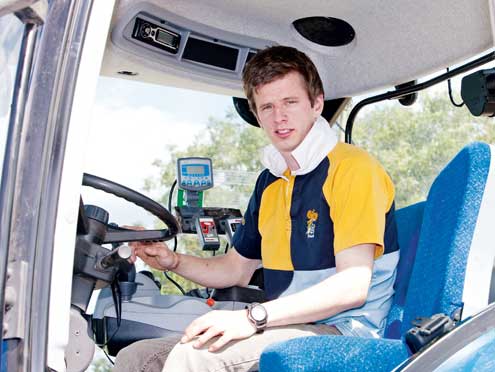 It’s disappointing news that the “Farming in the Park” event is having difficulties, and is having to look for another venue. The idea provides a brilliant platform for the farming industry to shout about what we do, how we do it and the cutting-edge technology we use, to those who are rather uneducated in modern farming and liken farmers to the straw hat wearing stereotypical farmer on a 1950s tractor that you see on TV adverts.

Wheat drilling has been a slow process, catching individual fields as conditions have allowed. At the time of writing it’s only 50% complete, and virtually nothing has been rolled. Luckily the extra delay has meant pre-drilling glyphosate applications have gone on to increased grassweed populations, following slow germination early on. Pre-emergences are consisting of Crystal (flufenacet + pendimethalin) + Twister (diflufenican), as well as Avadex (Tri-allate) on fields with a bad history of blackgrass, so fingers crossed for good control and cleaner fields next year.

The oilseed rape is looking well, although there is also an excellent crop of blackgrass in places. Early herbicide application for volunteers also included Crawler (carbetamide) in some fields for blackgrass, known to have resistance to ACCase and ALS chemistry. Hopefully the Crawler will give some control and upset the larger plants enough to allow Kerb (propyzamide) to finish them off later. Luckily slugs haven’t been too much of an issue so far and there’s no sign of biblical-sized flocks of pigeons to contend with just yet either.

While us arable folks haven’t had a brilliant year, we should remember those with cattle have had the TB issue causing them heartache, stress and financial difficulty for many years. To many people, a farmer is a farmer and it doesn’t matter whether they grow crops, milk cows or shepherd sheep, so it is important the industry sticks together and supports each other when difficult issues such as TB and badgers are faced, especially over the next few weeks.