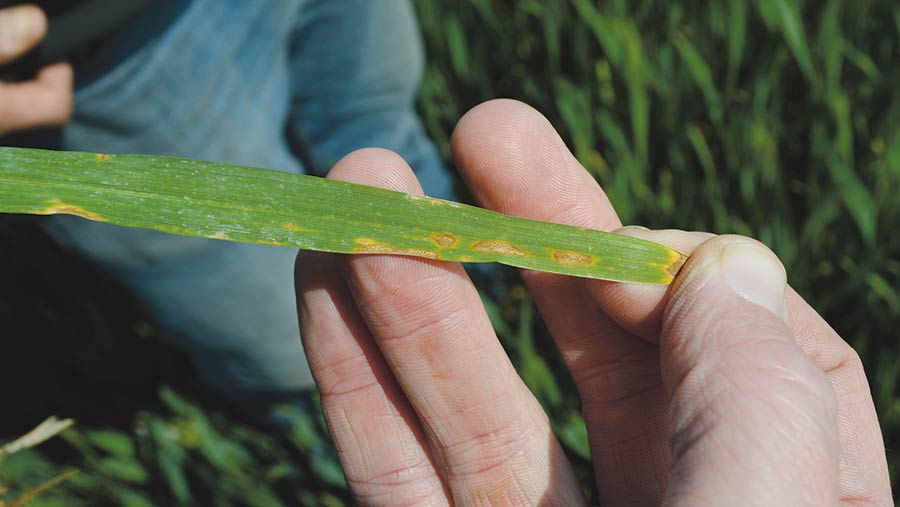 Wheat growers are being urged to be on high alert for septoria as near-perfect weather is causing the damaging disease to spread ahead of key T2 flag-leaf sprays.

Warm, wet weather across many wheat-growing areas should put growers on disease watch and they should not be misled if the the top leaves of their crops look very clean at the moment, crop experts warn.

Jonathan Blake, fungicide expert at crop consultant Adas, warns growers to expect a lot of infection and advises they should by looking at treating crops with SDHI-azole fungicide mixes at T2.

“Growers should expect a lot of latent infection after near-perfect weather for disease spreading up in the crop,” he tells Farmers Weekly.

See also: Wheat growers urged to use SDHI and strong azole at T2

Wheat crops look generally clean of disease at the moment as the top two leaves have only just emerged, but latent septoria infection is likely to be there, says Mr Blake.

“The big danger is that growers cut their fungicide rates, as this will be at the expense of yield,” he adds.

Bill Clark, technical director at consultant Niab, says growers should assume it is a high-disease year with plenty of septoria on the lower leaves of crops.

He suggests growers get out into their crops and examine leaf three as the younger, newly emerged flag leaf and leaf two should be clean of disease.

“If you see septoria on leaf three, even on the tip, that should ring the alarm bells that the T1 spray contained poor products or was poorly timed,” he says.

Mr Clark adds that growers in the North with later-maturing crops may a see a longer stretch between T1 and T2 sprays, and he advised them to use good rates of SDHI-azole mixes.

After highly SDHI-resistant UK septoria isolates were recently detected in glasshouse wheat seedling tests at Rothamsted Research, growers are being urged to stick to the fungicide-resistance guidelines.

Fiona Burnet, head of crop and soil systems at Scotland’s Rural College, says the guidelines have been updated to emphasise the need to use SDHIs with robust azole doses and to include the use of multi-sites in programmes.

Hover over the points on the map below to see regional agronomists’ advice on T2 fungicide sprays.

Azoles are particularly important in terms of helping to protect the SDHI, but also in widening the efficacy against yellow rust this season, says Prof Burnet.

Popular choices at T2 include products such as Adexar, Aviator and Keystone, which comprise SDHIs and one of the two best septoria azoles – epoxiconazole and prothioconazole – and also the straight SDHI product Vertisan.

Mark Hemmant, technical manager at advisory group Agrovista, is seeing plenty of septoria and rust in crops and suggests growers select a strong rate of azole, a good SDHI, a  multi-site and also a strobilurin to boost rust control at T2.

“With current showers and mild weather, the infection risk is massive. Remember that septoria is the biggest yield-robbing disease of wheat,” he says

Even with grain prices close to £100/t, he argues that disease control is key to give a decent yield and return from crops.

“With our weather and the varieties we are growing, farmers cut back on disease control at their peril,” he says.

“Reflection is particularly stuffed full of yellow rust and septoria, so we will need an SDHI plus an azole and chlorothalonil. You could also add in a strobilurin to extend the longevity of that protection,” he says.

Middle-of-the-road varieties will get a similar dose of an SDHI, azole and chlorothalonil mix. On cleaner varieties, Mr Wheeler isn’t seeing septoria on newer leaves, but he cautions that warm and wet weather makes for perfect septoria conditions.

“You could think about cutting back on rates slightly or dropping the chlorothalonil, but you definitely want to keep the SDHI because the disease pressure is there. On the whole, crops are looking quite good, but I think it would be very silly to cut back at T2,” he says.

Further north, Agrii agronomist Andrew Wallace, who covers East Lothian down to Northumberland, says septoria could be about to explode given the right weather.

He adds that recent wet weather is likely to have splashed disease inoculum up the wheat plants, but it has not really taken off yet because of low temperatures in the region.

If the weather turns warm, it is even more important to apply a comprehensive fungicide mix at T2 such as a SDHI-axole mix with a multi-site fungicide, he says.