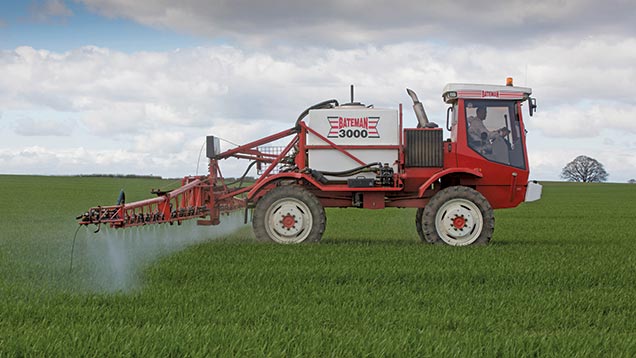 This season is shaping up to be another high pressure septoria year and varietal resistance may prove valuable during spells of poor spraying conditions.

Last year’s very high pressure year saw responses of up to 6t/ha to fungicides (treated versus untreated) and differences between varieties of up to 4.3t/ha for untreated and 3.6t/ha for treated plots in BASF trials.

See also: Septoria is the big disease threat to wheat this spring

In a normal pressure year, it is difficult to spot differences between varieties rated 4 and 6 for septoria, says KWS product development manager John Miles.

“But last year, we saw differences between 4s and 6s. So the key question is, can farmers take a more tailored approach according to variety?”

This is especially important as agronomists come under pressure this year to help farmers cut input costs with wheat at only £140/t.

Agronomist at Prime Agriculture, agronomist Philip Simons, says that half of the varieties being grown on the company’s client farms have a 5 rating, 25% are 4 and 30% are 6.

“We are starting to see a move to more resistant varieties such as Lili, which has a 6 rating for septoria and an untreated yield of 92%.”

To look at whether different varieties require tailored fungicide programmes, KWS and BASF are carrying out joint trials at five sites in Lincolnshire, Suffolk, Cambridgeshire, Oxfordshire and Herefordshire.

Plots are half a tramline in width, and as Mr Miles highlights, are managed as part of the commercial farm.

“In last year’s high pressure situation, at Rawcliffe, we saw a 3-6t/ha response to fungicides – the average being 4.4t/ha,” says BASF regional sales manager Steve Dennis. “While all varieties showed a response, there were differences (see graph above).”

He noted that there was greater variation between varieties for untreated yields than for treated. While both lines are largely parallel, there tended to be a bigger response to fungicides with lower rated varieties.

But the trend line shows higher rated varieties were still seeing 63% of the yield response seen in a variety rated 4.

“Farmers are not going to risk 63% of the yield response. You are still going to see a high level of response in a high pressure year and is not a way to cut costs,” explains Mr Dennis. He concludes that farmers need to take the same robust approach regardless of variety rating.

Mr Simons agrees, pointing to Lili with its 85% untreated yield on the Recommended List.

Compared this with the treated yield and there is over 1t/ha response for a variety that is more resistant and at today’s prices, that extra tonne would pay for a typical fungicide programme costing about £130/ha, he explains.

“The T0 and T1 treatments are being covered by this response and growers should not cut back.”

Instead, he believes the real saving is with drilling date, as earlier drilled crops have more to lose to septoria risk.

“Early drilled crops are not low input and you need good growth to get yield,” he says.

There are benefits of variety resistance and Mr Simons sees it as an insurance policy for when the weather turns against you. “It gives you some wriggle room, but it is not to be banked on [in preventing the disease].”

Mr Dennis adds: “You may treat crops rated 4 before the more resistant ones. But this is for when everything else is equal, as drilling date is a bigger factor. Any 6s drilled earlier will be higher priority.”

Mr Simons believes there is now more emphasis on prevention due to the decline in the curative efficacy of azoles.

“Septoria control comes down to a combination of variety plus chemistry and timeliness of application. In addition, variety resistance also helps with protecting chemistry against disease resistance.”

At T0, growers are advised to go with a multisite, such as chlorothalonil, for septoria. Have a partner product like an azole.

“Save the azoles with stronger activity against septoria for T1 and T2,” says Mr Simons.

At T1, BASF recommend epoxiconazole with SDHI boscalid (Tracker at 1-1.25 litres/ha) plus 1 litre/ha of chlorothalonil. There are several SDHI triazole combinations appropriate for use at T1, adds Mr Simons.

“We saw big responses to chlorothalonil last year and for a small spend, it is worth including it,” says Mr Dennis.

“If rust or eyespot is an issue, you can add in a strobilurin like Comet (pyraclostrobin) at T1.”

At T2, both suggest an SDHI partnered with an azole such as 1-1.25 litres/ha of Adexar (epoxiconazole + fluxapyroxad) plus 1 litre/ha chlorothalonil.

“We are very much in a preventative approach and need to have two SDHIs in a programme plus robust rates of azoles,” says Mr Simons. “Where none [SDHIs] were used last year, the results were awful,” he says.

Results from one season on a high pressure site in Oxfordshire highlights the importance of nutrition in getting the most from fungicides.

Trials were carried out to look at the interaction between variety, fungicide programme and nitrogen rate, says John Miles.

Plots received an extra 30 or 60kg/ha of foliar nitrogen in early May, a robust (two SDHIs plus chlorothalonil) or a more traditional fungicide programme (no SDHI and lower rate of chlorothalonil) across different varieties.

“There was no real response to nitrogen with the less robust fungicide programme.”

However, using a more comprehensive programme allowed better use of the additional N.

“It shows the importance of getting both the chemistry and nitrogen right,” says Mr Miles.