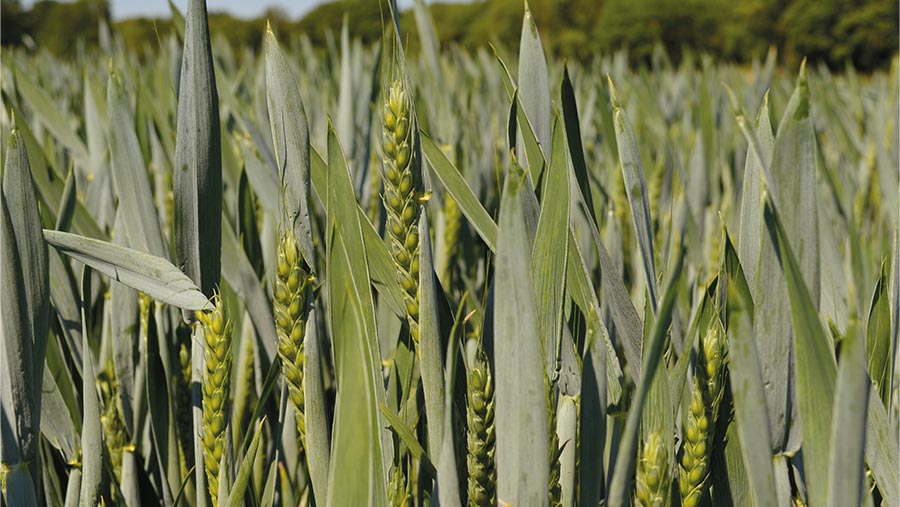 The top-yielding hard-milling feed wheat variety Insitor is set to sell out this autumn, with a market share of up to 4%, reflecting its barn-filling potential and good grain quality.

The variety, from plant breeders Syngenta, outyields other popular hard feed wheats, such as Gleam and Kerrin, and performs well under stress, which could be particularly relevant after this spring’s drought.

Tracy Creasy, the group’s seeds marketing manager, said the variety – named after the Roman god of sowing – will be aimed as a October drilling wheat while it performs well as a second wheat.

“We expect the variety to sell out, with a market share of 3-4%, and it will be targeted at the October drilling slot,” she told a briefing as the group was highlighting the variety at Cereals LIVE 2020.

It equals the top soft milling feed wheat Skyscraper (105%), according to the AHDB Recommended List.

Matt Bull, the group’s seeds technical expert, said for wheat growers looking to drilling early, Gleam and Graham would fit the bill, while Insitor and Shabras can be drilled from mid-September, but preferably from October onwards.

He added that Insitor has good specific weight (78.3kg/hl), good septoria resistance (6.6), is good on light and heavy land, fits in well as a first and second wheat, and has orange wheat blossom midge resistance.

“High specific weight varieties tend to perform well under stress conditions, such as drought,” he said.

The variety was also top yielder in group trials as a second wheat, which may be due to having Hereford in its parentage, a variety that shows good tolerance to take-all disease.

Growers should also note the variety’s slightly low brown rust resistance score (4), a moderate straw strength (6) in line with Siskin and below other hard feed wheats, while it is slightly later to maturity than the other Syngenta wheats Gleam, Graham and Shabras.

Early maturity and high yields from winter malting barley variety Electrum, newly approved for brewing, are set to see good demand for its seed this autumn, with enough for 5% of the market.

The Syngenta variety along with stablemates Craft and Venture are the only three winter malting varieties on the AHDB Recommended List, with the rest of the malting market made up of older heritage varieties such as Maris Otter and Flagon.

Electrum’s yield of 97% is ahead of Craft (96%) and Venture (92%), with good rhynchosporium resistance and really early maturity to harvest.

“For growers looking to cut early, this variety can be seven to 10 days earlier than Craft,” said Mrs Creasy.

The variety has performed particularly well in the eastern malting barley-growing heartland, and its earliness could help spread risk at harvest.

Contracts for the variety are being offered for autumn 2020 drilling, and with enough seed for 5% of the winter barley certified seed area, it could take some share from Craft’s 10-12% share and also from Venture and other malting varieties.