As thoughts turn to managing wheat diseases and keeping crops clean, Farmers Weekly has teamed up with three growers and their agronomists to track their progress through the spraying season.

Joining us on the farms at key timings are independent experts from Niab Tag, to give insight and advice on disease control strategies, and to consider the implications and costs of planned control measures.

In the first of three articles in the Disease Force Cereals series, we introduce the farms and look at the challenges they are likely to face in the coming weeks. You can also follow the Twitter updates at #diseaseforce.

See also: Video: How to properly set up your crop sprayer 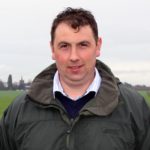 A deliberate move away from disease prone varieties is helping agricultural manager John Haynes to plan the fungicide programme for the three farms that he manages for MJ & SC Collins in Essex and Hertfordshire.

Having experienced a severe yellow rust problem two years ago with the feed variety Oakley, when additional sprays had to be employed, he now grows both Group 1 and 4 wheats, mainly opting for varieties with good disease resistance and a track record on the farm.

“Our 1,200ha of land is spread out across three sites, so getting round all 760ha of the wheat can be a challenge,” he says. “Having to fit in extra passes isn’t something we can do easily.”

The arrival of a new 8,000-litre Agrifac sprayer has helped with this logistics challenge, giving him greater flexibility and better work rates, as well as allowing higher water volumes to be used.

“It’s put us back in control. We try to run a protection-based system with fungicides so that we stay ahead of any disease problems.”

His agronomist, Andrew Blazey of Prime Agriculture, points out that getting on top of rusts is easier than getting on top of septoria, so the varieties are treated according to their ratings, with tweaks being made to rates, where appropriate.

See also: Advice on getting ready for the yellow rust onslaught 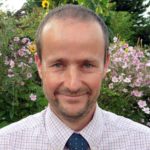 “Otherwise, we will differentiate between them at T3, when the milling varieties will get a more robust treatment for fusarium.”

Low rates are avoided, while products based on different triazoles will be incorporated into the programme as the season progresses, to protect the chemistry for future use, he adds.

With a range of drilling dates across both first and second wheats, the T0 was imminent when the Farmers Weekly Disease Force team made its first visit. Other than the usual winter carryover of septoria on older leaves, crops were fairly clean.

A block of Trinity almost at growth stage 30 will be the first to receive a T0 of chlorothalonil/tebuconazole, which will then be applied across all of the wheat.

“That has a cost of £7-8/ha, and we work on a budget of £90-100/ha for a four-spray programme, making some of our decisions very close to the application date,” says Mr Haynes. “That way, we can change chemistry, if required.”

Two SDHIs were used last year, at T1 and T2, so that is likely to be repeated in 2017, with new introductions being tested.

“We did have some brown rust in our Crusoe last year, so we will be watchful for that. Otherwise, we are growing Skyfall as the other milling variety, and then Relay, Gator and Evolution as our feed varieties.” 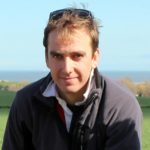 Kent grower Antony Redsell of the Brook Farm Partnership, near Herne Bay, is achieving very high yields of 11t/ha or more with his milling wheats, but still managed to keep his fungicide spend down to about £100/ha last year.

Working with independent agronomist James Rimmer of CCC Agronomy, Mr Redsell adjusts his approach according to the variety in the ground and the disease pressure at the time, using four sprays at the main timings in most years.

However, that number may not be necessary in 2017, as his 400ha of Group 1 and 2 wheats were drilled later last autumn, right through until early November.

As a result, there was very little disease evident when the Farmers Weekly Disease Force team made its first visit in March.

“We may not need to use a T0 on everything,” points out Mr Rimmer. “At this stage, the crops are pretty clean.”

However, with 130ha of variety Crusoe in the ground, they will be keeping a constant eye out for brown rust as the season progresses, as the variety’s rating has slipped to 3 and the area is known for the disease. 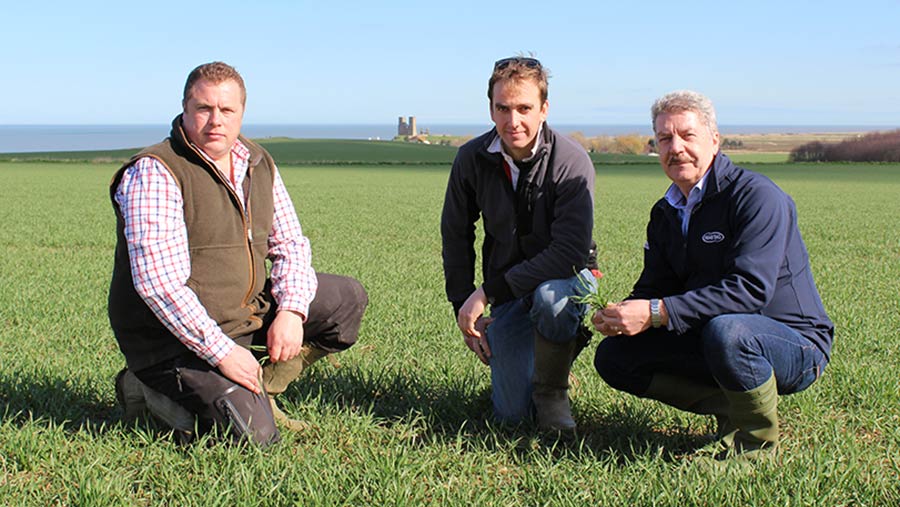 Otherwise, his block of Cordiale is likely to require a robust approach for all foliar diseases, while both Skyfall and Trinity offer more flexibility.

“These two varieties give us some leeway, both with the products used and the amount we spend,”  says Mr Redsell. “For this reason, the new Group 1 addition Zyatt is of interest for next year. It looks to be cleaner and earlier.”

Farming 1,000ha across three sites, Mr Redsell sticks to milling wheats and grows them in a six-year rotation, which includes two spring break crops and maize for anaerobic digestion. He also grows specialist crops, hops and onions, and lets some land for potatoes. 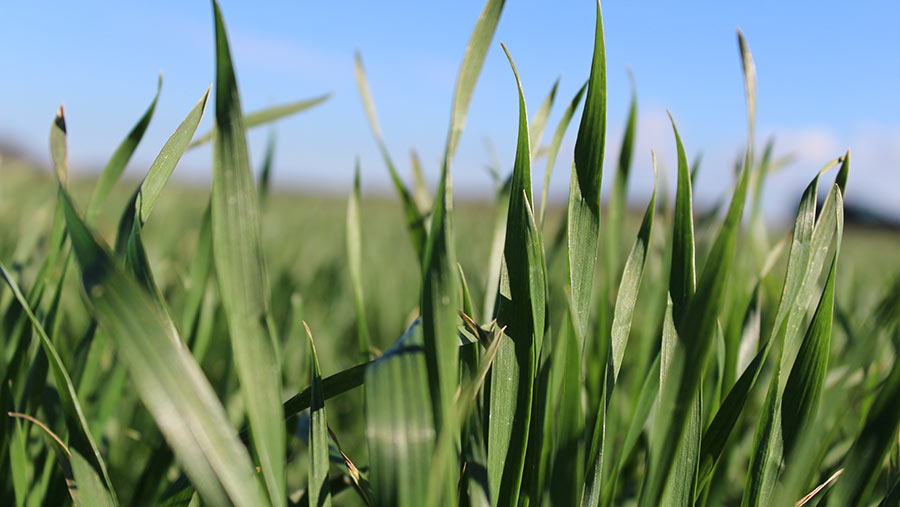 Looking ahead to the start of the spraying season, they hope not to have to use two applications of the new generation SDHIs, saving that firepower until T2.

“It’s most likely that we’ll use a boscalid-based treatment at T1, adding in a strobilurin on the Crusoe,” says Mr Rimmer.

“We also plan to alternate our azole partners, rather than relying on one active ingredient.” 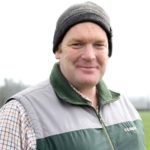 Septoria is always the main disease target for farm manager Mark Wood in south Herefordshire, who has 320ha of hard feed wheat in the ground on the 1,100ha he oversees at Fawley Court Farm.

His four varieties – Costello, Revelation, Evolution and JB Diego – have been chosen for their all-round disease resistance or previous performance, as well as sowing date suitability and local market requirements.

Having drilled all of them up to two weeks later than normal, from late September to mid-October using variable seed rates, he is now firming his plans for the season ahead and anticipates using four sprays on most of the wheat, unless April turns out to be very dry.

“For the all-important septoria control, it’s essential that my T1 timing is spot-on,” he says.

“With that in mind, we will be applying the T0 in the first week of April, to hit leaf 4, with the most forward crops being the priority.” 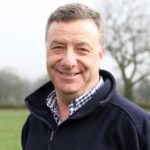 His agronomist Andrew Goodinson of Hutchinsons suggests that an application of chlorothalonil at T0 is a sensible precaution, only costing about £4-5/ha, and fitting in with the need to apply Broadway Star (florasulam + pyroxsulam) for brome control.

“It’s a management tool, rather than a yield response guarantee. It can be tank-mixed with the herbicide and it does give some insurance against any later delays.”

Septoria can be found on the older leaves of all four varieties – most of which were at growth stage 23-24 at the time of the Farmers Weekly visit – with mildew also showing on some Revelation being grown on a high-risk site by the River Wye.

“The mildew can wait until T1 when the addition of a mildewcide will give six weeks cover,” adds Mr Goodinson.

The big decision on whether to use two SDHI applications, at both T1 and T2, will depend on the weather and any disruption to spray timings, but dirtier varieties will be treated first to minimise risk. 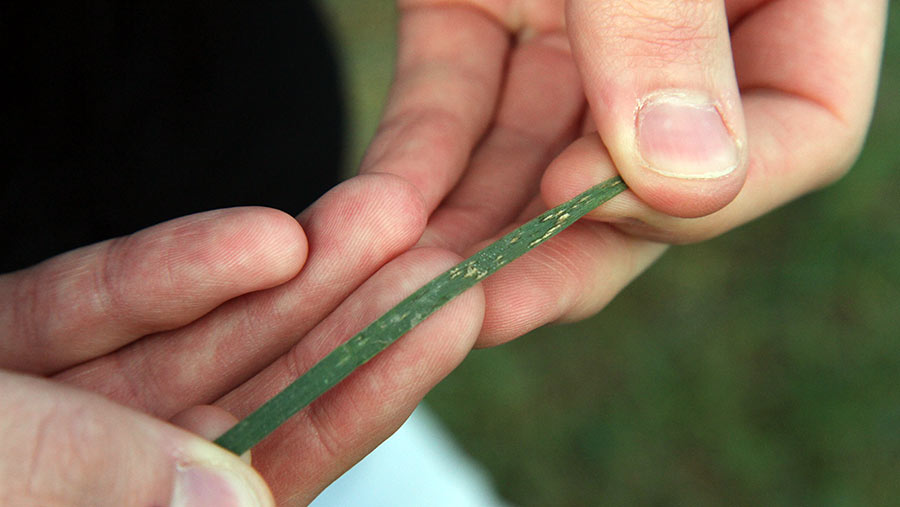 As an extra help, their drilling date was based on their disease susceptibility, with the weakest of the four – JB Diego – being the last to go in.

“Fungicides do pay for themselves,” notes Mr Woodd. “I have outline plans for wet, dry and intermediate years so that we can react accordingly. Fortunately, we can get round all of the wheat in two days with the sprayer.”

He spent an average of £110/ha on fungicides in 2016. “Having heard the advice, there may be scope to reduce that in 2017, by tailoring treatments to individual varieties,” he acknowledges. “There’s less to lose with some of them.”

The responsiveness of varieties to fungicides, not just their disease resistance ratings, should be taken into consideration at the planning stage this year, believe our Disease Force independent experts. 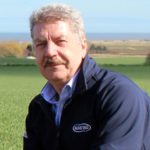 It’s important to recognise that the two are not the same thing, stresses Bill Clark, technical director of Niab Tag, who advises all three growers to only use resistance ratings as a guide.

“You do get varieties with good disease resistance ratings, which are still very responsive to fungicides,” he says. “Then there are others, with high untreated yields, which don’t give the same level of response.”

These are the ones that offer flexibility and may allow budgets to be reduced, as there’s less yield at risk if things go wrong. On our three farms, good examples of these are Costello, Evolution, Trinity and Skyfall.

“They’re not as risky and won’t suffer as much if time runs out or the weather turns. In contrast, for a variety with a known weakness, there has to be a definite plan.” 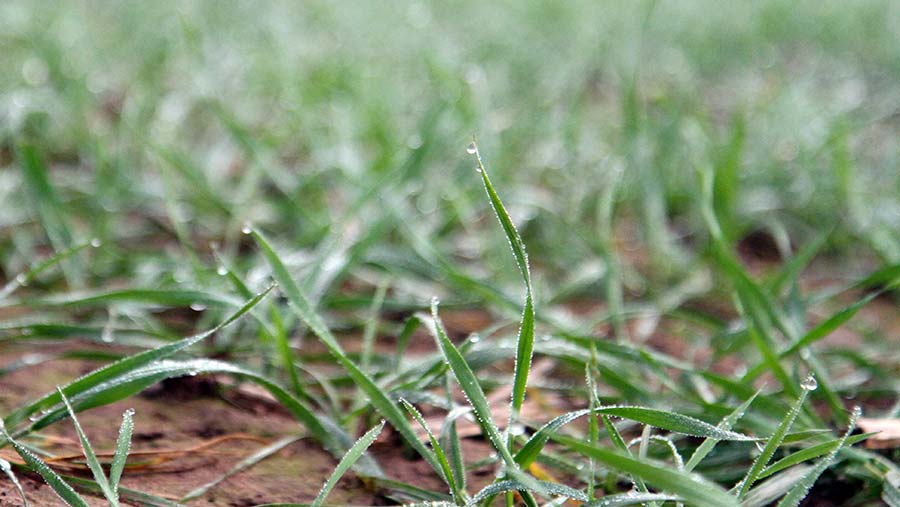 Mr Clark adds that yellow rust resistance ratings should be seen as dynamic, as another new race of yellow rust was confirmed in 2016, and only three winter wheat varieties have resistance to the disease at both the seedling and the adult plant stages. 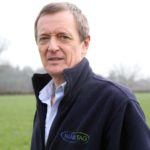 “There wasn’t much rust evident on our visits, but nationally there are reports of it appearing. So growers should be prepared.”

With all three growers moving away from the more susceptible varieties and drilling much of their wheat later than in previous years, disease levels to date are low and in line with expectations.

That means there may be scope to re-think the basis for a T0, says Richard Overthrow, Niab Tag’s regional agronomist in the West.

“The T0 is an interesting debate this year,” he says. “As far as septoria is concerned, you only get a response from it if your T1 is late.”

That’s why variety has to be taken into account, as the bigger decision at T0 is whether or not you’re likely to need yellow rust control – which will add another £6-7/ha to the cost of chlorothalonil alone, he notes. 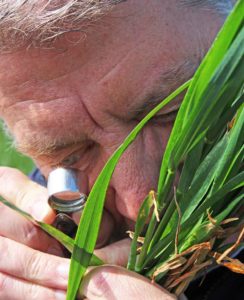 The Niab Tag fungicide planning tool shows that a fungicide spend of below £100/ha is appropriate for some of the varieties being grown on our farms (see ‘Suggested fungicide spend by variety’).

His other reminder is that accurate spray timing is essential, and as many crops aren’t very advanced yet, growers must be prepared to wait for leaf four before the start of T0 spraying.

“Cut the plant open to check – there’s a difference between growth and development. If need be, do the plant growth regulator application separately to the T0.”

Reacting too quickly creates problems for the timing of subsequent sprays and risks leaving the crop exposed for longer than three weeks – something which needs to be avoided for good septoria control.

“Given the loss of curative activity in the azoles, it is very difficult to rescue this type of situation now. So hold off until crops are ready.”