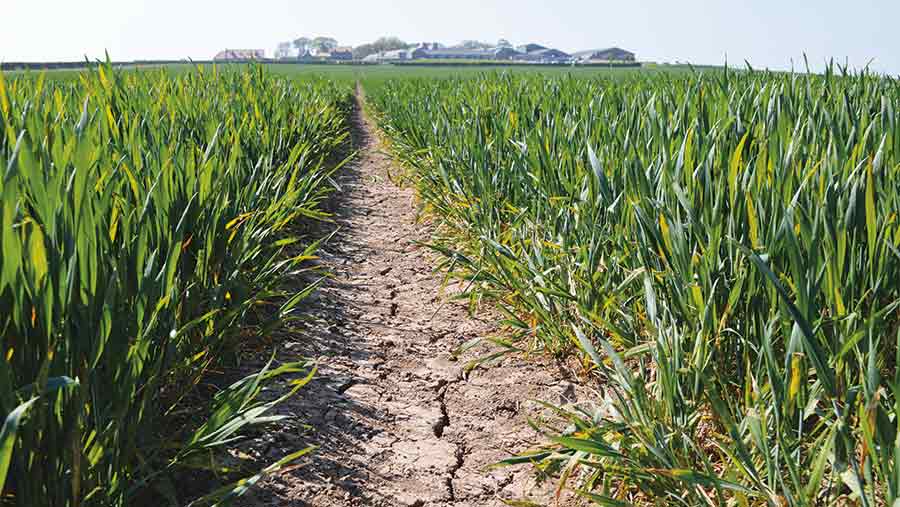 Rod Smith is hoping for a 15t/ha-plus bumper wheat crop to match or even beat his world record of last summer as his fertile coastal land dries out after heavy winter rain.

He has chosen a historically high-yielding field that slopes down towards the causeway to the tidal Holy Island as the most likely spot to better his bumper wheat crop of 2015.

Most of his annual rainfall fell in the six winter months, putting his crop on the back foot, but drier spring weather has turned him more optimistic in his northern corner of Northumberland.

“I am hoping for 15t/ha from that field, especially with cooler weather on the coast leading to a long grain-filling period,” he tells Farmers Weekly.

He is tweaking his winning formula with a partial switch to liquid nitrogen and earlier and extra micronutrients, while also driving up soil organic matter across the farm.

This season’s wheat was drilled into good conditions, but was put under immediate pressure as half the farm’s average rainfall of 600mm fell in the three months from October to December.

His crops survived, but further rain into January put them under strain as his relatively shallow farm drains struggled, while winter high tides gave little escape for excess water.

“The extra 6in of rain in January nearly killed us, and the fields took a long time to drain,” he adds.

He is growing the variety Dickens following vining peas, so there was plenty of organic matter and residual nitrogen in the soil. This crop stood out on Mr Smith’s 400ha arable farm at Beal some 10 miles south of Berwick-upon-Tweed.

See also: Growers make the most of fertile soils to achieve bumper yields 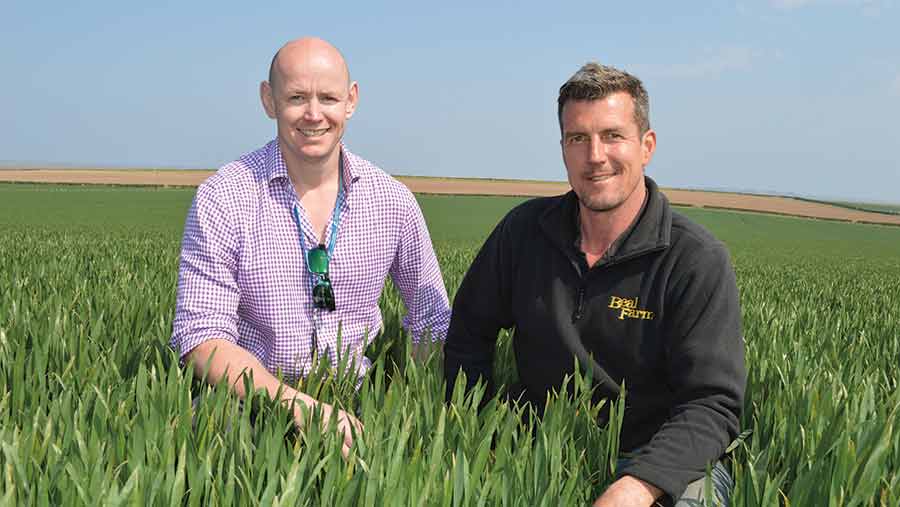 Working with Andrew Wallace, agronomist at advisory group Agrii, they decided to raise nitrogen rates slightly and try out some liquid fertiliser.

Mr Wallace calculated there was 30-40kg/ha less nitrogen in the soil than anticipated due to the wet winter, and so advised a higher nitrogen rate and a switch to liquid when the crop was most hungry.

A dry spell in March allowed an early application of 80kg/ha of liquid nitrogen along with sulphur to give the crop a quick uptake of nutrients and also improve the evenness of application, especially on the headlands.

Solid stabilised urea was used for the second and third applications. They also plan to come back with liquid for a flag-leaf spray to give the crop a four-way split of 320kg/ha of nitrogen, up 10kg/ha on last year’s record crop.

The micronutrient strategy was also tinkered with by bringing zinc and copper sprays to the T0 timing rather than T1, while it is planned to delay boron from T1 to T2, when it is the most beneficial ahead of flowering.

There is also an extra phosphate, potash and micronutrient mix planned at T1-1/2 to feed the crop and look for a higher yield. All these changes were prompted by a tissue test to check on nutrient levels.

Phosphite was again added at the T0 timing in March to aid rooting, while all phosphate and potash was applied in March, with a liquid top-up planned at the T2 timing.

The fungicide strategy is largely unchanged, although the T1-1/2 spray will be just a plant growth regulator with no multi-site fungicide added. This season’s cost are estimated at £130/ha.

The disease outlook was severe at Christmas, with high levels of septoria seen across the region. However, cold and wet conditions in early spring meant inoculum did not develop quickly.

“The crop is now racing through its growth stages. There is septoria, but it is not moving up in the crop,” says Mr Wallace.

The late start to the season and current rapid growth mean the gap between T1 and T2 could be a narrow three weeks rather than the more traditional four.

“The flag leaf is emerging quickly, but we don’t see this as a bad thing, as there is less time for the emerging leaf to become infected,” he says.

The variety Dickens showed a vigorous growth habit in the early spring. This tends to suit the northern region from East Lothian and down into Northumberland, says Mr Wallace.

Seed rates are slightly higher than traditional practice at 330 seeds/sq m to give 800 heads at harvest, as conditions in the area give smaller heads and so fewer grains a head.

The hope in north Northumberland is for a summer like last year, when there were no days warmer than 25C – higher than this grain filling ceases – and low night time temperatures to limit crop respiration.

“Last year, solar radiation in the area was 20% above that in 2014 which certainly helped to give us the higher yield,” says Mr Wallace.

Mr Smith is looking further ahead and will focus on improving organic matter and soil structure. He will apply hen and cattle manure and malt waste to his land, and plans to chop most his straw.

His latest move is to undersow spring barley with grass seed. He wants to establish a three- to four-year ley that a neighbour can use to cut silage and graze sheep. He hopes this will improve the soil even further.

Clearly nitrogen has a positive effect on yield, so Mr Smith is working hard to show that phosphate, potash and manures have a similar positive effect.

What he wants is a dry summer with plenty of cracking to get air back into his soils, as his deep clays soils never suffer from drought.