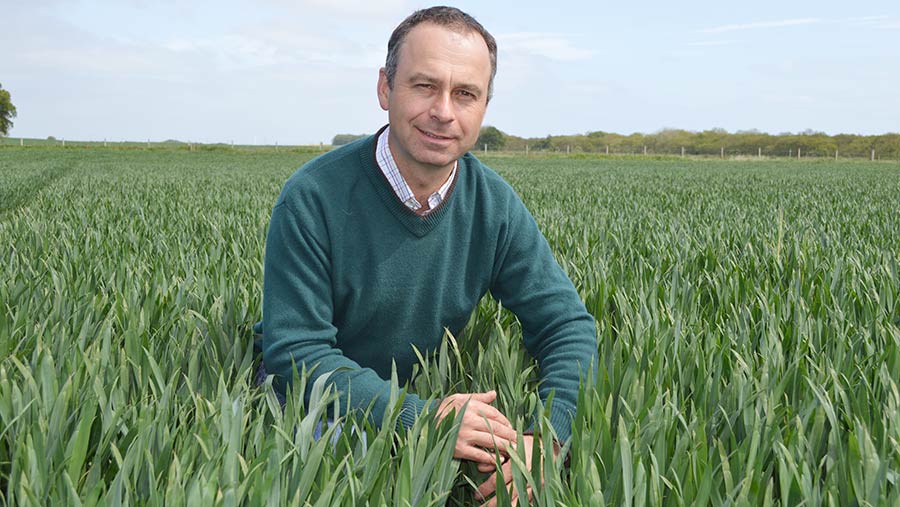 Donald Ross with his Skyscraper wheat

Little and often is the crop nutrition strategy that has helped Donald Ross hit top yields on his light soils in the far north of Scotland and win awards for his harvested crops.

His wheat yields have hit close to 15t/ha in his corner of northeast Scotland, helped by an increasing focus on feeding his crops and soil health through rotation and plenty of cattle manure.

The results have seen him take two top finishes in the Yield Enhancement Network (YEN) organised by crop consultant Adas, with his 2018 chosen crop achieving a yield of near 100% of its potential.

“Last year’s crop had potential but the yield was a real surprise as it was so dry through the spring and summer,” he tells Farmers Weekly.

One of the answers may be the old red sandstone which lies below his light sandy loams and tends to hold on to moisture, and another could be his autumn nitrogen and five-way nitrogen split in the spring.

Mr Ross came second in the best potential yield category of YEN 2018 with 98% of his potential of 10.8t/ha, beaten only by a Norfolk crop of rye which achieved 103% of its potential yield – perhaps due to that crop rooting deeper than first thought.

The Scottish farm’s soils range from blow-away sands to dark peat, and crops no doubt gain from the mixed farm nature of Rhynie, just outside the village of Fearn, near the coast 25 miles northeast of Inverness.

The 256ha farm is about two-thirds arable with 100 suckler cow and 250 breeding ewes. In addition, access to a neighbour’s pig slurry helps feed his arable crops of winter wheat, oilseed rape, spring barley and oats, with some land rented out for potatoes and the rest in temporary and permanent grass.

“Our aim is to maximise the soil health and balance soil nutrition,” he says.

At harvest 2017, he won the YEN gold award for the best potential yield with a wheat crop following potatoes.

But in the same year his best field came after establishing a crop into chopped oat straw and pig slurry when his combine yield monitor touched 18t/ha in some areas, compared with his 10-year rolling average wheat yield of 10.8t/ha.

So for his 2018 harvest wheat crop, he chose a field with a previous oat crop, but that year he needed the straw for his stock so the field received only the pig slurry. 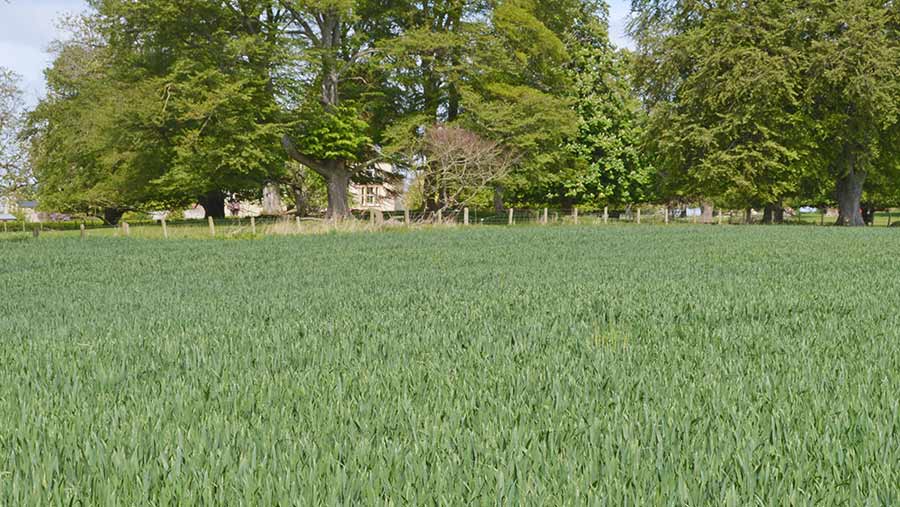 Grafton is one of three wheat varieties grown, together with Zulu and Skyscraper

The wheat field was ploughed, disc-tine cultivated and the biscuitmaking variety Zulu was combine drilled in the first week of October with 23.4kg/ha of nitrogen and some phosphate.

The farm is outside a nitrate vulnerable zone so he is allowed to apply some nitrogen in the autumn to get the crop going before the northern Scottish winter kicks in and brings growth to a standstill.

“We find that the nitrogen just gives the crop a wee kick on in health terms while the phosphate helps to get the roots going,” he says.

The crop was drilled at 400 seeds/sq m looking to produce 360 plants/sq m with an aim of 700 heads/sq m at harvest. However, the crop had a less-than-ideal start with a wet autumn followed by a dry spring.

Looking back, what saved the crop was probably the Beast from the East storm arriving in late February and dumping 400mm of snow, as this gave the wheat crop enough moisture to deliver a 10t/ha-plus yield even in a dry year.

“The Beast from the East saved the crop because after that there was very little rain in March, April and May of 2018,” he says.

Luckily, he had managed to get 20kg/ha of nitrogen on the crop before the snow hit, along with some sulphur to feed the crop while it was under the snow blanket.

Last year was certainly dry up along the east coast of Ross-shire, with only 520mm for the whole of 2018 against an annual average of 700mm, and this year there had been only 150mm up until late May.

There were four other applications of solid nitrogen fertiliser to give a five-way spring split while potash was applied at the end of February and early May on his light soils which are always short of the nutrient.

On the minor nutrient side, manganese is very important on such light land and so every fungicide application include this micronutrient along with copper, which is applied in April.

A standard four-spray fungicide approach is used with the main disease threat being septoria while the manganese helps against mildew.

The programme includes just one SDHI, at the T2 flag leaf timing, in a full programme costing £107/ha.

There is a tendency for wheat in northern Scotland to give low specific weights, so there is a need to keep the ear clean with a T3 head spray as harvest is usually in the second to third week of September, or even into October in a late year.

Animal feed compounders usually demand at least 72kg/hl for wheat and as the big nearby distilling plant at Invergordon on the Cromarty Firth has been using imported maize, wheat has to find a home in the animal feed market.

This season he is trying the new variety Skyscraper following a potato crop, and trying out some bio-stimulants in the spring to help rooting growth and a more balances approach to micronutrients.

He believes the Skyscraper wheat does not look thick enough and a neighbouring field of Grafton looks better, so only time will tell.

Yield is the key to his profitability and as part of a AHDB benchmarking scheme he has calculated that it costs him £140/t to grow wheat, and this includes a value for rent even though the farm is owned.

“Variable costs are largely fixed but we know if we buy tractor that’s a big cost in terms of depreciation so benchmarking helps to keep costs down,” he says.

If yield is key, then rainfall is key to yield as we stood in his field in late May it was very dry. “If we get rain then wheat yields will be 11.5-12.0t/ha, if no rain then it’s down to 9-9.5t/ha,” he says. Fortunately, rain arrived soon after so there is optimism for harvest.