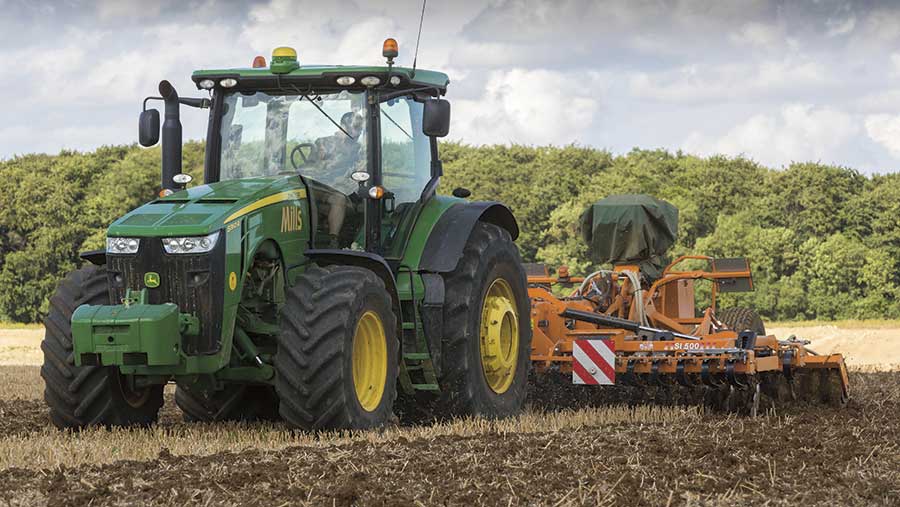 Top wheat growers with the highest gross margins tended to use both techniques, according to farm data collected over many years by agronomy advisory group ProCam.

The company examined 195 of its grower customers in its 4cast programme, and the top 25% in terms of gross margins shied away from heavy cultivations with a plough and drilling by calendar date.

The group’s technical director Tudor Dawkins says, looking over 14 years of farm data, there is a 0.5t/ha yield advantage from using non-inversion minimum tillage as opposed to ploughing.

“The yield effect is due to growers doing land operations more quickly and so being more timely,” he tells Farmers Weekly.

In addition, there is a clear saving of costs in term of diesel and from machinery wear and tear.

Direct drilling can cut costs further, but there are too few no-tillage operators in the group sample to show a clear indication.

The 195 farms were spread nationwide but skewed in favour of the group’s heartland of Cambridgeshire, Suffolk and Essex.

Nick Myers, the group head of crop production, says the top 25% of its grower sample tends not to be prescriptive about drilling date.

“The key is not to have a set drilling date, but to react to the field situation and season,” he says.

The optimum drilling date for wheat is the last week of September and into the first few days of October in non-blackgrass areas, but the top 25% of growers had a wider spread of drilling than the others.

Mr Myers explained that the top growers were happy to start drilling later with peak numbers drilling after 8 October compared with before 8 October for the average, yet the top 25% still managed to finish drilling earlier.

These top 25% spent less per hectare on variable costs of seed, sprays and fertiliser than the average yet still saw higher yields and £200/ha higher gross margins.

There was a clear move to later drilling in the autumn of 2015 from the previous year and anecdotally a further move in autumn 2016, reflecting the seriousness of the blackgrass.

In addition, Mr Myers points out a key benefit from delayed drilling is that soil-acting residual herbicides work better in the cooler and more moist conditions found later in the autumn.

Dr Dawkins adds that a delay in drilling after the end of September cost growers 11kg/ha a day in the bumper harvest year of 2015, but the benefits of having less blackgrass emerging in crops far outweighs this yield penalty.

John Bianchi, the group’s UK managing director in charge of 120 agronomists, says the top 25% of its growers produced wheat at a lower cost than a world record breaker in 2015.

One further point is that growers should not adopt a knee-jerk reaction of dropping winter oilseed rape as it is the most profitable crop to grow and it consistently improves the yield of the following winter wheat crop.

“Growers should not turn their backs on oilseed rape, there are problems with the crop but the profit figure do stack up,” he says.

All the speakers took part in a ProCam briefing on 1 June.