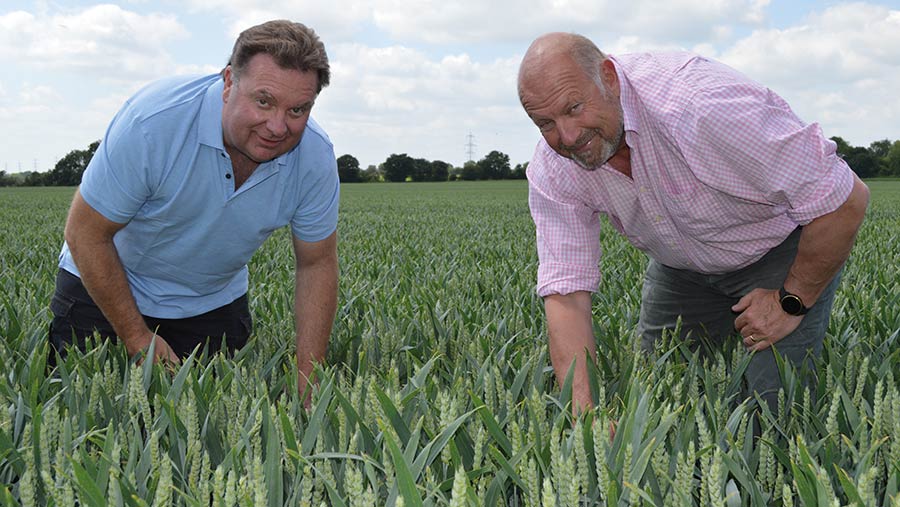 Feed wheat variety Saki is new to the AHDB Recommended List and is looking good in the field this summer. We visit Suffolk wheat grower, Tony Pulham, to find out more about this variety.

Mr Pulham is impressed with his Saki winter wheat seed crop and says commercial growers could trim fungicide costs by growing the variety.

The feed wheat has given high yields, shows short stiff straw with good disease resistance, and flexibility when grown on different types of soils and across a range of drilling dates, although it is late to mature.

His Saki crop last year just pipped Skyscraper – another big-yielding variety – at harvest for yield on his Suffolk farm where he focuses on growing seed crops of big-yielding feed wheats.

“We look for robust varieties which are cheap to grow for the end commercial users with the best agronomics and a good yield,” he says.

Mr Pulham spent £125/ha on fungicides for his seed crop of Saki this season, but says a commercial grower could easily slice £25/ha off that cost and spend £100/ha, or even down to £90/ha.

Saki is a touch behind Skyscraper for fungicide-treated yield on the AHDB Recommended List, but its disease resistance package and short stiff straw has impressed him as he looks for a yield from the variety this season well above 9.5t/ha.

“I would grow Saki ahead of Skyscraper as I like the variety and the variety likes me,” he says.

Last year, both varieties yielded about 8.5t/ha, with the Saki a touch ahead, but this yield was down 25% on average yields after a poor growing season up to harvest 2020.

Mr Pulham is growing 260ha of winter wheat seed crops on the 800ha he farms at Brockford Hall, although wheat usually amounts for 50% of his cropping, while he also grows seed crops of spring barley, spring beans and combinable peas.

This year he is growing five main wheat varieties – Saki, Skyscraper as the top yielder on the Recommended List, Wolverine as an early driller because of its barley yellow dwarf virus resistance, Gravity, and biscuitmaker Firefly.

He is also growing Kerrin and Insitor, along with new variety Dawsum, on his farm just north of  Stowmarket.

The aim was to drill the Saki between 15-20 September, as he likes to have all his wheat drilled up by the beginning of October.

He is impressed by the variety’s wide window of drilling and is happy to drill it from mid-September through to early December.

The variety was slow in coming through the ground in the cold and wet autumn of 2020, but it developed well through the winter and tillered out very well.

“The variety has been dependable in two poor years for establishing crops in the autumn,“ he says.

In his high-input high-output system he spends a relatively hefty £125/ha on fungicides, but this is seen as an insurance for getting a good seed crop for his customers.

“The Saki was pretty clean in a low disease year, and it was one variety I didn’t have to look at all the time,” he says. 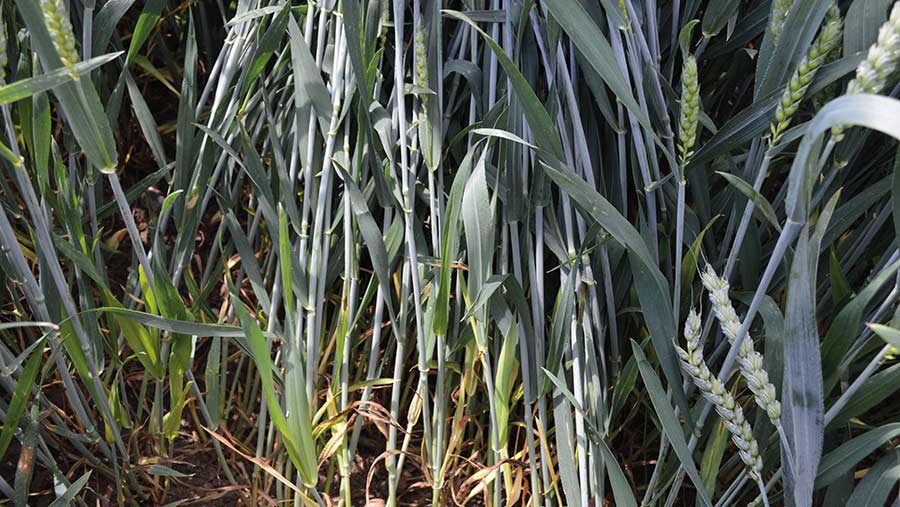 Saki scores 6.5 for all important septoria resistance against Skyscraper’s 5.1, while both show 8 for yellow rust in a 1-9 scale where 1 is very susceptible and 9 shows good resistance.

The variety is three days later to mature than Skyscraper, making it the latest to harvest on the Recommended List.

Mr Pulham sees this as an advantage in Suffolk as the longer the variety is in the ground the higher the yield. However, this lateness may limit its appeal to northern growers.

He likes the short stiff straw of Saki as he uses 220kg/ha of nitrogen fertiliser and lots of chicken and cattle manure on his fertile soils to give good yields.

Both Saki and Skyscraper have lodging scores of 7, just behind the stiffer Skyfall and Firefly on 8.

Mr Pulham is growing the seed crop for grain trading group Cofco and Michael Tew, grain trader and agronomist at the company, is also keen on the variety.

“Saki offers a great spread of opportunities for growers as it performs well on light or heavy land and for early or late drillings,” he says.

Some winter wheat varieties with the older variety Cougar in their parentage have seen an increased level of septoria this season.

A slightly more orange strain of the disease has appeared in varieties which have Cougar in their parentage, such as Saki and Firefly.

Bill Clark, technical director at crop consultant Niab, says these new strains can be controlled but cautions growers may have to spend more on their fungicide programmes.

This Cougar septoria isolate effect has been seen only in some varieties, such as Saki and  Firefly, and has not been confirmed in others with Cougar in their parentage such as Quasar, Astronomer, Illuminate, Swallow, Prince, and Merit.