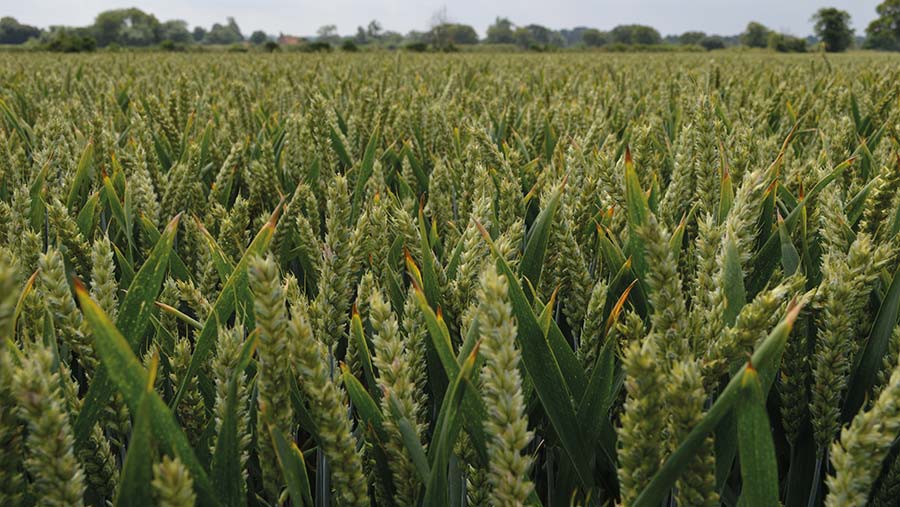 Norfolk grower Kit Papworth is able to drill the virus-resistant winter wheat Wolverine early in September and it has been his top-yielding variety for the past two seasons.

Wolverine marks a genetic breakthrough in being resistant to barley yellow dwarf virus (BYDV), meaning that delayed drilling and autumn insecticides are not needed to control the aphid-spread virus, which can cut yields by up to 50%.

He grows 500ha of winter wheat and drilling this variety in the first week of September with no follow-up insecticide sprays is a clear plus point in a busy autumn season on his farm.

“We can drill the variety directly into oilseed rape stubbles and then get on with other jobs, like lifting potatoes and sugar beet,” he says.

See also: Why demand is expected to be strong for virus-resistant wheat

The ability to drill the variety early has led it to being his top yielder on the farm. Last year some 50ha of the variety yielded 9.74t/ha on his light sandy loams, and so he pushed the Wolverine area up to 100ha for 2021 harvest.

“The key is that we don’t have to put on insecticides, so we are reducing the reliance on chemicals and using the variety’s genetic potential,” he adds. 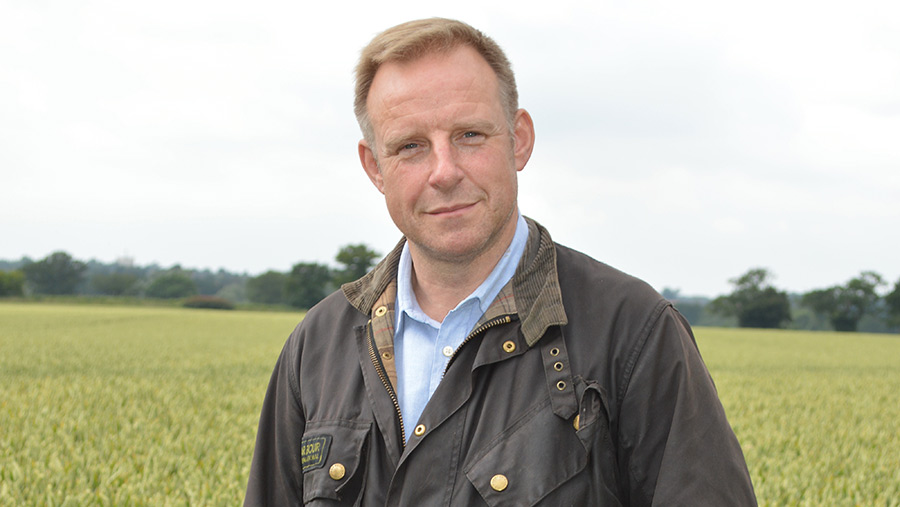 Mr Papworth is keen on early drilling on his blackgrass-free light land, as the autumn of 2020 was even wetter than the very wet 2019 and disrupted his traditional winter wheat drilling period, pushing it from late September into November.

“We have the confidence to drill early to avoid the wet autumns and give protection from BYDV,” he adds.

He has not seen any BYDV in Wolverine in his three seasons of growing the variety, while about 30-40% of his other wheats receive one pyrethroid insecticide in the autumn, and sometimes two, to control virus-carrying aphids.

His farming operation is based at Lodge Farm, Felmingham, near North Walsham, north of Norwich, and being only eight miles from the sea the area has long mild autumns, which can be favourable for aphids.

Therefore, as BYDV can be a problem on the farm, he believes Wolverine is a very valuable genetic breakthrough that will help reduce the impact of insecticides on the environment.

He farms 1,600ha of arable and environmental stewardship land with his cousin Tim – some owned and some contract farmed for 26 landowners, stretching from Dereham across to North Walsham and from Felmingham down to Norwich.

Wolverine is one of 14 varieties grown on the farm, with just over one-third of Mr Papworth’s 500ha of wheat down to seed production, growing varieties such as Skyscraper, Spotlight, Prince, Merit and Extase.

On the light sandy soils he farms, early drilling is desirable to get the crop off to a good start and set his wheat crops up well to cope with spring droughts, which will inevitably arrive in the following year.

Although Wolverine has been the top yielder on his farm, it is difficult to compare with other varieties that are drilled later from the third week in September into November, while a variety like Extase is often drilled late behind sugar beet.

Wolverine was included in the AHDB Recommended List late last year, and was a welcome introduction after seed treatments to control the aphids-carrying BYDV were banned, with growers only having pyrethroids sprays to rely upon for aphid control.

The once widely used neonicotinoid seed dressing clothianidin (Deter) was banned for use in cereals in December 2018, following a ban for use in oilseed rape in 2013 due to the insecticide’s perceived harmful effect on bees.

Although Wolverine does come with BYDV resistance, it only has moderate resistance to key wheat disease, such as septoria and yellow rust. It scores 5.3 for septoria and 5 for yellow rust on a 1-9 scale where 1 is very susceptible and 9 shows good resistance.

“We are very wary of yellow rust and septoria with Wolverine, so it needs a robust fungicide programme,” he says.

He can see septoria and yellow rust in areas of his crops not sprayed, and septoria is the biggest threat, especially without the once widely used multisite chlorothalonil fungicide, now banned.

With the threat from these two diseases and with only moderate resistance to mildew (6), Mr Papworth is looking to spend between £120/ha and £130/ha on fungicides for Wolverine.

His fungicide regime starts with the azole tebuconazole at T0 to control yellow rust, followed by a SDHI-azole at T1, and then he looks to build his fungicide programme around that strong start to the season.

As Wolverine can be susceptible to yellow rust and septoria, he grows the variety close to his farm’s base so he can keep an eye on it, while the more disease-resistant Extase can be grown further afield.

“However, for early drilling land it can give very high yields with a robust fungicide programme,” he concludes.

Wolverine, bred by RAGT, is the first winter wheat to offer BYDV resistance as it has the key Bdv2 resistance gene originating in goat grass and them translocated into wheat plants.

With neonicotinoid insecticide seed dressing now banned, the new variety gives wheat growers an environmentally friendly solution to BYDV control. This genetic alternative to insecticides has performed well in the field and has given season-long protection from the aphids that transmit the virus, says RAGT.

The breeder adds that aphids still arrive, but Wolverine doesn’t express any virus symptoms and the virus doesn’t multiply in the wheat plant. It points out that the BYDV resistant variety is well suited to early drilling.

A charge of £33/ha will be applied to the seed, which covers season-long protection and will eliminate the need to monitor aphids population or repeatedly spray in the autumn with pyrethroid insecticides at a busy time of the year, says RAGT.

For many farmers, growing Wolverine will be cheaper than spraying three or four times or using the previous combined seed dressing and spray approach, the group adds.

There is expected to be enough seed of Wolverine to meet demand for this autumn’s wheat drilling, and the breeder says the variety could take a significant market share.