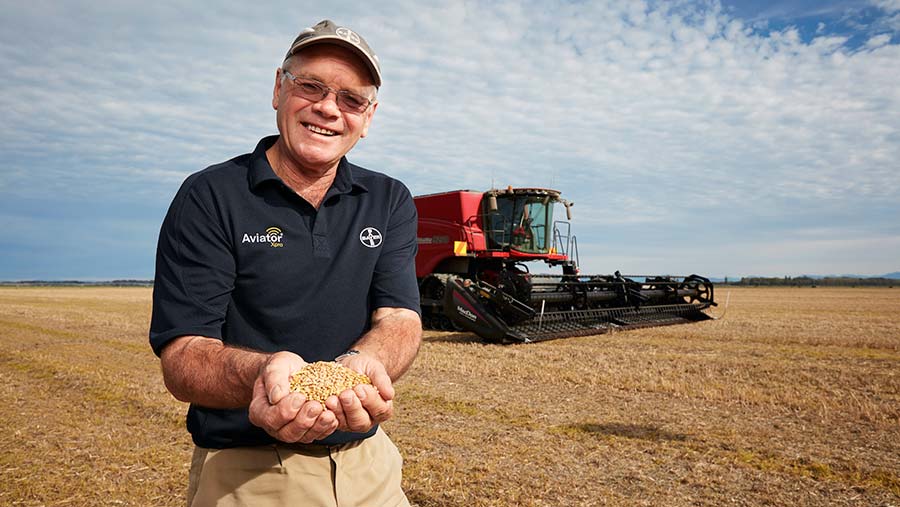 Eric Watson with a handful of his high-yielding wheat grain

High disease pressure and a susceptible variety is hardly the recipe for a record-beating wheat crop, but that’s exactly what New Zealand grower Eric Watson had to work with on his way to setting the new Guinness World Record yield of 16.8t/ha.

Farming at Wakanui on the Canterbury plain, about six miles from the east coast of New Zealand’s South Island, Mr Watson puts his blockbuster yield down to a first-rate seed-bed, a comprehensive spray strategy and top-rate plant nutrition.

The 11.9ha crop of Oakley winter wheat was drilled on 9 April with his Horsch Pronto, aiming to establish 110 plants/sq m into a min-tilled seed-bed.

“It went into ideal sowing conditions,” says Mr Watson, who had four plots surveyed and registered for record attempts during the southern hemisphere autumn of 2016.

This was to be his second attempt at smashing the the world record wheat yield, having last year fallen short of the 16.5t/ha record set by Northumberland’s Rod Smith in 2015.

A tebuconazole seed treatment was bolstered with Galmano (fluquinconazole), providing rust and mildew protection over winter, and the neonicotinoid Poncho (clothianidin) warding off autumn aphids.

“We’ve seen the effect of BYDV here in the past,” explains Mr Watson, who followed up with three aphicides over winter, and more in the first fungicide passes, alternating actives to minimise risk of resistance.

The first fungicide on this world record-breaking Oakley crop was a robust rate of epoxiconazole applied in late August, to clear up septoria and yellow and brown rust just ahead of the crop hitting growth stage 31.

This was followed by a T1, T2 and T3 spray programme, plus a T4 application a fortnight after flowering to maximise late grain-fill – something that is becoming increasingly common for irrigated crops in Canterbury.

A selection of three different azole fungicides was backed up with the protectant chemistry of folpet to give an alternative mode of action on septoria early on in the programme, with the SDHI-azole product Aviator Xpro used at T2 and T3.

At T3 and T4 a strobilurin spray was deployed to protect against brown rust and was also chosen for its greening effect. 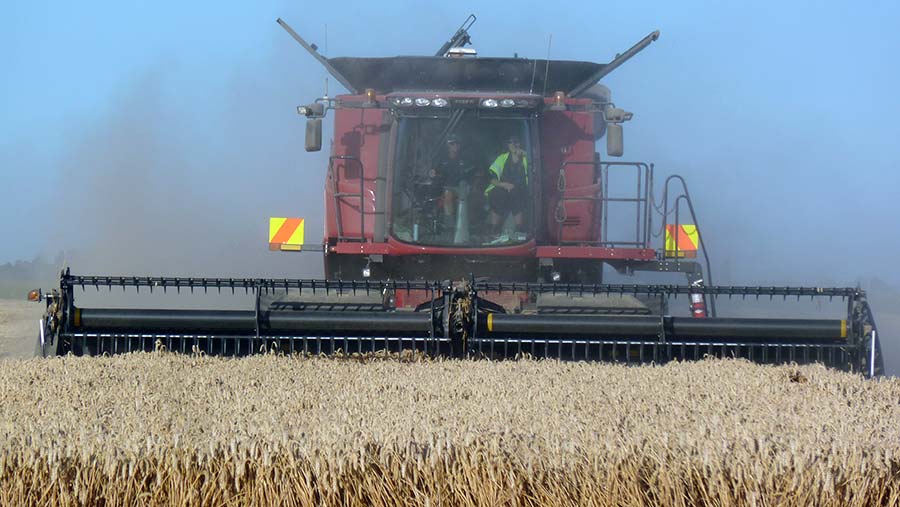 Crop nutrition kicked off with an autumn application of superphosphate followed by three passes with nitrogen and one potash in spring.

“We used potassium sulphate to get sulphur on as well and because the ballistics mean we can’t spread it accurately at 32m,” notes Mr Watson.

Variable rate lime, phosphate and potash on a couple of occasions applied over the previous six years meant soil fertility was already good and even across the field.

Soil tests showed an average of 100kg of residual nitrogen in the soil in late July, and 40-50kg of mineralised N available in September. Three passes applying a total of 258kg of fertiliser as solid urea followed, the final dose coming at the flag leaf stage.

“We worked on 22kg of N from the soil and fertiliser per tonne of grain expected and that’s exactly what it ended up at.”

Trace elements were applied based on tissue analysis results from Yara, including multi-mineral foliar spray and manganese and zinc-based formulations.

The wheat was irrigated twice, with a total of 50mm applied, which Mr Watson says is less than an average crop would see.

“In a dry season we put 200 to 250mm on,” says Mr Watson, who uses neutron-probe soil moisture sensors to schedule irrigation on his mostly silty loam over clay soils.

“It’s good to have the record back in New Zealand again,” said Mr Watson, reflecting on the record’s recent history.

“It’s a huge task to register the crop and do everything required for a record attempt and credit to Bayer Crop Science and Yara for helping us with all that,” he added.

The world record isn’t the only trophy in the Watson family’s cabinet. They have won numerous farming awards over the years, including Lincoln University’s “South Island Farmer of the Year” award and the Canterbury Ballance Farm Environment Awards’ Supreme title.