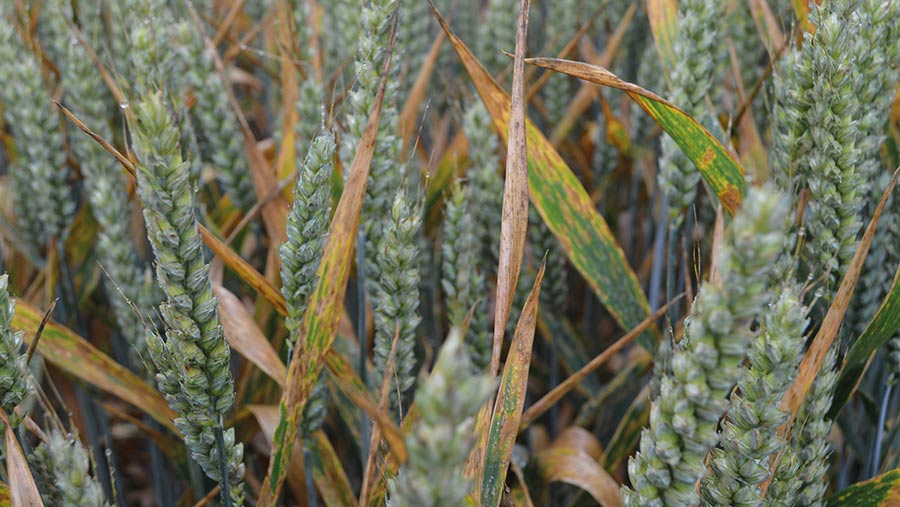 Winter wheat crops are showing generally low levels of disease in the current cold and dry spring, but a change to warmer wetter weather could see infection levels increase ahead of the key T1 fungicide application timing.

In the first of a two-part series, we ask one independent disease expert and five agronomists from around Britain on their strategies for T1 sprays which are due to be applied at the end of April.

See also: Tips on how to keep wheat fungicide costs under control

Agronomists believe T1 wheat fungicides usually applied in late April are likely to include an SDHI component to bolster disease control as the once widely used chlorothalonil is now unavailable.

“Without chlorothalonil, there is likely to be greater use of an SDHI-azole at T1. Assuming rain between now and T1, the disease risk will increase and septoria is already at the base of crops ready to be splashed upwards by rain,” he says.

Mr Blake reports that yellow rust has become more active over the past few weeks, while septoria is easily seen on the lower leaves, especially in early-sown crops.

For wheat growers, the early T0 spray timing in late March/early April is becoming more about rust control than septoria with no chlorothalonil – which gave a cheap protective control of septoria in the early spring.

Crops which have yellow rust are likely to have been treated at the T0 stage with a straight azole, such as tebuconazole, or a strobilurin, while septoria is not cycling quickly at the moment, given the dry and cool weather.

But if the weather does change and growers see more rain, then a T1 approach of an SDHI-azole-multisite may be the best route. Without the multisite chlorothalonil, Mr Blake suggests using folpet or mancozeb.

For growers with late-sown crops and good variety disease resistance, he says an azole, such as prothioconazole or metconazole, plus a multisite could be an option, but he adds that neither azole will be as septoria active as an SDHI-azole combination.

The T1 spray tends to be focused primarily on septoria control while ensuring rust susceptible varieties are kept clean, so good septoria chemistry is needed at this stage.

Further ahead, he sees the introduction of fenpicoxamid (Inatreq) as a “huge step forward” in disease control and resistance management, as it has a different site of action to other systemic fungicides such as SDHIs and azoles.

Fenpicoxamid in combination with azole prothioconazole is being introduced for T2 applications after being cleared by UK authorities in March. The manufacturer Corteva will market the product as Univoq.

As the T1 spray timing nears for winter wheat, we ask five agronomists from around Britain to describe the disease situation in their areas and what their thinking is on fungicide strategies.

Scottish wheat growers may be inclined to use more robust T1 fungicide sprays, as many have missed out or used a fairly inexpensive earlier T0 treatment.

Andrew Gilchrist, director at independent adviser Scottish Agronomy, says the majority of his growers have not used a T0, as yellow rust is largely confined to coastal areas and septoria has generally dried up in the current dry and windy weather.

Any wheat crops showing yellow rust in susceptible areas like the coast of Angus, Fife and East Lothian have been treated with an azole such as tebuconazole at T0, while there is little substantial that growers can do to control septoria at T0 with the banning of chlorothalonil.

The best fungicide at T1 in Scottish Agronomy trials has been the SDHI fluxapyroxad + azole mefentrifluconazole combination, especially on septoria-susceptible varieties like Barrel, while Scotland’s most popular wheat variety Skyscraper has not been fully tested in a bad disease year.

Most of Mr Gilchrist’s clients’ wheat crops are likely to get this SDHI-azole approach at T1, which is likely to occur in late April/early May, with the multisite folpet added for its protective action against septoria.

For those wheat varieties with good septoria resistance, such as Sundance and Extase, the older SDHI boscalid is likely to be used along with folpet and a low dose of azole prothioconazole, with the SDHI aimed mainly at eyespot.

Last season, given the dry spring and subsequent low disease levels, these two varieties were grown with only two fungicides used – a relatively cheap T1 and a more comprehensive “bridging” one covering the T2 and T3 timings.

Agronomist David Stead is seeing a clear divide in winter wheat crops in Yorkshire between those drilled in September with disease visible, and those sown from November onwards which are relatively clean.

Early T0 sprays have been dictated by the amount of yellow rust, and those susceptible varieties with rust visible have been treated with the azole tebuconazole.

For those crops which missed out on a T0, he is likely to be recommending an SDHI-azole-folpet approach, whereas for those that had a T0, there will be more flexibility.

While the weather is cold and dry, crops look good and disease levels generally low, and those that missed a T0 spray may use a more robust T1.

“With some warmth and some rain, the septoria risk increases, and those that missed a T0 may need to spend a bit more at T1,” says Mr Stead, who is Yorkshire area business manager for advisory group Hutchinsons.

For those that have applied a T0, or with a variety with good septoria resistance such as Extase, they may have a bit more flexibility. They may be able to save on an SDHI and use an azole-strobilurin-multisite approach.

Much will depend on the weather leading up to T1, while Mr Stead also watches out for eyespot which may be more prevalent following a wet winter and a dry spring.

John Vickery is seeing generally low disease levels in wheat crops and believes money saved on any missed T0s could be well spent on a beefed-up T1.

His area, centred on Gloucestershire, is seeing patches of yellow rust in susceptible varieties, and low levels of septoria on the newest wheat leaves.

Where varieties with good disease resistance, such as Extase, are being grown on the Cotswolds – where yields can be limited by the soil type – growers could have saved about £10/ha by missing out a T0 spray.

His approach is not to overspend early in the season as rain later can bring in septoria, and many have based their T0s on whether there is yellow rust in the crop rather than focusing on septoria.

“For those who missed a T0, there might be more willingness to spend a bit more on T1s, especially once we get some rain and see the true yield potential,” says Mr Vickery, who is regional technical adviser for agronomy group Agrii.

He says the money saved by not using the now-banned chlorothalonil could be utilised on increasing rates of new chemistry with a T1 based around an SDHI-azole approach.

Mr VIckery says the T1 treatment is a difficult timing, as so much depends on the weather leading up to the spray application and then beyond until the flag leaf T2 timing with rain always likely to herald higher septoria levels. 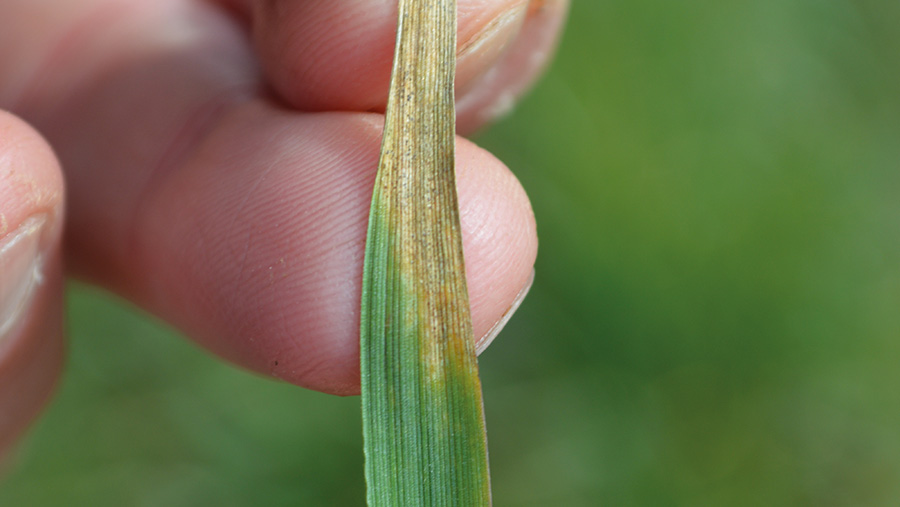 Buoyant wheat prices might encourage growers to spend a little more on a robust T1 spray, especially where T0s have been missed due to the dry and cold weather.

Mike Thornton, who looks after crops in Sussex, says early septoria and yellow rust levels have dried up with the cold and windy weather, but can quickly return with some warm rain.

Early-drilled crops of the variety Skyfall are showing septoria and yellow rust, and Zyatt some yellow rust, while septoria is always a threat in coastal areas, with sea mists encouraging the wet-weather disease.

“I see this as a two-SDHI season, as once we get a bit of rain we will see more persistent rust and septoria,” says Mr Thornton, who is head of crop production at agronomy group ProCam.

For those who have missed a T0 spray or gone with tebuconazole to control yellow rust, then there is a little more leeway for T1, especially with harvest feed wheat prices at over £160/t.

His approach at T1 would be an SHDI-azole-folpet programme, especially on early-drilled crops in areas at risk of disease, such as near the coast or in river valleys, and he is more likely to use folpet early in the season to help protect other actives.

“Disease is still here, and once the weather warms up and rain arrives we could see levels rising,” he says.

Christine Lilly estimates that about three-quarters of the wheat crop in Lincolnshire have seen a T0 spray, and those are likely to have been largely tebuconazole based to control yellow rust.

The decision on T1 will depend as usual on varieties and drilling dates, and she points out that what happens weather-wise after a T1 is applied is very important, as if May turns wet then septoria levels will increase.

Wheat crops generally look good in her area with the dry weather slowing down the development of septoria even on the more susceptible wheat varieties like Barrel.

“For those who did not use a T0, then there could be a bit extra to spend at T1 to make it a robust treatment,” says Mrs Lilly, who is technical support manager at agronomy group Frontier.

She is concerned over the rust susceptibility of wheat varieties such as Kinetic, Gleam, Kerrin and Zyatt, while even Extase has seen rust come in late in the season.

Mrs Lilly believes many T1s will be SDHI-azole-folpet based, with folpet seen as a good protective multisite fungicide, although not as good as the banned chlorothalonil.

Inatreq will be an option later in the season with some of this new fungicide available for the T2 timing, and she describes the new active which will be sold with azole prothioconazole as being very strong on septoria, and has given good result in her group’s trials.

Azole tebuconazole – Folicur and other brands

Multisite folpet – Arizona and other brands