Two Oxfordshire wheat growers are planning their fungicide programmes for this spring after being impressed with a new flag leaf product which they trialled last season.

With the main disease threat to their wheat crops being septoria, they are both interested in trying new SDHI-azole products available this season if disease pressure turns out to be high. 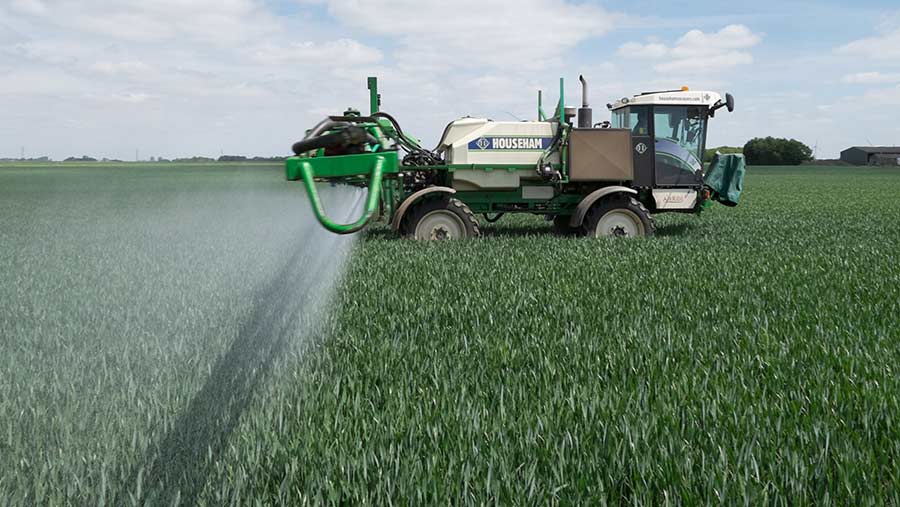 However, rising costs and disease resistance to fungicide are big issues, so both will be thinking hard about using one or two SDHIs to save some costs and also help protect these valuable fungicides.

Both will be monitoring weather conditions over the next couple of months to assess whether the wet-loving septoria will be a big threat to their crops and what kind of fungicide strategy they will follow. 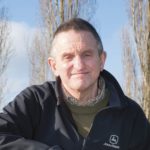 Disease pressure and product pricing will be key in Simon Beddows’ fungicide strategy, as he aims to keep costs down and winter wheat yields up this season.

Managing 1,000ha in south Oxfordshire, he has seen little sign of disease yet this spring, while he is avoiding growing wheat varieties that cost a lot of money.

For this season, the disease-susceptible variety Solstice is out and replaced by the newer Illustrious in an attempt to keep a ceiling of £100/ha on fungicide spending.

All might change if wet weather heralds a rapid spread of septoria, so he is prepared to use some of the newer fungicides after an encouraging trial last season with a new twin-SDHI product.

Fungicide regime for Solstice in 2016 at Dunsden Green Farm

“We are hoping to keep fungicide spend below £100/ha and we have selected more resistant varieties to help with this aim,” Mr Beddows tells Farmers Weekly.

Septoria is the main disease threat to the 300ha of milling wheat he grows on land stretching from fertile loams bordering the river Thames to gravel soils on the edge of the Chiltern Hills. However, yellow and brown rust can still be a problem.

Humid weather can encourage the wet-loving septoria, while the lack of moisture in his light soils is a major yield-limiting factor, especially in a dry summer.

Milling wheats are chosen at Dunsden Green Farm, close to the north-east edge of Reading, as the soils are not fertile enough to chase high yields of feed wheat. This seasonMr Beddows’ area is dominated by Skyfall and Crusoe, with a little Illustrious.

Last season, he trialled the new twin-SDHI plus azole product Ascra from Bayer at the flag leaf stage on the disease-susceptible Solstice and compared it with existing products.

A 2ha strip through one of his fields was treated with Ascra at the flag leaf T2 stage. This yielded 9.7t/ha compared with a T2 strip treated with Adexar at 9.27t/ha. Both sprays included the multisite fungicide chlorothalonil.

The extra 0.43t/ha yield, worth about £60/ha at current milling wheat prices, was pleasing enough for Mr Beddows to plan to use it again if this season turns out to have high disease pressure.

Both these SDHI-azole products did a very good job at controlling disease, and both gave similar grain samples, so the yield increase must have come from an increase in grain numbers.

“We could not pick out any differences in the field, so the extra yield must have come from a greening effect,” he says.

The Solstice cost about £100/ha for fungicides compared with £90/ha for his other varieties, so Solstice is out this season as his focus is on growing costs.

He is hoping to use just one SDHI this season, timed at T2. He plans to omit one at T1 to help protect the efficacy of the SDHIs after some septoria isolates in the UK have been found to be resistant to this group of fungicides.

For this season,Mr Beddows will aim to use just chorothalonil at T0, and only add a strobilurin for Crusoe to cover for the variety’s weakness to brown rust.

If the wheat continues to look well he will use an azole-chlorothalonil mix at T1, but if conditions turn wet he may have to revert to an SDHI-azole product such as Aviator.

“We have to be aware of how often we are using SDHIs and try to build up an anti-resistance strategy,” he says.

“We will definitely be using Ascra and Elatus in trial areas to compare the two and to also compare them with Adexar,” he says. 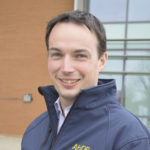 Flexibility is key to James Price’s fungicide strategy to manage wheat on his Cotswold brash soils, which can dry out quickly in the summer.

Good rainfall last May and June led to impressive yields for his milling wheats, but his wheats are already showing signs of being short of water in early March after a dry winter.

“Being flexible is key to being able to react to disease pressure, and we have the advantage of being able to get around the wheat in one day,” he says.

Yields of his 200ha of milling varieties Skyfall and Cordiale averaged an impressive 9.3t/ha in 2016, but a dry summer spell can cut yields and lead to changes in fungicide inputs. 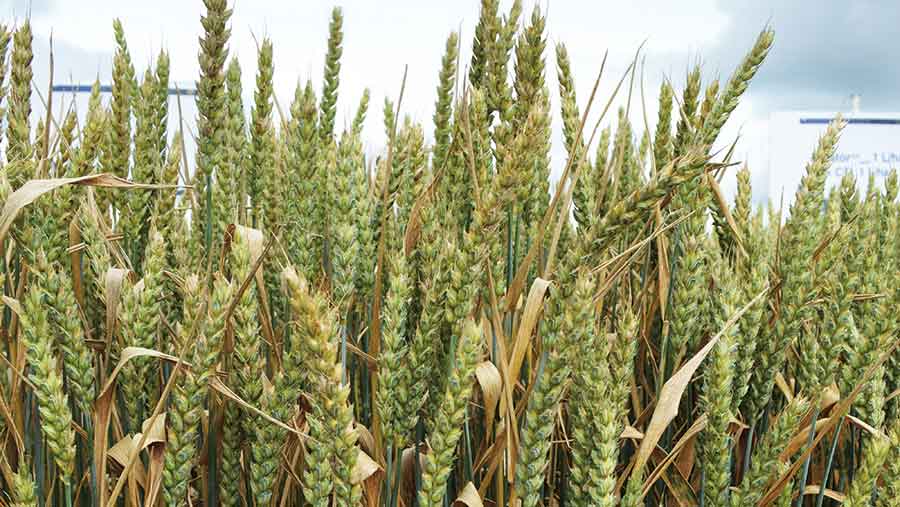 Septoria is again the main disease threat, and SDHIs were used for the first time last season at the T1 stage. Overall fungicide costs were kept to a relatively modest £90/ha.

Mr Price is not seeing septoria or rusts in his crops this spring, but he can react quickly, helped by his membership of a buying group for inputs and the increased range of products available for this spring.

Last season he, like Mr Beddows, tried the product Ascra at the T2 flag leaf stage and saw a near 0.3t/ha yield advantage, worth about £40-£50/ha in extra grain.

In a field of Cordiale, a strip that was treated with Ascra yielded 10.31t/ha compared with one using SDHI-azole product Librax at 10.05t/ha, on his 640ha of arable land at Perdiswell Farm, Woodstock, just north-west of Oxford.

“We have seen this effect in one year, so we will have to try it again this season,” he says.

Fungicide regime for Cordiale wheat in 2016 at Perdiswell Farm

Like Mr Beddows, Mr Price could see no difference in disease control from the two T2 products, so he puts the yield advantage down to a greening effect on the plants.

For this season, he plans a T0 of chlorothalonil with an azole added where needed. The programme at T1 and T2 will depend on the disease threat – primarily from septoria.

He is set to try Ascra again, along with the other new SHDI-azole Elatus, while also using other major products such as Aviator, Adexar and Librax

‘Judge for yourself’ programme

Last season, Bayer offered 42 growers a limited amount of its new product, Ascra, to use at the flag leaf T2 stage on winter wheat as part of its “Judge for yourself” programme.

On average, Ascra gave a yield increase of 0.3t/ha compared with the growers’ own T2 standards, with 70% of growers using the product seeing an increase in yield.

The new product adds the SDHI fluopyram, which is used in the group’s oilseed rape product Propulse, to its existing SDHI-azole Aviator. For this season, the product will be widely available and priced at a premium to Aviator.