Once known as the breadbasket of Europe, grain production in Ukraine faltered following the collapse of the Soviet Union in the 1990s.

But this once sleeping giant of a country has since woken up and long-term grain output is on an upward curve – with ramifications for British growers.

Tariff-free imports of Ukrainian wheat, barley and maize into the European Union are set to increase, this will have major implications for UK growers, especially if Brexit sees the UK leave the EU single market (see “EU quota deal increases tariff-free imports from Ukraine” at the bottom of this article).

Cereal grower Lawrence Richmond has been farming in the Ukraine for four years.

Originally from Australia, he was running an arable and livestock holding in Victoria when he was invited to Ukraine by a grain trader who had an underperforming farm that needed a manager. 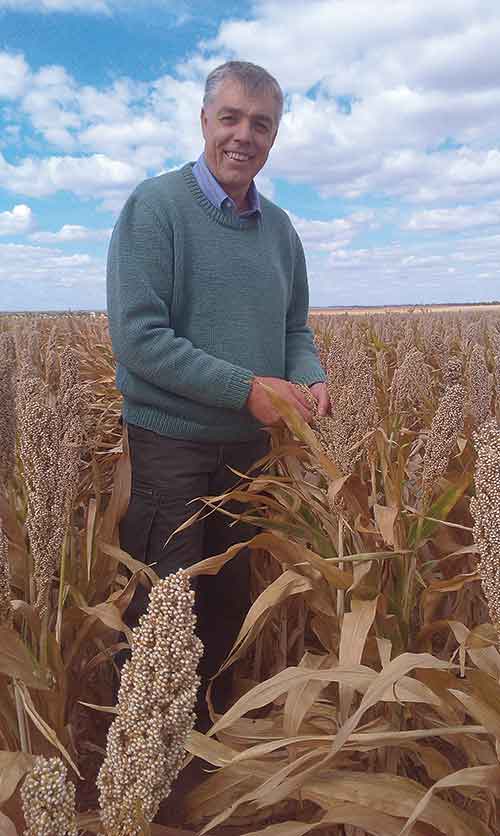 The business is now farming 6,000ha. Mr Richmond says that while there are lots of challenges, there are also many opportunities.

The challenges include grain theft, which is a real threat in the Black Sea region – a place where money is tight and one tonne of wheat can be worth more than one month’s wages.

Mr Richmond employs armed guards when he transports wheat off the farm after harvest.

If someone sold a tonne of grain on the black market, they could double their income.

There are other challenges too. Rules and regulations can change overnight.

Last month, when Mr Richmond was moving between farms to plant winter wheat, he was stopped by the police, who refused to let him down the road because his seed drill was too big.

“But the first we knew about it was when the police stopped us. It makes life difficult when you’ve got a seed drill that is 5m wide folded.”

The drill was eventually moved under cover of darkness. “We had to turn around and park the machinery up the road a bit,” says Mr Richmond. “Then we did a 4am stealth run when the police weren’t there.” 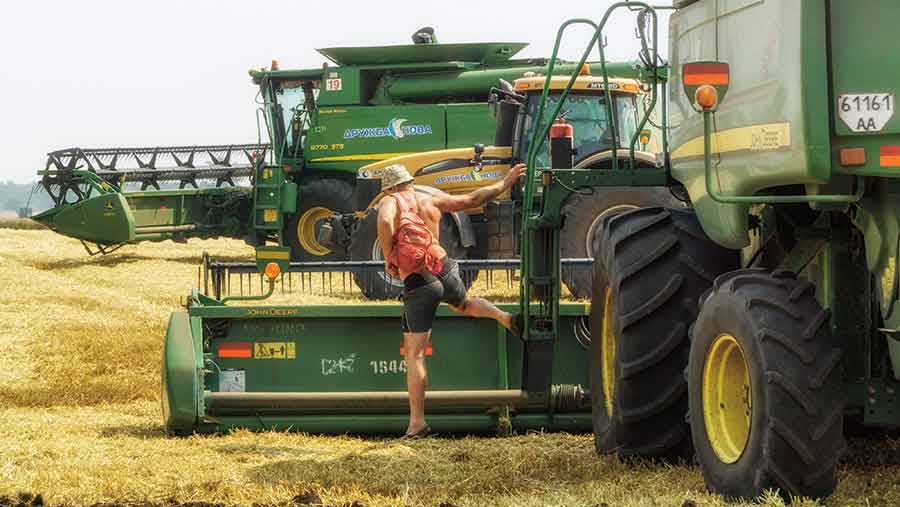 As well as wheat, the main crops grown are barley, oilseed rape and sunflowers. Target wheat yields are 3-4t/ha – less than half those typically seen in the UK. But the crop remains profitable because of the economies of scale and low input costs.

Compared to the UK, land is cheap, and the system of tenure is different too. Farmers are expected to pay a flat fee of about $250/ha (£203/ha) for the right to lease land for seven years. In addition, they pay an annual rent of about $75/ha (£60/ha).

Ukraine has some 40m hectares of arable land – much of it high quality. And farming is increasingly big business.

Agriculture’s share of total GDP is expected to rise by 3.3% this year, while manufacturing will decline by 7%, according to the Economist Intelligence Unit.

With rainfall the limiting factor, Mr Richmond has a target wheat yield of 16kg per millimetre of available rainfall, rather than measuring output in t/ha.

An advocate of “dry land farming”, his whole approach to agriculture is about water conservation. And it is paying off.

“At the end of the day, there is money to be made,” says Mr Richmond, who farms between Nicolaev in southern Ukraine and the Black Sea port of Odessa, on behalf of a Singaporean investor.

“We are growing for the world market and it costs us one tonne of wheat to make two tonnes profit. We are close to the Black Sea ports, and once we get a load of wheat on a boat, we can ship it anywhere in the world at very little extra cost.”

Mr Lee has worked in Ukraine for seven years, moving to the country to farm full time before political turmoil in 2014 forced him to relocate his family to Kursk in central Russia.

Now working in Ukraine as a freelance consultant, Mr Lee’s main focus today is travelling through the Black Sea region to assess the yield potential of wheat, maize, soya and sunflowers throughout the growing season.

The aim is to examine crop conditions and then translate that data into likely harvest output.

These forecasts, which are updated throughout the year, are then used by commodity traders, marketing groups and farmers to predict what the yield out of the region may be ahead of harvest.

“As far as we know, we are the only independent group doing this,” says Mr Lee, who travels some 15,000km every year looking at crops.

“It is an honest evaluation from someone who has spent a number of years farming in the region and doing their own agronomy.”

Mr Lee started his pre-winter assessment of crops this month. Forecasting yields per hectare is surprisingly accurate, he says.

But it is harder to predict how many hectares will be harvested because official cropping figures from the Ukraine government can be unreliable.

“If you identify a pest or a disease in a crop in the UK, you can draw on a multitude of data to come upwith a suitable response, but in Ukraine I would literally sit in a field, look at an insect and try to assess what damage it was causing and whether it was worth spraying for them.”

“Ukraine is a different country than it was in the 1990s, when everything was all a bit crazy. It is much more structured and the risks involved are not as great as people think.”

The ability of the country to farm has improved immeasurably over the past decade, adds Mr Lee. So too has its export potential.

“I spend a ridiculous amount of time driving through Ukraine and the quality of the crops over the past five years shows they are getting better at it.”

Most Ukrainian farmers rely on domestic varieties. But yields could be improved rapidly by introducing new genetics and imported wheat varieties, says Mr Lee. “If that happened, you would see an uplift in genetics very quickly,” he adds.

“There is still a lot of land available at a competitive price, and a lot of it is prime arable land. If you go around the world searching for somewhere to invest in a large-scale farming enterprise, you will invariably end up back in Ukraine.” 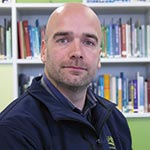 An average global wheat yield of 3.35t/ha expected in 2016-17 may seem low to UK growers used to getting nearer 10t/ha, but world wheat output is more than capable of keeping up with demand, and Ukraine is among the big players.

Average annual wheat production in Ukraine has increased by 7% over the past three years, according to AHDB Cereals and Oilseeds. And the country has more to give at a time when UK growers have seen yields plateau for two decades.

Imports of grain from Ukraine into the EU have already increased by 5% since an agreement to grant a tariff-free quota covering 1.6m tonnes of soft wheat, barley and maize came into effect on 1 January this year. Now that figure is set to increase even more.

EU plans to allow an extra 1.1m tonnes of tariff-free feed grain into the EU from the Ukraine will intensify competition at a time when UK growers could face market restrictions because of Brexit, says Jack Watts, lead analyst at AHDB Cereals and Oilseeds.

“The next few years will be critical for the UK cereals and oilseeds industry to build competitiveness, find new sources of resilience, strengthen customer relationships and prepare for some unknowns,” he told last month’s AHDB Grain Market Outlook conference in London.