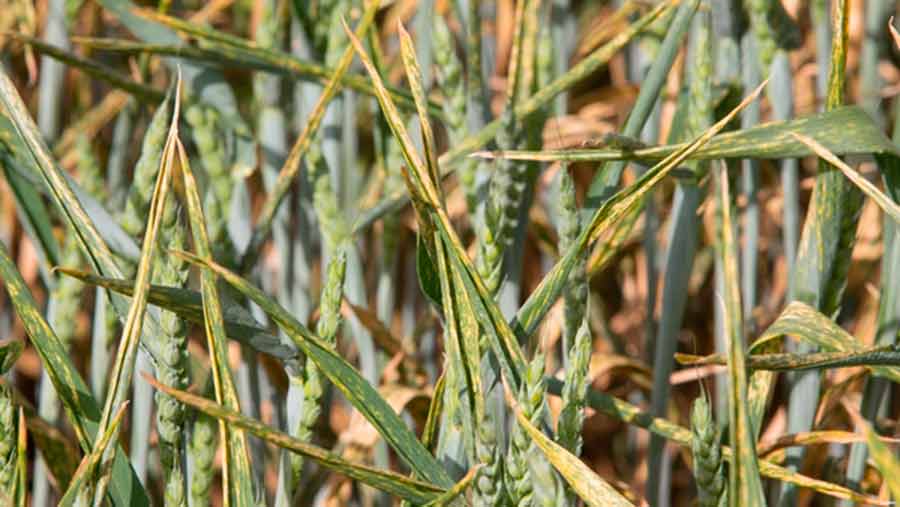 Yellow rust has developed on some wheat varieties in this cool and damp spring – perfect conditions for disease spread – and growers need to monitor crops and treat on detection.

Growers and agronomists have reported yellow rust in a number of wheat varieties with moderate to high resistance scores including Skyfall (6), Evolution (9), Lili (7) and Belgrade (7).

However, by far the worst effected is Reflection (6), with sources reporting high levels not only in the East where the disease tends to be more of a problem, but also in the West.

In situations where the variety has been grown in similar situations to susceptible varieties such as Kielder (3), it has been carrying noticeably higher infection, according to Farmers Weekly sources.

This has led some to question if there has been a race change in the UK yellow rust population, but Niab’s Sarah Holdgate, who is responsible for the UK cereal pathogen virulence survey (UKCPVS), says it is too early to say.

“We picked up a couple of variations [in races] last year, which did make us slightly concerned, but we will only see if these are significant later on this season,” she says.

Dr Holdgate says that UKCPVS has received 81 samples from the field so far this spring – about double that of a typical season – betraying the high background yellow rust pressure.

However, samples that have been received so far are from varieties known to be susceptible to the disease at the seedling stage, thus raising no alarm bells for later in the season.

High-rated varieties will be soon reach the reproductive stage, typically the point when adult yellow rust resistance kicks in and infection is shaken off as the upper canopy emerges.

“It is what happens when we get into the main yellow rust period in June that matters. As those top leaves build yield they are the ones to start looking at for signs of infection,” explains Dr Holdgate.

If no dramatic race change has occurred, those growers with 7s, 8s and 9s in the ground may be able to rest easier in the knowledge that adult resistance will kick in, but there remains a concern about the disease in Reflection this season.

The high-yielding wheat topped the Recommended List for yield in 2015-16 and a large area was drilled this season, exposing it to a wider range of situations and higher yellow rust pressure and is now a hot topic among growers and advisers alike.

Syngenta’s seed and seed care manager Mark Bullen accepts that Reflection has been infected by yellow rust this season, but where good T0s were applied, he says they look clean.

He adds that in previous years is has shown susceptibility at the seedling stage, but hasn’t developed into a problem when the variety reaches adult growth stages.

With lower levels of rust in Kielder and Santiago this season, Mr Bullen suspects a possible race change may have occurred in the volatile Warrior race group, but testing won’t give a definitive answer until early 2017.

“Reflection currently has a six rating based on five years of trials data, but that is obviously subject to change as new information is gathered.

“There are those saying that the six isn’t right, but that’s what it has got and it’s been independently verified [in AHDB trials],” he says.

Mr Bullen adds that the variety has huge yield potential and with a correct and well-timed fungicide programme to keep upper leaves clean, it can still provide growers with plenty of grain.

“We still have confidence in the variety going forward and will be marketing it next year. We have always said that you need a good fungicide programme to maximise yield,” he says.

Lincolnshire AICC agronomist Sean Sparling says it was almost inevitable that the variety developed a rust problem from a parentage of Oakley x Denman, which have yellow rust scores of 2 and 4, respectively.

“It is reminiscent of Oakley, where you treat the yellow rust with a fungicide and afterwards you don’t see any pustules, but where you had latent disease it still expresses itself as yellow spots.

“A couple of weeks after T1, you can certainly see which fields are Reflection as you drive around the county,” he says.

Mr Sparling notes that even after a strobilurin-chlorothalonil T0 in some of his Reflection crops, plants had been recolonised by yellow rust within three weeks of treatment.

“You are going to have to accept that you need to be robust with it. Don’t skimp on triazoles or strobilurins, or it may turn around and bite you on the backside later if you don’t keep on top of it,” he adds.

Yellow rust favours cool and wet conditions with temperatures of about 10-15C, so a spell of warm, dry weather with mercury hitting 20-22C can check an epidemic.

The forecast switch to 20C plus conditions will be welcome news this week, but Adas plant pathologist Jonathan Blake cautions that the disease could still remain active to about 25C, helped along by morning dews.

He says where there could be a yellow rust problem – such as in Reflection – an additional timing between T1 and T2 would be more effective to protect upper leaves from infection.

“The danger this season is where T1s might have gone on a little early, we may see a four-week gap between sprays and rust is likely to return to the crop before T2s are applied,” explains Mr Blake.

This spray should be an azole – with epoxiconazole followed by tebuconazole the most effective – or a strobilurin such as pyraclostrobin, azoxystrobin or picoxystrobin.

“Where rust is active at that extra timing, chorothalonil has been seen to reduce efficacy of other actives on rust, so it you could leave it out,” says Mr Blake.

Mr Sparling also accepts that there might be a need for extra sprays on Reflection and he urges growers to forget about the four-week interval model that many fungicide programmes stick to.

“The aim is to keep the flag leaf clean and if that means going every two weeks, so be it,” he adds.

Strobilurins were added into his T1 sprays and will also feature in flag leaf sprays, particularly where prothioconazole-bixafen mixture Aviator is being used.

Despite being a good yellow rust protectant, prothioconazole doesn’t have the eradicant activity of other azoles, he explains, so should be beefed up with some extra rust activity.

Yellow rust can also get in the ear later on and cause considerable damage, so a tebuconazole ear wash may also need to be factored into the programme on the variety if conditions remain favourable for the disease.

“You have to consider cost, but the cost pales into insignificance compared with the consequences of not controlling the yellow rust, so I would spend now and assess cost at the end of the season.

“Reflection may be a big yielder, that’s fine, but if it was me buying the seed I certainly wouldn’t be ordering it again next year. It’s a worry we just don’t want.

“With Oakley parentage, it was always going to be a non-starter,” he says.