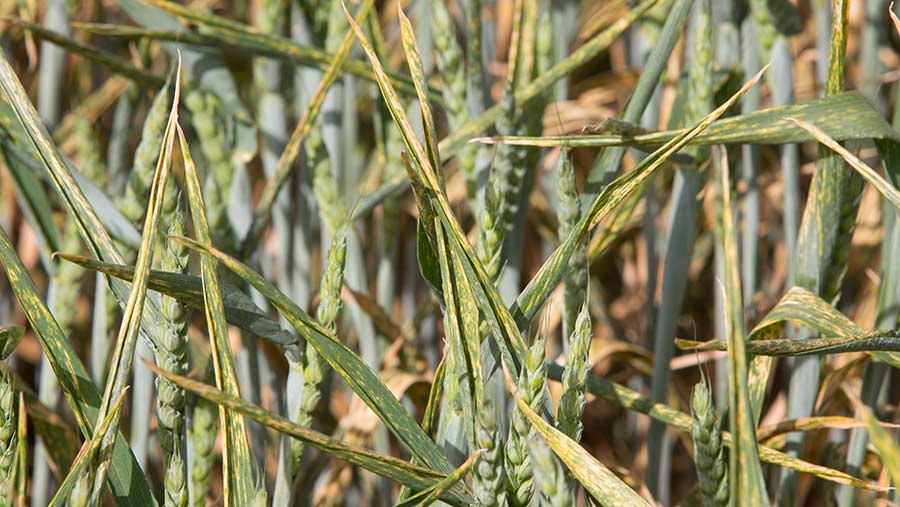 The yellow rust resistance rating of some major wheat varieties, such as Reflection and Diego, are being cut sharply after new races of the disease have been discovered.

Seven winter wheat varieties saw a drop of two points or more in their yellow rust ratings, with Reflection downgraded to 3 from 6 on the AHDB scale, where 9 is good resistance and 1 is very susceptible.

Biscuit-making wheats Britannia and Zulu and feed wheat Myriad all fell four points to ratings of 4, 5 and 4, respectively.

Reflection saw the next biggest drop, down three points, while biscuit wheats Spyder and Conversion, and old feed wheat favourite Diego were all down two points, slipping from 7 to 5.

All these changes are to be included in the 2017-18 AHDB Recommended Lists of cereals and oilseeds, due to be published in late November. The changes are largely for feed and biscuit wheats plus the milling variety Cordiale.

Major changes in varietal resistance were seen in the field last season, so the new disease rating are being based just on 2016 data rather than three years of data as in the past.

A new “Kranich” race has been confirmed by the AHDB-funded UK Cereal Pathogen Virulence Survey, and a potential new race – provisionally named Invicta – has also been found.

Jenna Watts, who manages disease research at the AHDB, says the aim is to make sure the Recommended Lists reflect varietal performance in the field. She says a change of more than one point is highly unusual.

“We made the decision to calculate the disease ratings on a single year’s trials because the 2016 yellow rust assessment data was so different to what had been seen before,” says Dr Watts.

Of the 32 recommended wheat varieties in trial, 15 varieties showed unchanged ratings, while 14 varieties have strong resistance rating of 8 or 9.

Only one variety, the feed wheat Viscount, saw an increase in its rating, moving to 6 from 5.

Candidate wheat varieties hoping to enter the list next month performed well with most (11 out of 19) having a disease rating of 8 or 9, and no varieties with a rating of below 6.

Use the table below to search for the wheat varieties you are growing and see how the yellow rust ratings are affected.