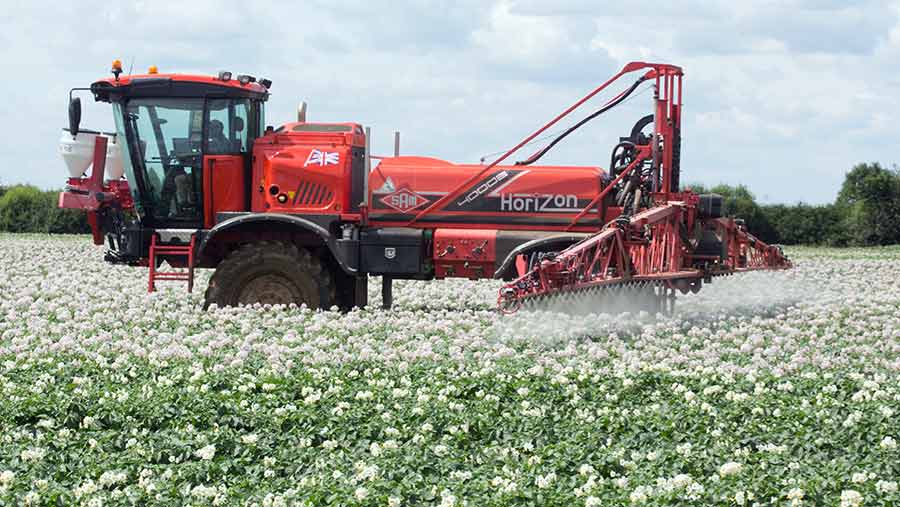 Potato farmers are likely to find tuber blight control more challenging this season, after a surge in the reported occurence of the fluazinam-resistant “dark green” strain of the disease.

The incidence of infection in 2017 soared to 24% of infected samples submitted for testing from just 3% the previous year, when the 37_A2 strain was first discovered in the UK.

“Aggression is the amount of damage a disease causes its host,” says independent agronomist Eric Anderson of Scottish Agronomy, “and this strain is highly resistant [to fluazinam] and highly aggressive”.

Although the potato industry has 11 effective modes of action in total for blight control, the loss of this particular chemical as a late-season option will be keenly felt.

That’s because fluazinam-containing products are one of only a small number of options for green-top lifters with no harvest interval.

A common alternative, Curzate (cymoxanil + mancozeb), has also had a recent label change to amend the latest application time to the beginning of leaf yellowing.

‘Accelerating towards a car crash’

Growers will need to adapt their whole fungicide strategy rather than go down the road of using the same products more frequently, as Mr Anderson says overuse of the same active is one of the swiftest ways to lose it.

“We have been guilty of overapplying certain actives and accelerating towards a car crash,” he warns, explaining growers should rotate not just different actives, but different modes of action, to retain chemicals for as long as possible.

Fluazinam had been most commonly used as a partner to diquat in the late season burn-off slots, but he will be recommending growers remove it from their blight control programmes and only use it to combat other fungal diseases in the future. 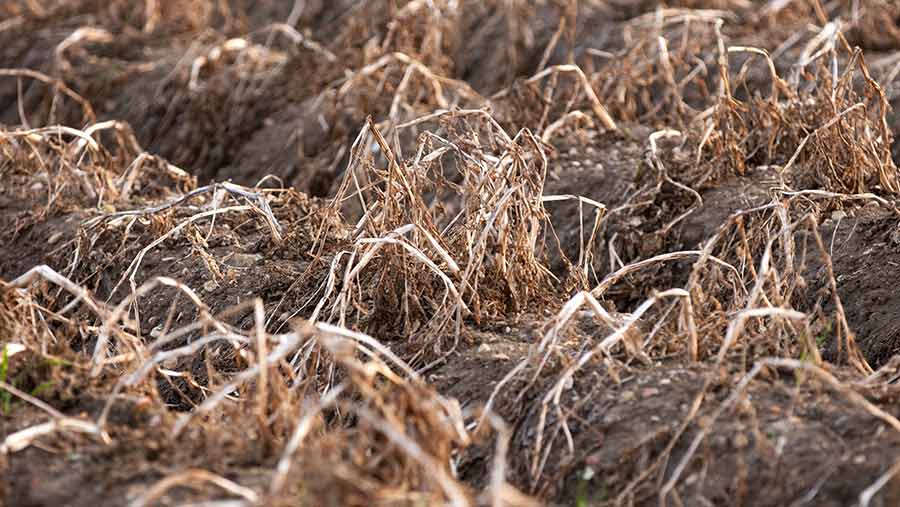 “I will be using Tizca for powdery scab control. It is right and proper we continue to use use fluazinam products for sclerotinia. [But] if using it for that, please use it with a robust foliar blight fungicide,” says Mr Anderson.

Other late slot options include Infinito (fluopicolide + propamocarb hydrochloride) and Ranman Top (cyazofamid), with the former recommended for the first burn-off spray, and the latter the second.

That’s because the wetter in Ranman Top can increase the speed of desiccation and heighten the risk of vascular browning in a rapidly growing crop, but by the second spray the plant will already be shutting down, with the risk at that timing being much lower.

The industry has been bolstered by a new blight product joining the ranks this year with the approval of Zorvek Enicade (oxathiapiprolin), from DuPont last month.

It offers a completely new mode of action and is likely to be targeted at the rapid crop canopy stage of the programme, but must be applied in a tankmix with another fungicide.

Another product coming to the market on a limited release this season is Bayer’s Emesto Prime containing the SDHI penflufen which will be a planter-applied powder treatment for the control of black scurf.

It offers improved control rates over existing products such as Rhino (flutolanil) and Monceren (pencycuron) and also shows some control over silver scurf.

Ed Hagues, campaign manager for root crops with Bayer says  the product, which was initially pencilled in for a 2012 launch, will take black scurf control rates to just under 90%.

The product was already available in a liquid format, but many growers prefer a powder application as it avoids handling the seed potatoes an additional time, as liquid needs to be applied while they are still in store.

Mr Hagues says there will be a limited release of Emesto Prime this season at about 10% of the Monceren volume, with 1kg of product needed per tonne of seed tubers, and sowing of treated seed restricted to 5t/ha. A full release is anticipated in 2019.

Eric Anderson highlighted six actions from the Fungicide Resistance Action Group UK that potato growers can take to make sure that they retain the use of products for as long as possible:

All speakers were attending the recent Bayer Potato conference held in Peterborough.