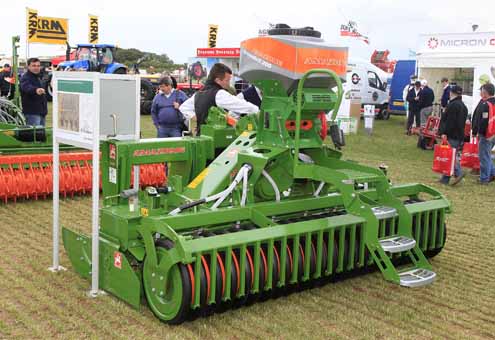 A wide array of new and updated machines from many of the agricultural industry’s leading manufacturers will make their debut at next month’s Cereals event.

In addition to the hundreds of stands displaying the latest equipment, some machines will be brought to life in the 10ha Working Demonstration Plots. “Anyone looking to invest in new machinery, whether they are looking to upgrade a machine or re-equip on a larger scale, should find exactly what they are looking for,” says event director Jon Day, of Haymarket Exhibitions.

Plenty of tractors are making their Cereals debut. Kubota UK will show its new M110GX and M135GX machines. The range-topping M135GX has a high-comfort cab, a new 24×24-speed semi-powershift transmission and a fully-suspended front axle.

McCormick distributor AgriArgo UK is unveiling a five-model range of six-cylinder tractors. The X70 series spans 150-232hp with power boost and is powered by a “leaner and greener” version of the 6.7-litre McCormick BetaPower engine.

New Holland’s recently introduced T6 tractor – models range from 119 to 175hp – will feature alongside its bigger brother, the T7, giving visitors a chance to see the ECOBlue SCR (Selective Catalytic Reduction) NEF engines, with up to 10% lower operating costs.

They can be specified with Dyna-6 Eco, semi-powershift or Dyna-VT continuously-variable transmission. All are equipped with the latest Agco Sisu Power e³ engines.

Claydon is displaying its new oilseed rape drill, the V Rape Speed, which establishes oilseed rape directly into uncultivated stubble. The machine has a working width of 5m and is fitted with patented two-tine strip-till legs mounted at 60cm row spacing.

Weaving has developed a smaller zero-till drill for small to medium-sized farms. The 1.5t hopper version is available in 3m or 4m versions and only needs 100hp to pull it. It can plant all seed sizes, from oilseed rape to beans.

By contrast, Amazone’s new 15m-tine coulter Condor 15001 direct drill has a hopper capacity of 8,000 litres and will require at least 270hp upfront. A daily work rate of 150ha is possible, the company claims.

Several new cultivators will be on show for the first time at Cereals, including Teagle’s trailed 4m folding version of the Multidisc Vario. This combined disc and tine cultivator offers variable on-the-move tillage intensity, saving fuel and reducing downtime between different operations.

The firm is also launching its R6 plough suitable for 180-280hp tractors and available in four or five furrows.

Opico is unveiling the Puma, a new folding rotary cultivator from Maschio for 120-200hp tractors – at 3.2m, 3.7m and 4.2m – with a variety of tine and roller options. The firm is also showing the 18.3m five-section HE-VA King Roller.

Krone has achieved higher output on the BiG Pack HighSpeed baler by increasing the throughput capacity of the variable feed system (VFS) by 18% and the stroke frequency of the piston plunger on the BiG Pack 1270, 1290 and 1290 HDP models.

The Bellima baler is Krone’s low-maintenance, fixed chamber round baler, featuring the camless 1,400mm EasyFlow pick-up. New Holland has chosen Cereals to launch the successor to the BB9000 big baler, but is keeping details under wraps until the event.

A range of clever new electronics, including more state-of-the-art precision farming tools, are being shown at Cereals.

Teagle is offering variable-rate spreading on its Centerliner SXC range via a touchscreen Blackbox from Patchwork. The SX range can hold up to 5x600kg bags and spread to 24m.

Agrisem front-mounted seed and fertiliser hoppers with variable-rate electric drive and GPS are also on show, while Horstine has developed a new generation of Airstream pneumatic fertiliser applicators with updated software that allows variable-rate application.

CLAAS UK has expanded its UK RTK (Real Time Kinematics) signal network and is increasing the signal strength. The company is also introducing a new base station, providing an open signal accessible by any RTK receiver using CMR+.