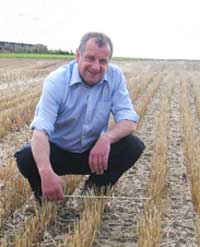 “Daylight” barley trials on an Aberdeenshire farm are being extended to 16ha following an 8% yield increase in this year’s 2ha trial plot.

The Boost/Pearl blend, sown at 25cm (10in) spacing to allow more daylight into the crop, yielded 11.1t/ha of grain dried to 15% compared with the control plot sown at five inch spacing which yielded 10.4t/ha. Both plots received identical fertiliser and fungicide treatments.

The growing crop was one of the major points of interest at the Royal Northern Agricultural Society’s Crop Tech 2009 event on the farm of Ian Davidson (pictured) at Moss-side, Oldmeldrum, in June.

The results of the trial have confirmed Mr Davidson’s theory that heavy crops won’t yield to their full potential unless more daylight is allowed into the heads and persuaded him to take the bold step of sowing a whole 16ha field at 25cm spacing.

“The matted heads in thick crops prevent daylight from getting through the crop canopy to the berries below which can be a third lighter than the berries at the top of the stem,” says Mr Davidson. “The lower berries fill out when they get daylight resulting in an even heavier crop. An 8% yield boost – at no extra cost – is significant and worth going for.

“Getting more daylight into my crops is my number-one priority at the present time.”

However, it is probably not worth it with 7.5t/ha crops as the heads will be open enough to allow daylight in.

The wider spacing is achieved by blocking off every second coulter on the drill. Mr Davidson believes there may also be an opportunity to reduce seed rates.

“I halved the seed rate to 0.75cwt/acre (94kg/ha) at 10in spacing in one plot, but this was too severe and the plot yielded 10.25t/ha, the same as the farm average for winter barley. The saving in seed cost was only £8 so it wasn’t worth it.

“Somewhere in between is probably about right so I’m reducing the seed rate in one plot this year by 30% to just over a cwt (125kg/ha) and also reducing fungicides in some plots by 50% to see what happens.”

With the hybrid varieties, Boost and Volume, the seed rate is being reduced even further to only 62.75t/ha (0.5cwt/acre) compared with the recommended rate of 94kg/ha (0.75cwt/acre).

“Why over the years have we gone from 8in or 9in to 5in spacing?” Mr Davidson asks. “There’s an opportunity to save on seed costs and at the same time increase yields by allowing more daylight to reach the crop.”

A second trial on the farm where only slurry from Mr Davidson’s pig unit and 125kg/ha of urea was applied also attracted interest at CropTech. The 2ha plot yielded 10.1t/ha but the £40/ha saving in fertiliser cost made it a worthwhile option, according to Mr Davidson.

Further comparisons of slurry against nitrogen at different rates of application will be made in this year’s trials.

Interesting results have also been obtained from wheat/barley blends which Mr Davidson has grown commercially for the past four years. The 18ha of early drilled Cordiale/Saffron blend, sown last autumn on 22 September, yielded a disappointing 8.5t/ha as the Cordiale failed to fill out during bad weather at the flowering stage.

“I’m dropping Cordiale and looking for another suitable wheat to replace it,” says Mr Davidson.

The wheat/barley blend was originally introduced to see if cereals could be grown continuously as a time when oilseed rape was giving poor returns. The trick, he explains, is to select an early wheat variety and a late barley variety to reach maturity at the same time so that treatments – especially the application of growth promoters – are effective for both.

Disease pressure is effectively halved as diseases which affect barley but not wheat, and vice versa – such as net blotch in barley and septoria in wheat – have further to “jump” to spread.

Wheat/barley blends have given Mr Davidson his highest yields in recent years but they may not be necessary in future if his barley crops yield higher as a result of wider spacing.