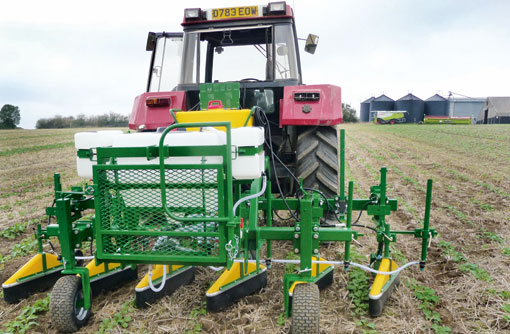 Different ways of establishing the crop and the impact of row width on yield are being investigated within Agrovista’s Grow Crop Gold programme, with early results suggesting that wider row spacings are feasible.

Two main machines, Simba’s DTX fitted with a Turbojet Wizard and Vaderstad’s Topdown equipped with a Biodrill, have been modified for the trials.

Mr Hemmant stressed at last week’s Grow Crop Gold growers’ meeting at Cirencester that the work was not intended to prove that one machine was more effective than another, but rather to examine several combinations of row widths, seed rates and banding, the latter offering scope for cutting autumn nitrogen fertiliser needs and using inter-row cultivations or herbicides (see below).

Earlier work with a sugar beet drill had highlighted the potential of precision-sowing the crop, noted Cotswolds-based Tim Bullock. “But that wasn’t really practical. So we’re trying to achieve that type of precision drilling with the sort of kit growers already have on farm.”

For last season, the DTX machine was used to compare normal and half seed rates sown conventionally, ie via spreader plates, or in tighter bands.

Overall there was no difference in yields, irrespective of seed rate or variety – conventional or hybrid – although the banded crop tended to branch more, especially at the lower seed rate.

“So we can be confident that switching to banding has no yield penalty,” said Mr Hemmant. “And it gives us the opportunity to treat the bands and the ground between them differently.”

To assess the impact of sowing the crop in rows 12.5, 25, 50 & 75cm apart the Topdown was modified by blocking coulters and extending the delivery tubes to drop the seed closer to the soil.

The effects of sowing rates measured as seeds/sq m and seeds per metre of row length were also compared.

“Wide row spacing certainly gives you a good idea of how many [rape] volunteers you have,” noted Mr Hemmant.

The results showed yields tended to decline as row width increased, especially where weeds were troublesome, herbicide responses being much better in the wider row spacings. But provided establishment and weed control were good, wider spacings were feasible.

The important point was to avoid competition between plants within the rows, explained Mr Bullock.

In last season’s trials, crop establishment declined at seed rates above 17/m of row; however fixing the rate in that way (as opposed to sowing per square metre) did not reduce yield.

Indeed a plot in 12.5cm rows sown on 1 September at only 2.5 seeds/m of row had produced a stand of strong plants. “It has worked well with a green area index (GAI) of just under 1.5 now,” said Mr Bullock. “The question is how many people would dare try that.”

Inter-row spraying of oilseed rape with broad-spectrum contact herbicide diquat has shown promise in Agrovista trials this season. The technique could help should further restrictions on residuals ever be introduced.

The key challenge was to develop equipment, originally designed to work on “billiard table” seed-beds, which could work faster in broad-acre crops, he explained.