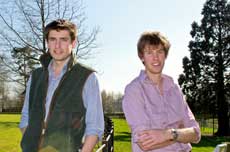 A team of four Norfolk growers has won the grower team category of the 2011/12 Farmers Weekly and British Sugar Beet the Best competition.

The team of four included Mark Gilbert, Mark Means, Joe Martin and James Caley. They all provide sugar beet contracting services, as well as being farmers in their own right.

“We found the competition a little trickier than last year,” says Mr Gilbert. “But it’s a great way to get you thinking about your sugar beet husbandry.”

The team managed to answer all the multiple-choice questions correctly through the three rounds, showing a broad knowledge of all the processes required to produce an optimum sugar beet crop.

The team gave a very precise answer to the final open question, which asked contestants to outline the challenges and opportunities the UK sugar industry faced beyond 2015, if sugar quotas were removed.

The challenges the team outlined were: “Increased competition from cane sugar and from within the EU, price volatility and lack of confidence to invest in machinery.”

“UK factories are at maximum output already, with European competitors having spare processing capacity to increase production when quotas are removed.”

They also outlined the challenge of increased weed, pest and disease pressures due to much tighter rotations, and the need to reduce the cost of production to compete on a global market.

Opportunities for the team were: “Greater use of technology such as GM and increasing area of sugar beet grown for economies of scale.”

The increased use of sugar beet as an energy source in ethanol production was also seen by the team as an opportunity to increase production, meeting the rising demand for greener energy.

British Sugar and the NFU have been delighted with the continued success of the Beet the Best competition this year, said Paul Bee, communications manager for British Sugar.

“The other judges and I were considerably impressed with the level of knowledge, particularly in the open question in the final round,” said Mr Bee

The winners are to go on a study tour of Spain to look at spring and autumn-sown crops in the north and south of the country, and also processing and research facilities.

There will also be smaller Beet the Best competition at the Cereals event (13-14 June), with further exciting prizes available. Last year the winner received tickets to the Formula 1 Grand Prix at Silverstone.