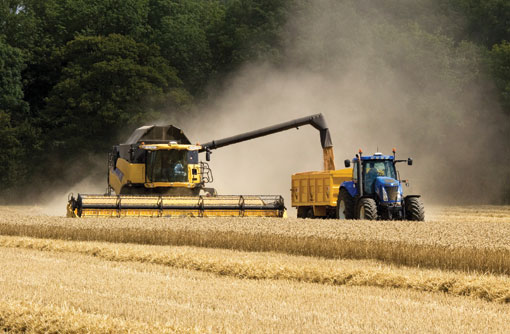 There has been much debate in recent months on increasing wheat yields to meet rising global demand with “sustainable intensification” becoming the new buzz word.

However, the UK average wheat yield has remained largely unchanged for some years at about 8t/ha (see graph). This will need to increase if Britain is to do its part in meeting the demands of a growing global population.

UK farmers are among some of the highest yielding in the world and last year a number of farmers broke their own farm record yields, such as Martin Boulden who topped 15.05t/ha for a field of Claire on Romney Marsh, Rod Smith in Northumberland saw one field average 14.8t/ha and David Hoyles achieved 14.3t/ha in Lincolnshire.

Despite this, the official world record is still held by Mike Solari in New Zealand for a 15.637t/ha crop of Einstein. But it’s time that a UK grower claimed the crown and showed the world that UK growers do have the highest technical crop growing skills. 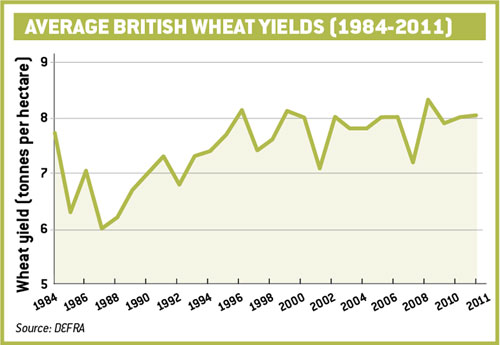 That is why Crops Magazine is launching its “Winning with Wheat” editorial campaign, aimed at arming readers with the latest advice to produce a record-breaking wheat crop in 2012.

So what can you do to replicate these successes seen last year? Clearly, good soil type and ideal weather conditions play a massive role in crop development, but there are other factors which farmers can bring into play.

The first consideration is variety, says Mike Warner at Avocet Agronomy. “Choose your variety according to soil type and inherent yield potential, and sow as a first wheat, ideally after legumes.” Seed dressing, seed rates and drilling dates should be tailored accordingly, and soil organic matter and nutrient indices – including trace elements – should be at optimum levels. “Protect plant numbers from slugs, and use a pre and post-emergence herbicide to target the most competitive weeds early on.”

Crop nutrition is hugely important, and Mr Smith swears by chicken muck at Beal Farm, Berwick Upon Tweed, Northumberland. Last year a 26ha field of Viscount averaged 14.8t/ha. It was drilled at 160kg/ha into optimum conditions, and never looked back. The weather was ideal, with a dry and sunny spring, and once we saw its potential we threw everything at it.”

Mr Smith samples his soil regularly, and applies fertiliser in conjunction with yield mapping on the Claas 670 combine. “We believe in keeping the P and K indices up with chicken muck, and just top up where necessary.” He used three applications of nitrogen and five sprays of fungicide between 28 September and 20 June. “It was very slow to combine; you couldn’t get to the end of the field without unloading.”

Anyone with a crop that has emerged from the winter in good shape should plan now to optimise yields, says independent agronomist Patrick Stephenson. “Apply the right amount of fertiliser for yield expectations: crops are quite forward now, so you may want to starve off tiller numbers if the head count is too high.”

Although there has been little septoria in recent years, it is always a threat, especially if the weather turns wet. “With wheat at £150/t it does pay to have a four-spray fungicide programme.” Plant growth regulators will also be necessary for most crops. “And keep an eye out for pests like orange blossom midge and wheat bulb fly. Don’t wait for the damage to be done – use the alerts and treat the crop as the peak risk period arrives.”

Grade One silt, ideal sowing and nitrogen timings were behind Mr Hoyles’s 14.3t/ha field of Invicta at Monmouth House Farm, Lutton, Lincolnshire, last year. “I think it was quite a lot of luck and a little bit of judgement. I top dressed it with 30kg/ha of nitrogen at the end of February, which helped with the drought we had – a lot of the later applications didn’t get washed in for a while.”

Sown after potatoes at a seed rate of 125kg/ha, the crop received 160kg/ha of nitrogen and a four-spray fungicide regime. “We soil test in February and formulate our strategy depending on what the crop looks like. We’ve also got a new John Deere C670i combine, which has been fantastic – we only lost 50kg/ha over the back – that’s about 0.3-0.4% of the crop, which we were very happy with.”

“Last year we were trying to get as big a yield as we could – we may do the same again this year, but I want to see the crop come out of the winter first,” he says. “If the potential isn’t there in March or April you’re just throwing good money after bad.”

Three adjoining fields of Oakley, each of 11.7ha and drilled after peas at 110kg/ha, clearly demonstrated the benefits of irrigation and extra nutrition. The unirrigated field averaged 8.25t/ha, while an irrigated field, which received the same four-spray fungicide treatment and same 194kg/ha of nitrogen fertiliser, yielded 13.1t/ha. The third field received extra nutrients and came off at 14t/ha.

“The irrigated crop used nearly 2.5 times as much water than the unirrigated one, and was still drawing water as it was ripening in August,” says Mr Solari. “But it cost £75/ha to irrigate – at £200/t for wheat that’s a no-brainer, but if energy costs rise and wheat prices fall it may not be so worthwhile.”

Mark Tucker, head of agronomy at Yara, reckons the key to bumper yields is optimising the head count at 600-700 ears/sq m. “Focus on the amount of nutrients delivered between February and April.” RB209 recommends 220kg/ha of nitrogen for an 8t/ha crop – every tonne above that can justify an extra 20kg. “Apply little and often rather than in big hits, with extra potash to enable nitrogen uptake. If you’re not irrigating, target an appropriate yield – there’s no point chasing yields with high nitrogen if the field has soil issues or drought.

“Everything has to be right – big crops can put pressure on disease management due to the high nitrogen and dense canopy, so you have to keep on top of that. It’s all about constant monitoring of the soil and crop and responding appropriately.”

Winning with Wheat – the campaign

Over the next six months, we will be providing you with best-practice advice and information on managing wheat to help you produce a record-breaking crop. So whether you are looking to break your own farm record or take the world record title, Crop magazine is the place to find the valuable information that you need to achieve this.

As well as technical articles featuring top tips from leading industry experts, there is also the chance to share your tips and thoughts on the essential ingredients for a record-breaking wheat crop. Go to www.fwi.co.uk/winningwithwheat